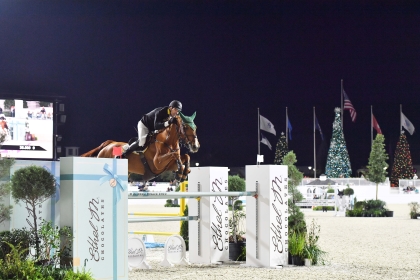 World-renowned course designer Peter Grant (CAN) shaped tonight’s tracks that tested riders throughout the course with a winding track that covered the entirety of the WEC Grand Arena. As the first round concluded, an even 14 representatives from six different countries prepared to battle it out over the short course.

Santiago Lambre (BRA) secured four of the 14 spots in the jump-off and found a clean jump-off on two.

Lambre and his own Pampero (Chacco-blue x Nekton) were the first pair down the ramp into the WEC Grand Arena to attempt Grant’s jump-off track. Lambre and the 12-year-old Oldenburg gelding flew around the course finding every fence right out of stride to stop the clock at 39.938 seconds.

Five competitors followed, all giving the track their best effort, but none were able to snag Lambre and Pampero’s quick time, until Rowan Willis entered the arena aboard his lifelong partner Blue Movie.

Willis and the 16-year-old Anglo-European Sport Horse mare started on a powerful gallop at the sound of the tone, “I knew if I kept traveling and stayed tidy in my turns, I had a good chance. ‘Carrots’ has been jumping incredibly and she’s so naturally fast, I trusted her to take the risks.”

The pair flew through the short course, slicing the World Equestrian Center vertical at an incredible angle to keep on stride and soar through the remainder of the track in an unbeatable 38.201 seconds.

Willis is thrilled to be back at World Equestrian Center – Ocala, “I have been traveling a lot lately, and my horses just made it back to Ocala this week. I got back at 4am this morning, but luckily, I have the best team behind me, and they had Carrots here waiting for me. Robert, my groom, has been with us since the very beginning and knows Carrots inside-and-out. I can’t thank my team enough,” expressed Willis. “It feels great to be back jumping in that arena. The atmosphere here is unlike anywhere else and I am looking forward to the winter circuit.”

Blue Movie is Willis’ tried and true mount, “I always knew Blue Movie was going to be special ever since she was a foal. It took me a very long time to figure her out, but my patience was paid, and she took me all around the world. She was a live changing horse for me,” said Willis.

Six other competitors tried to find Willis and Blue Movie’s quick time and only Santiago Lambre came close aboard his own The Diamant Rose Z (Toulon x Diamant Z). Lambre and the 11-year-old Zangersheide mare navigated a speedy jump-off in 40.328 seconds to slide into the third-place spot on the leaderboard.

An additional $5,000 was awarded to the fastest four-faulter of the $100,000 Ethel M Chocolates National Grand Prix. Aaron Vale and Thinkslikeahorse’s Cristo Beech snagged the award with a quick time of 77.814 seconds with one rail down.

Bryn Sadler received the ‘Luck of the Draw’ award.