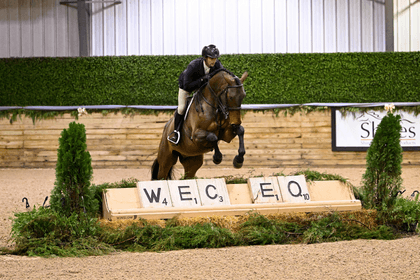 Wilmington, Ohio – The first special feature class of Winter Classic #3 at World Equestrian Center – Wilmington called all professional athletes to the R+L Arena to switch disciplines for the day. Twenty-two riders went head-to-head over Joseph Carnicom’s (USA) technically set track in the WEC Professional Medal 3’. The class offered professional athletes an opportunity to apply their well-practiced skills in one of the most competitive disciplines for junior and amateur riders. At the conclusion of an over fences phase and a flat phase, it was Sam Pegg (CAN) who secured the coveted Champion title.

The class offered special prizes to the top three on the podium. The winner was gifted a brand new GOTRAX Electric Scooter, while the second and third place finishers received a free stall for a week of showing at WEC – Wilmington

The 12-obstacle track included many technical questions and opportunities for the riders to showcase their technical skills. Starting out with a long bending line right away from the gate, a rollback to a two-stride combination, and an option element at the end of the ring, riders were asked to accurately meet each jump while maintaining a proper position. The judges invited all entries back to test on the flat, where they then asked riders to demonstrate a sitting trot, an extended trot, and working canter on the counter lead.

Pegg of Ten Sixty Stables in Uxbridge, Ontario, entered for the flat phase sitting in second place. He piloted Riece Locke’s Lord Quality to a textbook equitation round, taking each inside track while maintaining a steady pace through the entirety of the ride. “My plan stayed pretty much the same as when I walked it. This horse has a lot of experience, so I was aiming to be in the top standings after the jumping round, so I made all the inside turns and was able to be a little bit aggressive,” Pegg comments on his over fences round.

After jumping to an 89 over fences, the duo was behind by just one point. In an attempt to move up the ranks and top his fellow experienced professionals, Pegg demonstrated pristine flat work in the second phase of competition. He wowed the judges with his ability to finesse difficult questions and maintain his proper position to take home the win in the WEC Professional Medal 3’.

“This class was great, and it had just about the same amount of people watching as the grand prix! This show does a lot of fun stuff like this for exhibitors, and it keeps people interested,” shared Pegg on the WEC Professional Medal.

Sitting in a close second place was respected trainer and judge, Troy Hendricks (USA). With a high score of 88 in the over fences phase, Hendricks of Glenmoore, Pennsylvania, was looking to move up the ranks in flat phase. Aboard Deirdre Agnew’s 7-year-old Oldenburg gelding, Confidant, Hendricks executed his expert skills to climb from third place to second place in the second round of competition.

Third place was awarded to Jennifer Schwartz (USA) of King of Prussia, Pennsylvania. Schwartz was the only competitor in the field to make the indirect inside turn to the final fence on course. The judges awarded her handiness with a score of 87.5 to put her in fourth place at the conclusion of the jumping phase. Sitting atop Piper Kennedy’s 12-year-old Swedish Warmblood gelding Swoon, she was quiet and elegant on the flat to move up the leaderboard for the yellow ribbon.