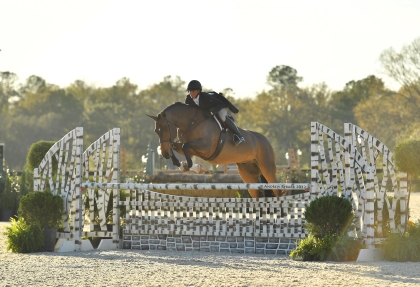 Schaefer and the talented 12-year-old Warmblood gelding were the 19th pair to try their hand at Grant’s first round course, producing an effortless trip for a score of 89.

“I wasn’t able to walk the first course because I was riding at the time, but once I saw it, I had to go over it about 500 times because it was so long,” laughed Schaefer. “It ended up riding really well and flowed nicely.”

Schaefer and In The Know were the third to last pair to return to the handy, “When I first looked at the handy, I was wondering how it was going to flow, but it actually rode really well. There were a few places that made you think about your track, timing and rhythm. One jump would set up the next.”

The pair jumped fence one with ease and rolled to fence two to take a tidy inside turn to the high option hedge wall, “I got lucky. I think the course suited a left leaded horse and Spyder [In The Know] is very left leaded. I jumped the second fence a little bit the wrong direction so I could give myself a stride or two back to the hedge. He jumped it perfect,” said Schaefer.

Schaefer and In The Know soared over the last fence in perfect from to earn the class’s highest handy score of 93 for a two round total of 182 for the win.

Thirty-one entries took to Hunter 1 early this morning to compete for the blue ribbon the $15,000 WEC Ocala Open 3’ Hunter Derby, but it was Katherine Rinehart and Luke Rinehart’s Hero (Brainpower x Corini W) that emerged victorious.

Rinehart and the 10-year-old KWPN stallion navigated a stunning first round, jumping all four high options with ease to earn a score of 87.5.

“Hero is my son’s horse. We just got him last fall and he’s been great. Luke couldn’t ride this week, so he loaned him to me,” said Rinehart.

Rinehart and Hero returned for the handy, “ I was a little nervous about the trot jump because it is a bit of a sharp turn to it and then it had spooky elements after. He ended up landing left, so I had to do a lead change which wasn’t my original plan, but Hero made it work.”

Rinehart and the stunning Hero laid down a lovely round to earn a score of 88 from the judges, for a two round total of 175.

“The courses were so much fun today. I don’t ride very much and I have probably done four or five shows total since 2018, so coming out today was really nice. Now, I will go back into retirement until there’s another gorgeous day where I want to have some fun,” laughed Rinehart.

Forty-three horse-and-rider combinations hunted for the top prize in the $15,000 WEC Ocala 3’ Jr/Am Hunter Derby, but it was Molly Braswell and her own Balou Label that secured an exceptional two round, total 12 points higher than second place.

Braswell and the nine-year-old Holsteiner gelding out of Balou delivered a foot-by-foot perfect first round, jumping all four high options with total ease for a high score of 94.

“I enjoyed today’s courses because there weren’t many numbers. Tito [Balou Label] likes to jump high, so this was easy for him. I normally show him in the 3’6” A/Os but this is a long circuit,” stated Braswell.

Braswell and Balou Label were the last pair to return for the handy producing a lovely round, opting to take three high options for a score of 83 from the judges, for a total of 177.

“Tito is amazing. He always jumps in perfect form and has such a positive expression. I am so proud of him today,” said Braswell.

Before the start of the handy round in the $15,000 WEC Ocala 3′ Jr/Am Hunter Derby, Bill Rube presented the prestigious Style of Riding Award to Brendan Weiss, for his classic style and his sportsmanship. The recipient serves as a role model for preserving the integrity and tradition of equestrian sport. “This award is very special to me because the recipient of this award pays it forward both in and out of the show ring,” says Rube. Weiss received an elegant duffel bag and wore a pink rose corsage on his lapel throughout the handy round to signify his achievement.