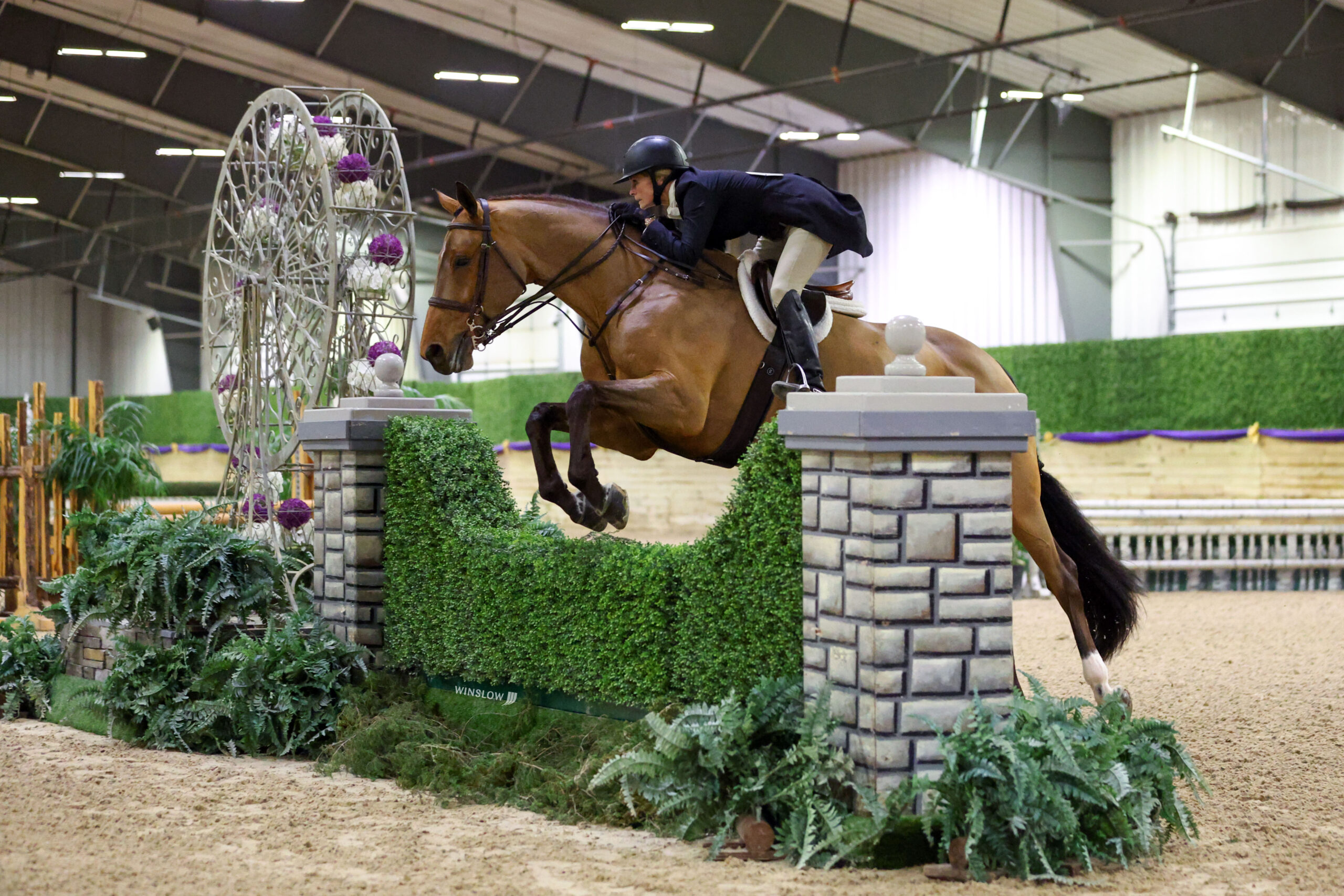 Wilmington, OH – Twenty-four elegant hunters took to the R+L Arena for the $10,000 USHJA National Hunter Derby 3’ Open competing in two rounds over a lovely course of natural fences designed by Bobby Murphy of Lexington, Kentucky. The competition was fierce heading into the handy round, but it was Meg Howard-Fuleky and Lissa Guyton’s News For You (I Am Moerhoeve’s Star x Boule De Neice IV) who topped the leaderboard.

Howard-Fuleky of Fox Meadow Farm in Temperance, Michigan, and the 10-year-old Belgian Warmblood gelding laid down a brilliant first round, taking all four high options for a score of  89.

The ring was refreshed and the top entries returned for the handy round. Howard-Fuleky and News For You were last to go in the jump-off, taking inside turns and all four high options with an elegant round that earned another score of 89, bringing their total score to 179, and making them the new class leader.

Rounding out the top three was Oakley Clark of Middlebury, Vermont, and his own Billy Irish (Guy Cavalier x Lady Mary) earning the judges scores of 82 and 85 in the handy for a combined 167 point third-place finish.

Kiera Phlipot of Manchester, Michigan, and her own Red Roc (Roc USA x Rhea) turned up the heat tonight, taking on a field of nearly forty competitors in the $10,000 USHJA National Hunter Derby Non Pro. The pair delivered their usual stylish performance in round one, laying down a near-perfect trip to earn a top first round score of 85 from the judges. Philpot and the thirteen-year-old Oldenburg gelding’s handy efforts were awarded a score of 84, for a combined total of 169 points and first place honors.

We caught up with Kiera after her big win “Paddy (Red Roc) was good as always. The course was really nice with a lot of opportunities to show off a good pace and gallop. There were several single jumps, which was nice. Being consistent, having a good rhythm and doing all of those things is so important… We are back this week and are working on qualifying for Devon! I also want to add- it is my coach’s birthday weekend. I dedicate this win to her, Dororthy Campbell!”

Second place was secured by Jenna Drago of Aurora, Ohio, and Sandriano (Sandro Boy x Cool Pearl Z), the pair navigated two smooth rounds, earning a first-round score of 80 and a handy score of 87, for a total score of 167.