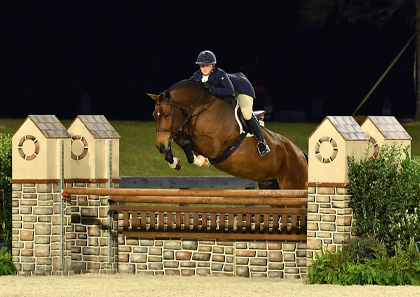 This week, we are delighted to include the prestigious Style of Riding Award in our awards ceremony at World Equestrian Center — Ocala. The Style of Riding Award is generously donated by Bill Rube to be awarded to the rider who best displays the American Style of riding in the ring and sportsmanship outside of the competition arena. The recipient serves as a role model for preserving the integrity and tradition of equestrian sport. “This award is very special to me because the recipient of this award pays it forward both in and out of the show ring,” says Rube. The Style of Riding Award includes a beautiful leather embroidered duffel bag along with a white corsage to be worn on the rider’s lapel during the handy round of the class. The award will be presented before the handy round of the $20,000 WEC Hunter Derby 3’6″ – 3’9″, the $15,000 WEC Hunter Derby 3′ Open or the $15,000 WEC Hunter Derby 3′ Non Pro each week throughout the remainder of the World Equestrian Center — Ocala Winter Spectacular 2021.

Nineteen entries took to the Stadium this evening for the $20,000 WEC Hunter Derby 3’6″-3’9″. Several entries earned scores into the 90s, but it was Samantha Schaefer and Madeline Schaefer’s In The Know (Arkansas x Cavelle) who earned top honors with a pair of scores in the 90s.

Samantha Schaefer and Madeline Schaefer’s In The Know (Arkansas x Cavelle) took to the course early in the order in the first round. Schaefer and the 11-year-old Warmblood gelding earned several blue ribbons in the Performance Hunters at the Winter Equestrian Festival just two weeks ago, preparing them well for tonight’s class. The duo set the standard for the class with a breathtaking first round, taking all four high options for a score of 91.

Christina Fisher and her own Levland (Levantos I x Olivia) also stood out in the first round of the $20,000 WEC Hunter Derby 3’6″-3’9″. Fisher and the 13-year-old Holsteiner gelding regularly earn ribbons in the Amateur Owner Hunters and brought their A-game to tonight’s class. The pair delivered a consistent, rhythmic first round, taking one high option for a score of 84.

The winners of Week 1’s $20,000 WEC Hunter Derby 3’6″-3’9″, William Coleman and Jill Grant’s Tropics (Diarado), returned to the Stadium tonight in an attempt to claim another victory. Coleman and the 10-year-old eventer-turned-hunter found their groove in the first round, taking all four high options for a score of 85.

The course was adjusted and the top 12 entries returned for the second round. The handy course presented several opportunities for inside turns, which the majority of entries chose to incorporate into their rounds. Fisher and Levland returned near the bottom of the order, finding a second flawless round for a score of 92, bringing their overall total score to 176 and moving them into the top spot. Coleman and Tropics were next to return for the handy round. The pair jumped each fence with plenty of style and earned a score of 88.5, bringing their total score to 173.5, sliding in just behind Fisher. Last to return were Schaefer and In The Know. The pair’s partnership showed on course as they worked together seamlessly to find distances and inside turns. They earned a handy round score of 93, bringing their overall total to 184, sending them straight to first place.

Schaefer took a few minutes to chat with us after the class, “This is my first day at World Equestrian Center — Ocala and I would say that it has started off pretty good. In The Know is a horse that I’ve had a very long partnership with. I know him better than any horse that I’ve ever owned. I had an idea of what the first round would feel like and I thought he was really good. The atmosphere changed under the lights as it got dark, but he’s pretty seasoned, so it didn’t bother him.”

Schaefer gave us some insight on In The Know, “He technically belongs to my sister, Madeline. He was supposed to be her equitation horse. He started doing the International Derbies while he was doing that job and we all agreed that he likes the derbies more. He now occasionally does the High Performance and focuses on these kind of premier events. He’s one of those horses that typically does best under pressure. He shines when it’s most important. I like to say that he’s my quarterback, I can call on him.”

When asked about her business, Schaefer responded, “I work with my mom, Stacey Weiss, at Shadow Ridge Farm in Ocala, Florida. It was originally her business when I was a junior. I went to school at Baylor for a few years and rode as an amateur for a few years after that. It became time to take the next step. I work with Kate Conover, so Kate and I do all of the teaching.”

Schaefer also added, “The vibe here is pretty incredible. I’m excited for this winter. To have something like WEC in your backyard is incredible. To be able to come here and compete for great money, but also enjoy your time is amazing. The facility is incredible and every ring feels special in its own way. Everything is clean and the people are friendly, I haven’t found one negative thing! We’re really appreciative of everything WEC is doing for this town and the sport.”

The $15,000 WEC Derby 3′ Open saw 26 entries vying for the win over Keith J. Bollette’s course. Competition was fierce with the top three placings separated by just one point, but it was Jeff Gogul and Abby Wagner’s No Doubt (Nerrado x Abba II) that nabbed the win.

Dorrie Douglas and MTM Farm’s MTM Dashing (Cascadello II x Jubilate) set a high standard early on in the class. Douglas and the 6-year-old Holsteiner gelding have been collecting ribbons in the Green Hunters, preparing them well for today’s derby. The pair navigated a lovely first round, taking all four high options for a score of 89.

Jeff Gogul and Abby Wagner’s No Doubt (Nerrado x Abba II) also found success in the first round. The 8-year-old Holsteiner gelding is a new mount for Gogul, but the pair were completely simpatico in the first round, finding every distance perfectly in stride with a lovely rhythm and taking all four high options for a score of 88.

Before the start of the handy round, the Style of Riding Award was presented to Dorrie Douglas for her style and sportsmanship. Douglas received an elegant leather duffel bag and wore a white rose corsage on her lapel throughout the handy round to signify her achievement.

Gogul took a moment to chat with us ringside after the class about his win aboard No Doubt, “It has been kind of a hiatus from showing for us because of COVID. I’ve only shown this horse in two rounds prior to this derby. He’s new to us. He is really a dream machine. His mom, Abby Wagner, is for sure his soulmate. We were so lucky to find him this year during Capital Challenge at World Equestrian Center.”

When asked about his plan on course, Gogul commented, “The goal was to have a brilliant round and learn to ride him at the same time. He followed my lead everywhere. I’ve never done a handy class on him, but I knew that I had to do all of the technical turns. He stayed with me perfectly. I had two plans because he perked up a little in the first round, but he settled nicely and was dead-on.”

Gogul also added, “We’re thrilled to be able to be at World Equestrian Center — Ocala this winter with everything going on. The footing couldn’t be better and the facility is amazing. This is our first week showing and we’re already having so much fun.”

This afternoon’s $15,000 WEC Derby 3′ Non Pro saw a field of 42 entries contest the course. For the second week in a row, it was Christopher Coberley and Fox Meadow Farm’s No Introduction that topped the class, earning an impressive pair of 90s scores. Coberley also earned 2nd place aboard Havens Schatt’s Actender PS (Action Breaker x Conpila) with a pair of 88 scores.

Coberley’s first ride in the class was aboard Havens Schatt’s Actender PS (Action Breaker x Conpila). The 8-year-old Oldenburg gelding regularly takes top placings in the Performance Hunters with owner Havens Schatt and was on-form for today’s class. Coberley piloted the handsome gelding through a foot-perfect course and over all four high options for a score of 88.

Coberley returned later in the order aboard Fox Meadow Farm’s No Introduction. Coberley and the 13-year-old Warmblood gelding have taken several ribbons in World Equestrian Center derbies, including the blue in last week’s $15,000 WEC Derby 3′ Non Pro. The pair was determined to continue their winning streak, taking to the course with purpose and navigating all four high options for a first round score of 91.

Madeline Jordan also found success in the first round aboard her own Congo MCF (Indoctro x Katynka). Jordan and the 10-year-old Continental Warmblood gelding took several top placings at the Florida Horse Park Winter Classic I recently and were well prepared for this afternoon’s class. The pair was flawless on course, taking all four high options for a score of 83.

The course was adjusted and the top entries returned for the handy round. Coberley returned early in the order aboard Actender PS to accommodate his multiple rides. The pair set a high standard with a second score of 88 for a combined total of 176, taking the lead. Jordan and Congo MCF returned about midway through the order. The pair was perfectly in sync, taking inside turns to fences 3, 6 and 7, and earning an impressive score of 91, moving into second place with a total score of 174. Coberley returned last in the order aboard No Introduction, still holding the top spot aboard Actender PS. The duo flowed effortlessly through all inside turns and soared over each high option, earning a score of 92 for an overall total of 183 to win the class for the second week in a row; and moving himself and Actender PS into a respectable 2nd place.

We caught up with Coberley after the class to hear about his rides, “I thought my horses went great and they did really good. I went with my original plan in the handy. I wanted to do the inside turns. Both horses did the inside turns well and went around the rest of the course well.”

When asked about his mounts, Coberley replied, “No Introduction is very sweet and playful. He wants to love on you all of the time. Actender PS is a very smooth ride. I’m really happy with both of them today.”