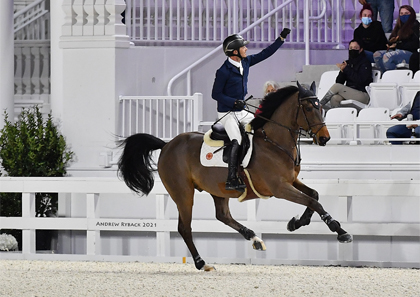 The World Equestrian Center — Ocala played host to top equestrian sport tonight with the $75,000 WEC Grand Prix 1.50m, and earlier this afternoon with the $7,500 Futures Prix 1.40m, both held in the WEC Grand Arena. An international field of competitors contested the two classes which features technical tracks designed by Anderson Lima of Brazil.

Thirty-two entries took to the WEC Grand Arena this evening to contest Lima’s technical track for the $75,000 WEC Grand Prix 1.50m. The course featured 16 jumping efforts including a skinny double combination, a triple combination and two liverpools. Eight entries jumped a clear first round and advanced to the jump-off. In the end it was Mark Bluman of Bluman Equestrian in Wellington, Florida, that captured the win aboard Daniel Bluman’s Mylords Bandit Del Keroytin (Edjaz Van’t Merelsnest x Byssa Del Keroytin).

Bluman and Mylords Bandit Del Keroytin secured a spot in the jump-off early in the first round. The 9-year-old Belgian Warmblood gelding is a newer ride for Bluman, but has experience in the 1.40m jumpers. The duo stepped up to the 1.50m tonight, easily finding a clear first round in 76.045 seconds, well under the time allowed of 80 seconds, signaling that they would be strong competitors on the short course.

Amateur Jordan Petersen and Derek Petersen’s Diamant’s Legacy (Diamant de Semilly x Courtney Love II) also nabbed a spot in the jump-off with a clear first round. Petersen and the 12-year-old Oldenburg stallion took 1st place in Thursday’s $20,000 Welcome Prix 1.45m and brought their A-game to the WEC Grand Arena again tonight, leaving all rails up in a time of 77.218 seconds.

First to return on the short course were Vale and Candro Van De Zuuthoeve. With all entries choosing nearly identical inside tracks, the pressure was on to go clean and clear. Vale and Candro Van De Zuuthoeve set a tough time to beat with all rails up 41.360 seconds, but did not hold the top spot for long. Bluman and Mylords Bandit Del Keroytin upped the ante, stepped on the gas and galloped through the timers with all rails up in 38.606 seconds. Petersen and Diamant’s Legacy took to the course near the bottom of the order. Knowing the time to beat, the pair blazed through the course, hugging the inside track. They stopped the clock with a clear round at 40.715 seconds, leaving Bluman and Mylords Bandit Del Keroytin in 1st place and moving Vale and Candro Van De Zuuthoeve to 3rd place.

Bluman took a moment to chat with us ringside about his win, “It is my first time here at World Equestrian Center — Ocala. I’m very impressed and very happy that we have such a facility in Florida. I’m originally from Wellington, and I came here just to see it. I had two rides in this class and both horses are very green and very young.”

When asked about his plan in the jump-off, Bluman laughed, “Honestly, it’s quite funny. I work with my cousin, Daniel Bluman, and he messaged my friend that came to the show with me and said that I needed to be conservative and just try to look for a clear round in the jump-off. My friend has known me my whole life and knows that I’m not going to drive here from Wellington to try to have a conservative round. I just went in and gave it my all. Mylords Bandit Del Keroytin worked with me well. I don’t even have words, I’m thrilled with the horse and with the class tonight.”

Bluman gave us some insight on Mylords Bandit Del Keroytin, “This is actually only my second show with Mylords Bandit Del Keroytin. He’s a great horse. He is 9 years old and came form a friend of mine in Europe. He had a lot of experience in Europe jumping up to the 1.40m. Tonight was a big step up for him becasue it was his first 1.50m class. Tonight was an amazing experience. We came here with a positive mind and everything worked out very well.”

He also added, “I want to thank the Roberts family for building this facility. I’m very happy that we get to enjoy it and come to horse paradise.”

The course for this afternoon’s $7,500 Futures Prix 1.40m featured multiple combinations and a liverpool. Twenty-eight entries contested the course with seven entries managing double clear rounds, although none could catch Tom Foley and The Helios Group’s Felex (Ustinov x Milexa), who blazed through the jump off.

A quick pace was set early on in the class by Kirk Webby aboard Tolleshunt Investment Group’s Brando Du Rouet (Baloubet Du Rouet x Carieny Z). The pair have taken top placings in several prix throughout 2020 and they were on form for this afternoon’s class. Webby and the 16-year-old Oldenburg gelding were the first to jump a clear first round, leaving all rails up in 74.708 seconds, well within the time allowed of 79 seconds. The duo continued straight to the jump-off, delivering a second clear round in 38.843 seconds, setting a tough time to beat.

The only entry able to catch Webby and Brando Du Rouet’s time was Tom Foley and The Helios Group’s Felex (Ustinov x Milexa). The 10-year-old Warmblood gelding is a new mount for Foley, but has experience in the 1.40m jumpers. This afternoon, Foley and the fiery black gelding jumped a fast, clear first round in a time of 75.347 seconds before advancing to the jump-off. Knowing the time they had to beat, the pair picked up pace on the short course. They stopped the clock with a clear round at 38.132 seconds, ultimately taking the win.

Not far behind Foley’s and Webby’s quick jump-off times was Marcus Gruenthal aboard Linda Bammann’s P.S. I Love You (Perigueux x Hauptstutbuch Antoinette). The duo earned 3rd place in last week’s $7,500 Futures Prix 1.40m and returned to the WEC Grand Arena this afternoon for another shot at the win. Gruenthal and the 8-year-old Oldenburg mare found a clear first round in 75.689 seconds, then continued to the jump-off. The pair jumped a second clear round in 39.455 seconds, sliding into 3rd place for the second week in a row.

Foley of Tom Foley Show Jumpers took a moment to chat with us ringside about his win aboard Felex, “Felex is a new horse for us, we only got him about 10 days ago. We just got to World Equestrian Center — Ocala on Tuesday and he won the 1.20m on Thursday. He stepped up and won again today, which was great. I would like to thank The Helios Group for the ride.”

Foley also added, “Hannah Murrin and I run our business out of Silver Creek, Georgia. It’s mostly sales along with some customers. It’s been great! We’re really happy to be showing at World Equestrian Center — Ocala. The footing is great here, the rings and courses have been excellent. The staff are very welcoming and helpful too. I have been to a lot of show grounds all over the world and I have never seen a place as amazing as this!”