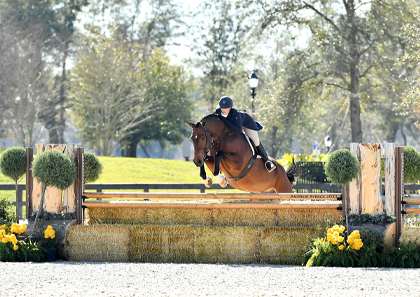 Schaefer and In The Know topped last week’s class with a pair of scores in the 90s. She returned to the Stadium this afternoon in hopes of claiming another victory. Schaefer and the 11-year-old Warmblood gelding laid down a flawless first round for a score of 92. The pair returned last in the handy round, taking inside turns and demonstrating their technical skills, earning a second score of 92 for a total score of 184 for the win.

Amanda Steege and Cheryl Olsten’s Lafitte De Muze (Darco x Everlychin De La Pomme) finished just behind Schaefer. Steege and the 10-year-old Belgian Warmblood gelding compete in the High Performance Hunters and have a lengthy resume of top placings in hunter derbies along with wins in the $50,000 WCHR Pro Challenge at the Capital Challenge Horse Show and the $50,000 National Horse Show Hunter Classic. The duo navigated a lovely, consistent first round for a score of 88, then returned for a stylish handy round, earning a score of 94 for a total of 182, taking 2nd place.

Grace Debney and Temple Equestrian’s Quimby (Q Verdi x Zanna I) rounded out the top three placings in the $20,000 WEC Hunter Derby 3’6″-3’9″. Debney and the 9-year-old Holsteiner gelding earned top placings at the Winter Equestrian Festival earlier this month and were well prepared for today’s class. The pair were impressive in the first round, earning a score of 86. They returned in the handy round with a foot-perfect effort that earned a score of 91, bringing their overall total to 177 for 3rd place.

Schaefer stuck around after the class to chat with us about her win, “It was a little bit of a different environment this week with the class going during daylight hours. I thought he felt even more relaxed in the ring today. I thought that the handy was really good. I ended up going inside after the oxer option. I hadn’t planned that, but that was just the way that the jump happened because he’s so adjustable and handy. There’s never a turn that he can’t do. He’s really rideable and pretty programmed to me, so we’re always on the same wavelength. I can’t say enough good things about him. He’s a horse that I’ve had for about five years, now. He started as my sister’s horse and transitioned to doing the USHJA International Derbies and really seemed to like that. That’s really his niche, now.”

Schaefer also commented, “Grace Debney is a student of mine and Kate Conover. It was great watching her have a very beautiful handy round and take 3rd place in such a competitive class. She’s a 16-year-old junior, so it was fun to watch her be successful in this class.”

Samantha Schaefer also found success in today’s $15,000 WEC Derby 3′ Open aboard R&R Hunter Horses, LLC’s Caristo (Casall x Bordeaux), taking 1st place against 25 entries. Schaefer and the 7-year-old Holsteiner gelding earned ribbons at the Winter Equestrian Festival in the Green Hunters this month and were on their game for this morning’s class. The pair delivered a lovely first round for a score of 92, then wowed the judges with a spectacular performance in the handy round, earning a score of 94, totaling 186 for the win. Schaefer also took 6th place in the class aboard her own Checkmate (Cassini II x Cornancer) with scores of 86 and 87.5.

Hillary Johnson and Copper Fox LLC’s Moonwalk (Quasimodo Z x Olavsca-F) were first in the order and set a high standard for the class. The 13-year-old KWPN gelding took top placings in the Amateur Owner Hunters at the National Horse Show in 2020 with Kendall Meijer and on his game this morning. Johnson and Moonwalk started off the class with an impressive score of 94, then returned in the handy, navigating a second beautiful round for a score of 86.5, totaling 180.5 for 2nd place.

Holly Shepherd and Triompf (Tangelo Van De Zuuthoeve x Etriompf), whom she owns with Loretta Patterson, returned to the Stadium again this week in hopes of another top placing. The duo took 3rd in the $15,000 WEC Derby 3′ Open during Week 2 of the World Equestrian Center — Ocala Winter Spectacular 2021 and earned scores of 87 and 89 for another 3rd place finish today.

Schaefer took a moment to chat with us about her win, “Caristo is a horse that I’ve been riding for about two months, now. He is owned by Meghan, Doug and Beverly Rohrbaugh. He does the 3’6″ greens with me and shows with Megan in the 3’3″ amateurs. He is a really fun, brave horse. He has probably never been in a ring this size or in an atmosphere like this, so this was a good test for him. He’s going to compete in the amateurs tomorrow and Sunday. We’re going to do WCHR week in Palm Beach next week, so this was good for him to gear up for that. I think he performed really well.”

When asked about her plan on course, Schaefer replied, “Hillary Johnson was on one of my all-time favorite horses and had an early lead in the class, so I was trying to chase that. In his first round I thought he was great and I was able to do some daring things in the handy. He was really game. He’s a super horse.”

Isabel Harbour and IMH Equine, LLC’s Fitz (Numero Uno x Kootje) topped a competitive field of 19 entries in today’s $15,000 WEC Derby 3′ Non Pro. Harbour and the 13-year-old Dutch Warmblood gelding show regularly in the Amateur Owner Hunters and Performance Hunters, and they were well prepared for today’s class. The pair delivered a fantastic first round for a score of 87, then returned with identical style in the handy round for a score of 88, brining their total score to 175 to ultimately take the win. Harbour also took 4th place aboard IMH Equine, LLC’s G. P. Burdell, earning scores of 76 and 84 for a total of 160.

Alliy Moyer and Daniel Bedoya’s Hero (Eldorado Van De Zeshoek x Peliana) were also impressive in today’s class. The 8-year-old gelding showed at the Winter Equestrian Festival earlier this month with owner Daniel Bedoya in the Schooling Jumpers 1.15m and took on the hunter ring today. Moyer and the handsome gelding were rhythmic in the first round, earning a score of 82.5. The duo returned for the handy round, hugging the inside track and finding each jump beautifully in stride for a score of 90, bringing their total to 172.5 for a 2nd place finish.

Christopher Coberley found success again this week in the $15,000 WEC Derby 3′ Non Pro. Coberley has been collecting top placings in the derbies throughout the past three weeks and piloted David Glefke’s Undercover (Untouched x Tosca) to a 3rd place finish today. Coberley and the 8-year-old Westphalian gelding earned scores of 86 and 85 with two lovely rounds.

Harbour took time to chat with us ringside about her win, “My first ride in the class was G.P. Burdell, who was one of my jumpers that we turned into a hunter. He’s loving being a hunter. He’s a good boy and super brave. Fitz is my old faithful horse. He’s always perfect and never changes, so I knew that I could trust him. Today was a lot of fun with them. I thought the course was very well done. It was fun to get a nice gallop and keep the flow. The footing is great, as well. It’s a great ring. Both horses are super handy, but Fitz is my number-one handy horse, so I can always do all of the inside turns.”

When asked about her horses’ personalities, Harbour replied, “G.P. Burdell is like a big puppy, he wants to be in your lap all of the time. I could say the same about Fitz, but he can also be a little quirky, sometimes. He has his moments, but he’s been my favorite for a long time. I used to do the equitation with him when I was a junior and we’ve done the big derbies. I’ve had him for about four years.”

Before the start of the handy round, the prestigious Style of Riding Award was presented to Alliy Moyer for her classic style and her sportsmanship. The Style of Riding Award is generously donated by Bill Rube to be awarded to the rider who best displays the American Style of riding in the ring and sportsmanship outside of the competition arena. The recipient serves as a role model for preserving the integrity and tradition of equestrian sport. “This award is very special to me because the recipient of this award pays it forward both in and out of the show ring,” says Rube. Moyer received an elegant leather duffel bag and wore a white rose corsage on her lapel throughout the handy round to signify her achievement.

Sally Stith-Burdette, Director of Marketing for Shapley’s, was on hand to present The Shapley’s Champion Groom Award to Haleigh Landrigan, groom of 9th place finisher Skorekeeper (Casall), for the best turnout in the class. Shapley’s is a proud sponsor of the World Equestrian Center and is thrilled provide an award each week of the Winter Spectacular to the groom of the best turned out horse. Landrigan received a Shapley’s Award Bucket for Skorekeeper’s stunning turnout.