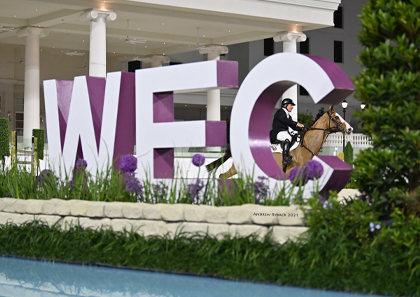 Vale and Major have found great success in the $75,000 WEC Grand Prix this winter, taking 2nd place Week 1 and 3rd place Week 2. Vale and the 13-year-old Danish Warmblood gelding were hunting for a win tonight, jumping a clear first round in 76.761 seconds, well within the time allowed of 79 seconds, securing a spot in the jump-off. Vale also earned a spot in the jump off aboard Taylor Granat’s Candro Van De Zuuthoeve (Thunder Van De Zuuthoeve x Walach Van De Zuuthoeve), delivering a clear first round in 77.983 seconds.

Mexico’s Santiago Lambre also nabbed a spot in the jump-off aboard his own Easy Girl (Conthargos x Nanina). Lambre and the 10-year-old mare took 3rd place in Week 1’s $20,000 Welcome Prix 1.45m and the pair were on-form tonight. They left all rails up in the first round in a time of 77.320 seconds, conserving plenty of energy for their second round.

Also securing a chance at the short course were Chile’s Samuel Parot and his own Dubai (Cardento 933 x Ozella). Parot and the 13-year-old KWPN gelding competed in CSI4* events in Wellington just one month ago, preparing them well for tonight’s track. The pair cleared each fence with ease, managing a clear first round in 77.525 seconds.

Parot and Dubai returned early in the order in the jump-off and were first to jump clear. The duo chose the inside track to fences 8, 15 and 16, and galloped through the timers with all rails up in 41.834 seconds, setting the time to beat. Vale was next in the ring with Candro Van De Zuuthoeve. The pair managed a quick, clear round, also taking the inside track, and stopped the clock just behind Parot and Dubai at 41.920 seconds. Parot and Dubai held the top spot until Lambre and Easy Girl took to the course. The duo chose to attempt all inside turn options, even taking a tight left turn to the final fence. Their efforts paid off as they crossed the timers with a clear round at 41.717 seconds, moving into the lead. Last in the order were Vale and Major. Knowing the time they had to beat, the pair picked up the pace and mirrored Lambre’s inside track. Vale and the scopey gelding flew through the timers at 40.470 seconds for the win in the class, moving Lambre and Easy Girl to 2nd, Parot and Dubai to 3rd and himself and Candro Van De Zuuthoeve to 4th.

Vale took a moment to chat with us ringside after the class “For Major in the first round, the 11 to 12AB line was tough, but I thought everything else suited him fairly well. I got a good ride into that line and he jumped it clear. The horses just jump great here; the footing is so good, the lights brighten the ring, the jumps are beautiful, so it’s just an atmosphere that allows for the horses’ best performance.”

When asked about his plan in the jump-off, Vale responded, “Major is naturally a pretty quick horse. Santiago had a pretty quick round, but nobody was crazy fast. I thought, as long as I didn’t make a mistake, Major would probably be quick enough to win. The course was suited to him, too. It was a great night with a great crowd.”

Vale also added, “Candro Van De Zuuthoeve, who was 4th, is a new horse for me. He was super. Mr. Incredible ticked the rail in the first round, but he’s a very young horse with massive ability, so he’s just getting experience. He’s an Olympic-caliber horse, but this is just his fourth or fifth grand prix.”

Today’s $7,500 Futures Prix 1.40m included a field of 39 competitive entries. The course for the class featured 15 jumping efforts including three combinations and a liverpool oxer. Nine entries advanced to the jump-off with six managing double clear rounds, but none could catch the duo of Hanna Toering and her own Balou Moon BHF (Balou Du Rouet x Coquette BHF).

The pace in the class was set by Kyle Dewar aboard Barbara Center’s Carmit T (Contant Q x Akvileja). Dewar and the 9-year-old Swedish Warmblood gelding took the blue in the Central Florida Hunter Jumper Association $5,000 1.30m Welcome Stake in early December and stepped up to the 1.40m today. The pair were quick and clear in the first round in 82.699 seconds, well within the time allowed of 90 seconds. They continued straight to the jump-off, keeping their pace and jumping a second clear round in 37.306 seconds, setting a tough time to beat.

Dewar and Carmit T held the lead in the class until Hanna Toering and her own Balou Moon BHF (Balou Du Rouet x Coquette BHF) took to the course. Toering and the 11-year-old Hanoverian mare earned top placings in the 1.30m jumpers at the Florida Horse Park Winter Classic II just two weeks ago, preparing them well for today’s class. The duo took their time in the first round, making sure to leave all rails up in 88.096 seconds. Toering and the fiery mare advanced straight to the jump-off, surging forward and hugging the inside track to each fence. They blazed through the timers at 36.803 seconds, moving into the top spot to ultimately win the class.

Rounding out the top three finishers were Mary Meghann Huitt and her own Cool Down 5 (Coronas x Zingold). Huitt and the 12-year-old Westphalian gelding finished 3rd in the $25,000 American Standard Grand Prix 1.40-1.45m in the October at Bruce’s Field II show and were on form for today’s class. The pair navigated a clear first round in 85.220 seconds before continuing straight to the jump-off. They also chose the inside track, managing a second clear round in 38.089 seconds for 3rd place.

Toering took a moment to chat with us after the class, “Thank you to everyone at World Equestrian Center, this show is done really well. The facility is amazing, the footing is fantastic, the jumps are great and everything is well done and so well thought out. The course designer did a great job today. The track was really good and the options in the jump-off allowed you to stay out if you had a younger horse or go tighter if you had a more experienced horse.”

When asked about her plan in the jump-off, Toering replied, “I was really happy with Balou Moon BHF today. She came out and felt great heading into the ring. In the jump-off, I was able to get her forward to jump 1 and get nicely down to jump 2. She was able to get nice and forward around to turn to 14, then she landed and kept going in the rollback to the one-stride combination. She jumped the vertical well, then was great to the final fence. She stepped up and helped me out a lot.”

She also told us about her special connection with Balou Moon BHF, “I’ve had her for her entire life, my family bred her. I started her as a 3-year-old and this is her second year competing in the 1.40m. It’s nice to be able to spend so much time with one horse, and to develop and grow with them.”

Toering also added, “Thank you to everyone at team Showcase and to Terry Brown for helping me so much with this horse. It’s really nice to work with such amazing people that really want to better the horses and better themselves. It’s a great environment to be in.”