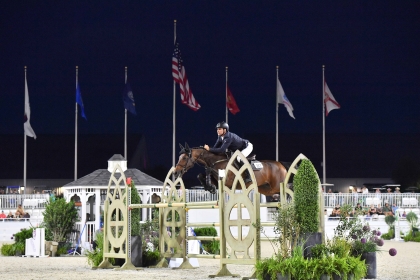 Ocala, FL – World Equestrian Center – Ocala was filled with buzz this evening as people packed the stands to watch the highlight event of the week, the $100,000 Hampton Green Farm National Grand Prix. FEI Level III course designer, Joey Rycroft (CAN) crafted the intricate track where 13 found the key to a clear first round. The competitive jump-off field was no match for Brazil’s Santiago Lambre and All In Horses and Jan L. De Waard’s All In Horses Cava, who celebrated their second feature class victory of the week.

Athletes from 13 nations were tested over Joey Rycroft’s first round track with an imposing triple combination and tight time allowed that stumped quite a few riders throughout the night. At the end of the first round, five countries prepared to fight for the lion’s share of the prize money in the jump-off.

Lambre managed to capture three of the 13 spots in the jump-off aboard Chacco Blue II, Pampero and All In Horses Cava. Lambre returned to the jump-off first aboard the 15-year-old Oldenburg stallion Chacco Blue II (Chacco-blue x Naiti Rouge). “Chacco Blue II isn’t my fastest horse, but he has a huge step, so I used that to my advantage.”

The pair flew through the timers in 40.547 seconds which held the lead until Kristen Vanderveen entered the arena aboard Bull Run’s Jireh (Uriko x Conella) owned by Bull Run Jumpers, Inc.

Bull Run’s Jireh was the youngest horse in the class, and it happened to be the eight-year-old Holsteiner gelding’s first ever grand prix. Vanderveen and the promising Bull Run’s Jireh flew around the course, taking tidy inside turns while leaving out strides in 40.502 seconds, which was good for second place.

Lambre has been second in three grand prix during World Equestrian Center – Ocala’s 2022 USEF Summer Series, so he was determined to take home the blue ribbon. “I really wanted this win. I knew what I had to do and All In Horses Cava is an extremely fast horse. I focused on riding every jump, but I couldn’t go too fast and risk a rail, because I have a tendency of doing that,” laughed Lambre. “He is so naturally quick I was able to gallop around the course and I even added a stride to the last jump.”

Lambre and the quick 11-year-old Oldenburg gelding soared through the timers stopping the clock at 39.337 seconds to steal the victory.

“I love competing here. The footing is the best in the U.S. and my horses always jump so well. Everything is perfect, which is why I never leave!”

An additional $5,000 was awarded to the fastest four-faulter of the $100,000 Hampton Green Farm National Grand Prix. Daniel Geitner and Oak Ledge Farm’s Fazous secured the award with a fast time of 74.846 seconds with one rail down.

Jenna Friedman received the $5,000 ‘Luck of the Draw’ award.