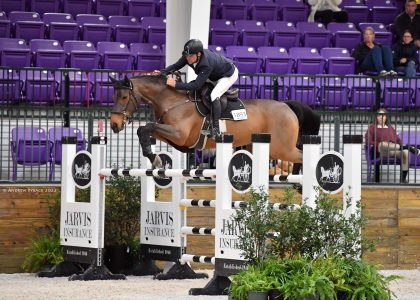 Of the 15 starters, six pairs managed to deliver a clean first round and return for the jump-off.

Always competitive, Santiago Lambre secured three of the six spots in the jump-off, leading the pack aboard his own Cetano Van Aspergem Z.

“I wanted to be tidy and quick. There were a lot of inside turns in the jump-off, and ‘Cetano’ is very careful, so I knew he would easily be able to navigate the inside turns. I think I was a little too tidy to the blue vertical, but it worked out nicely,” said Lambre.

Lambre and the speedy 13-year-old Zangershiede gelding flew through the timers in an unbeatable 38.411 seconds.

Lambre commented about today’s class, “It’s amazing to be able to show indoors during a big storm. There was no chance we could ride outside today with the strong wind and heavy rain. While we were riding in the indoors, I couldn’t even tell what was happening outside and I never had to get rained on because the barns connect to the indoor arenas,” explained Lambre. ” I think WEC could host World Cup™ competitions with classes held inside or outside. The entire facility is just unbelievable.”

Just recently, Lambre secured four grand prix wins during World Equestrian Center – Wilmington’s five-week 2022 Fall Classic Series. “The five-weeks at the Ohio location, was good practice for showing indoors. So, all of my horses were familiar with the indoor setting. They are also all coming off a two-week break, so they were all a little fresh today, but we are excited to be back and ready to show on Saturday night.”

David Cameron (AUS) and Alan 111 Z (Arko III x Vilotte) owned by Linda Huddy and Sally Watkins followed hoping to catch Lambre and Centano Van Aspergem Z’s quick time. Cameron and the 11-year-old Zangershiede gelding started on a strong gallop at the sound of the tone. The pair swiftly rolled through the first three fences to gallop to the large green vertical. Cameron and Alan 111 Z landed left to take the tight inside turn to the Coca-Cola Beverages vertical to land right to streamline to the double combination. The pair soared over the last fence in 41.088 seconds to slide into second place.

Callan Solem (USA) and Elan Farm’s Essenar Crixus (Luidam x Touch Of Dutch) were the final pair to attempt Soberon’s jump-off track. Solem and the 12-year-old Irish Sport Horse gelding rolled around the track efficiently, taking numerous inside turns to post a time of 47.019 seconds, which was good for third place.