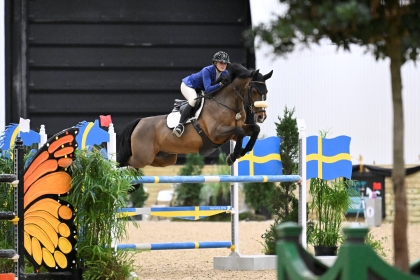 Darby Pease piloted Carel Van Donderen (Acolino 4 x Terania Dle Hoeghte) to a speedy 72.716 seconds in the qualifying round. The pair then continued straight to the jump-off of the Table II.b event, and made quick work of the winding jump-off track. Pease and the 15-year-old KWPN gelding delivered a textbook tight turn at the rollback fence and continued strong, storming through the rest of the course to stop the timers at 36.764 seconds, taking the win.

Pease shared her strategy for the class, “I went toward the beginning and had trouble on my first horse – so I wanted to have smooth second ride. Carel Van Donderen is a naturally superfast horse, so I was just going to let him gallop.” According to Pease, controlled speed and negotiating a key fence were integral to the pair’s win. “The rollback just came up for me and I wasn’t planning to make it so tight, but he was right there with me and it worked out really well.”

Pease was complimentary of Lima’s tracks. “I thought the course was really nice. I haven’t showed in a few weeks and didn’t do any warm up classes – it walked nice, nothing was too big or too scary. I thought it rode just how it walked.”

After today’s performance Pease has a plan for the weekend. “I’ll do the grand prix on Saturday night with Carel Van Donderen. He’s in top form and ready to go,” Pease added.

Pease has had the ride on Louisa Robb’s Carel Van Donderen since February. Based out of Windcrest Farm in Lexington, Kentucky, the young professional notched her first win at the grand prix level just last month during WEC Fall Classic series in Wilmington, Ohio.

Second place finisher Izzy Beisel of Goshen, Ohio, held the lead throughout the class on her own Diaz Barbotiere, until Pease bested her time. Junior rider Beisel rode the nine-year-old Selle Francais gelding to the fastest first round time of 71.264 seconds. The pair blazed around the jump-off track with an impressive time of 38.137 seconds.

The talented young riders have a friendly rivalry. “Izzy and I have gone head-to-head a lot and she’s a great competitor. I told her we’d have a rematch on Saturday.”

Nicki Wilcox and Marjorie Martin’s Hannibal W (Tornesch 1042 x Danique Du Lys) earned a spot in the jump-off with a clean first round performance in just 74.051 seconds. Parker, Colorado-based Wilcox and the 10-year-old KWPN gelding returned to log the first double-clear of the class on a time of 38.155 seconds, ultimately landing them in third place.

Watch more of the Midwest Indoors action from WEC Wilmington on our live stream via ClipMyHorse.TV