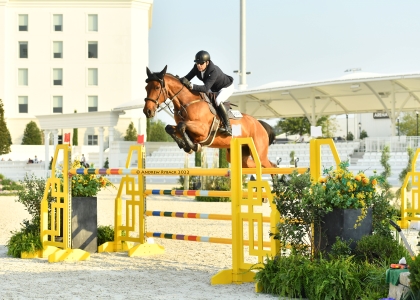 Ocala, FL – International competition kicked off early this morning in the WEC Grand Arena with the $37,000 1.45m FEI CSI3* Power & Speed class. Seventeen competitors tried their hand at Guilherme Jorge’s (BRA) power and speed course, where exhibitors were challenged to jump clear over the first seven fences and immediately continue on to the last six obstacles, regardless of whether or not faults have been incurred in the preliminary phase.

Seven different countries, including the United States, Brazil, Russia, Australia, Israel, Ireland and Argentina took to the arena with the hopes of snatching the win. Evan M. Coluccio and Hampton Green Farm LLC’s Egalini were the path finders, with a fault-free ride in 40.91 seconds, well under the time allowed of 47 seconds in the first phase. The pair galloped on to the second phase to set the pace with a time of 39.56 seconds.

Hunter Holloway (USA) and Biloba Des Chaines, an 11-year-old Selle Francais gelding by Winningmood x If De Merze owned by Sigma Stables LLC, were next in the ring, where they finished the speed portion in 39.52 seconds to ultimately earn third place.

Johan Kachelhoffer (RSA) and the 13-year-old Brandenburg gelding by Cellestial x Kolibri were the third to last pair to try and beat Lambre’s quick time but finished in 37.43 seconds to take home the red ribbon.