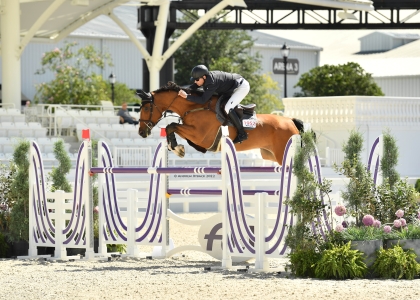 Ocala, FL – FEI CSI3* competition resumed this week at World Equestrian Center – Ocala with the $37,000 1.45m FEI CSI3* Speed. Internationally acclaimed course designer, Alan Wade (IRL) crafted the speed track that saw an even dozen gallop home fault-free. Olympian Santiago Lambre (BRA) saved the best for last as the final entry down the ramp and captured the win aboard his own Pampero, a 12-year-old Oldenburg gelding by Chacco-blue x Nekton.

Lambre was the last contender to try for the victory over Wade’s challenging track, “I was lucky to be the last one to go. With my first horse [All In Horses Cava], I was too quick, so I tried to reorganize.”

“I watched the current leader, Richard Spooner’s round and made my plan. I tried to do the same track as Richard. I did one less in the line by the hotel after I saw Kristen Vanderveen do it with both of her horses. Pampero is a pretty big horse, so he was able to get down in the five easily.”

Lambre and Pampero soared over the final FEI oxer in 60.67 seconds for the victory.

Lambre hopes to show Pampero later this week, “I will do the Welcome Prix tomorrow evening and if we are able to ride two in the Grand Prix, he will hopefully show then too.”

Richard Spooner (USA) was the eighth entry down the ramp into the WEC Grand Arena aboard his own Quirado RC, a 13-year-old Holsteiner gelding by Quinar x San Patrignano Corrado. The pair totaled a time of 62.58 seconds which put them less than two seconds behind Lambre and Pampero.

The pair proved that they were still at the top of their game as the duo put forth an effortless round in an uncatchable time of 63.93 seconds, almost three seconds faster than second place finisher, Sophia Siegel.

Siegel dashed over the track with an efficient time of 66.53 seconds aboard her own 12-year-old Zangersheide gelding by Lawito, securing the second place spot.

$37,000 1.45m FEI CSI3* winner, Santiago Lambre (BRA) sealed the third place position on the leaderboard aboard his own Chacco Blue II, a 15-year-old Oldenburg stallion out of Chacco-blue x Cincaba Rouge with a time of 67.19 seconds.