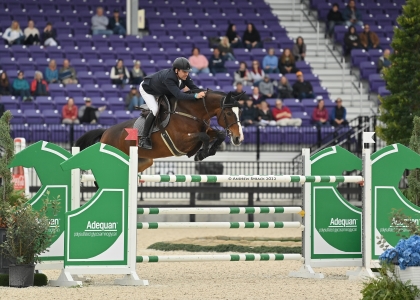 Week VI of the 2022 Winter Spectacular Show Series wrapped up with the $75,000 Adequan Grand Prix this morning in the WEC Stadium. An international field of forty-five competitors vied for the win over tracks built by FEI Level III course designer, Joey Rycroft (CAN). Sixteen entries found success over Rycroft’s first track and eleven delivered double clear rounds, but it was Santiago Lambre (BRA) and his own Comtess 202 (Comme II Faut 5 x Parodie) that flew to victory.

Lambre and Comtess 202 appeared toward the end of the order in the $75,000 Adequan Grand Prix, yielding an effortless first-round in 82.727 seconds, well under the time allowed of 88 seconds.

“The Grand Prix at night, under the lights is always a bit more challenging because of the atmosphere and the jumps are always a bit spookier at night. Comtess 202 enjoyed the change of venue for today’s class. The Stadium is a fantastic ring and it’s always good to switch things up.”

Lambre and Comtess 202 were the third to last pair to return to the jump-off, “I watched Rowan [Willis] go early on, and thought it was game over. Whenever I go in the ring, I always try my best, but I didn’t expect to win today. I think I may have had the class when I left out a stride to the last oxer. Rowan did nine there and I did eight.” The pair landed after the last fence, soaring through the timers to stop the clock in 33.314 seconds, beating Rowan Willis and Wellington Grey Goose by one tenth of a second.

Willis (AUS) and Wellington Grey Goose arrived early in the order, navigating a smooth and fast first round in 84.405 seconds. Willis and the 11-year-old Warmblood mare came back for the jump-off setting the pace early in the order with a time of 33.434 seconds, that ultimately secured second place.

Richard Spooner (USA) and Show Jumping Syndications International’s Quirado RC (Quinar x Ursula) rounded out the top three in the $75,000 Adequan Grand Prix. Spooner and the 13-year-old Holsteiner gelding navigated an effortless first round in 84.049 seconds. The pair returned to the WEC Stadium for the jump-off, flying through the course, taking tight inside turns while leaving out strides to capture a time of 33.697 seconds.

Santiago Lambre and his other mount Dingeman received the fastest four-faulter award in the $75,000 Adequan Grand Prix, delivering a time of 80.165 seconds in the first round with one down.

American Regent Animal Health, a division of American Regent, Inc., is committed to advancing animal health with proven FDA-approved products like Adequan® (polysulfated glycosaminoglycan). The company’s portfolio is anchored by the only FDA-approved polysulfated glycosaminoglycan products for horses and dogs, which have been relied on for over three decades by veterinarians. American Regent, Inc., a Daiichi Sankyo Group Company, manufactures and distributes human and veterinary pharmaceutical products and is committed to providing the ever-changing U.S. healthcare marketplace with a growing and diversified American Regent portfolio. For more information on American Regent Animal Health, visit ARAnimalHealth.com or call 800-458-0163.