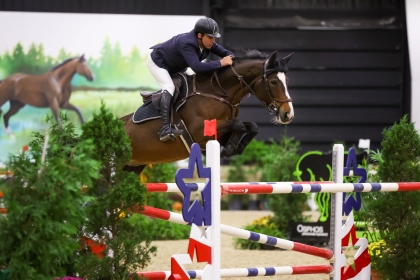 Wilmington, OH – World Equestrian Center – Wilmington hosted the first $75,000 WEC Grand Prix of the 2022 Fall Classic Show Series this evening in the Sanctuary Arena. In the opening Level 5 Jumper competition, an international field of 22 horse-and-rider combinations battled for the lion’s share of the prize money, but it was Olympian Santiago Lambre (BRA) and his longtime partner, Comtess 202 (Comme II Faut 5 x Parodie) that stole the victory by three tenths of a second.

Rob Barton (USA) built the challenging track that featured 16 jumping efforts. Of the starting 22 contenders, only six successfully answered the questions in the first round track to qualify for the jump-off.

Next in was fan favorite, Kady Abrahamson (USA) and Abrahamson Equestrian LLC’s Any (Aljano x Nina XI). Abrahamson and the 14-year-old Holsteiner mare flew around the short track, executing tight turns while soaring over each fence to stop the clock at 35.945 seconds and snag the lead. However, their time in the lead was eclipsed when Santiago Lambre entered the arena aboard Comtess 202.

Lambre knew he had to take a few risks in order to win, “Kady was two seconds faster than my time on Cetano, so I knew I was going to have to take all of the risks in order to win,” Lambre said. “I started slow in the beginning, but was tidy everywhere. Then I went as fast as I could to the last fence, and the distance was long, but Comtess kept it up.”

The pair galloped through the timers stopping the clock at an unbeatable 35.645 seconds.

Lambre and Comtess 202 are on a hot streak, “Comtess just won an FEI CSI3* three weeks ago in Mexico. I came here to prepare my horses for the World Cup™ in Lexington, Kentucky. I am currently trying to qualify for the World Cup Finals™, so we are traveling a lot, but it is always nice to come here and compete for a lot of prize money.”

Tiffany Hammack (USA) and Ghana FS Z (Glasgow W VH Merelsnest x Uschi-Vira) were the final pair to attempt to snag the time from Lambre and Comtess 202. Hammack and the nine-year-old Zangersheide mare dashed through the course in 37.128 seconds with all rails up to earn the third place spot on the leaderboard.

The $10,000 WEC Futures Prix saw a strong field of 27 horse-and-rider combinations compete for the win over Rob Barton’s challenging track. Nine competitors managed to keep all rails up and finish the track within the time allowed to qualify for the jump-off, but it was talented young rider, Izzy Beisel and her own Diaz Barbotiere that posted a time early in the order that was simply uncatchable.

Beisel and the nine-year-old Selle Francais gelding were the second pair to enter the Sanctuary Arena to try their hand at the first round track. The pair negotiated a swift first round in 75.248 seconds to qualify for the jump-off.

Beisel’s father, David Beisel gave the young athlete some helpful advice before the class, “I was talking to my dad last night on our way home and I told him I was early in the order, he said to make the rest of the class chase me, so that’s what I tried to do.”

The speedy duo went straight to the jump-off, “I ended up leaving out a stride in the one line that I wasn’t planning on doing, but he jumped in so well that the leave out was right there. Then I tried to be as quick as possible everywhere else.”

Beisel and Diaz Barbotiere flew through the timers stopping the clock at 36.635 seconds, which was more than four seconds faster than second place.

“I think that’s the fastest that we have ever gone together. He is a still a new partner for me, but we are finally getting to know each other,” told Beisel. “I also had a bit more motivation today. There was a dog adoption event in Vendor Village and there was this adorable puppy. My dad said if I got top three, I could adopt the puppy, but our good friend Taylor ended up getting him, so I am so happy to know he went to a good home.”

Third place was secured by Thursday’s Welcome Prix winner, Lisa Goldman-Smolen. Goldman-Smolen rode Brenda Perkovich’s talented six-year-old Belgian Warmblood Quinto (Vision Van’t Hazelarenhoekje x Tina) to a clean first round well under the time allowed of 84 seconds. The pair went straight to the short course, soaring to the top of the standards over each fence in 40.984 seconds.