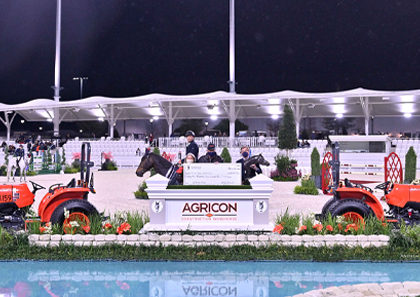 This evening’s $75,000 Agricon Kubota Superstore Grand Prix hosted 44 entries under the lights in the WEC Grand Arena. Nine countries were represented in the class with several Olympians in the order of go. Alan Wade’s course for the class featured a technical track that included a triple combination and a double combination, challenging riders throughout the course. Seven entries advanced to the jump-off, but it was Mexico’s Santiago Lambre and his own Dingeman (Nintender x Jolanels) that stole the win.

The first entry to secure a return on the short course was Aaron Vale and Sleepy P Ranch LLC’s Major (Carmargue x Pinot). Vale has notched more than 250 grand prix wins in his career and has taken several blue ribbons in grand prix classes at World Equestrian Center – Ocala this winter. Vale brought his A-game tonight, piloting his 13-year-old Danish Warmblood gelding through a clear first round in 78.145 seconds, just under the time allowed of 79 seconds.

Next to jump a clear first round were New Zealand’s Sharn Wordley and Casper (Contender x Falubet), owned by Wordley and Abrahamson Equestrian, LLC. Wordley and the 14-year-old Oldenburg gelding earned two top 10 placings in grand prix classes earlier this season, preparing them well for tonight’s 1.50m track. The Olympian guided Casper through a clear first round in 78.479 seconds, claiming a spot in the jump-off.

Last to nab a spot in the jump-off were Mexico’s Santiago Lambre and his own Dingeman (Nintender x Jolanels). The Olympian and his 13-year-old KWPN gelding have topped grand prix classes across the globe and brought their expertise to tonight’s class. The pair delivered a clear first round in 78.743 seconds, conserving plenty of energy for their return on the short course.

The course was adjusted and seven entries returned for the jump-off. The track offered few opportunities for inside turns, making for a true race for 1st place. First to return were Vale and Major. The pair set a strong pace, hugging the inside track and flying through the timers with a clear round in 37.537 seconds. Next to contest the short course were Wordley and Casper. They mirrored Vale’s tidy track, keeping their pace throughout the course and stopping the clock at 37.937 seconds with all rails up, just two-hundredths of a second behind Vale, moving into 2nd place.

Last to return in the jump-off were Lambre and Dingeman. Vale and Wordley were still atop the leaderboard, signaling that Lambre would have to give the course his all for a shot at the win. He and Dingeman picked up a gallop heading for the first fence, then kept their pace throughout the course, only slowing down to ensure tidy rollback turns. The crowd exploded as the pair raced through the timers with a clear round in 36.850 seconds, stealing the win, moving Vale and Major into 2nd place and Wordley and Casper into 3rd.

Lambre took a moment to chat with us ringside about his win, “I was lucky to be the last to go in the jump-off so that I could see how fast I needed to go. I took all of the risks from the beginning of the course because I saw that everyone was trying to be faster than Aaron Vale and most ended up one second behind. I could not just go for a clear round because there were already five clear. I know Dingeman very well, I know he can go fast and clear the jumps. He is a winner, he has won in every country in Europe.”

When asked about his plans for next week’s $200,000 Lugano Diamonds Grand Prix 1.50m at World Equestrian Center – Ocala, Lambre commented, “I think Dingeman won next week off. I have two other horses that are not showing this week that I will ride in the class next week.”

He also added, “This place is amazing, I hope to come back to show this summer.”

Thirty-one entries challenged a technical track in this morning’s $7,500 Futures Prix. Just three entries managed to jump double clear, but it was five-time Olympian Manuel Torres and Fox View Farm’s Caillou VL (Cellestial x Laudatia) that nabbed the win. Torres and the 7-year-old Oldenburg gelding earned 7th place in the $7,500 Futures Prix just two weeks ago and returned this morning in hopes of the win. The pair delivered a clear first round in 78.186 seconds, well within the time allowed of 82 seconds. They advanced straight to the jump-off, keeping a quick pace and hugging the inside track. They galloped through the timers at 42.572 seconds with all rails up, moving to the top of the leaderboard and ultimately taking 1st place.

Kama Godek and her own HRH van de Elsakker (Indoctro x Dolorus van de Elsakker) were just behind with two quick, clear rounds. Godek and the 10-year-old KWPN mare have steadily moved up in the jumper ring throughout the season, preparing them well for this morning’s 1.40m track. The pair found a clear first round in 75.848 seconds, then continued straight to the jump-off, jumping a second clear round in 42.687 seconds for 2nd place.

Rounding out the top three placings were Marcus Gruenthal and Linda Bammann’s P.S. I Love You (Perigueux x Antoinette). Gruenthal and the 11-year-old Oldenburg mare have earned several top ribbons in the $7,500 Futures Prix this season and were on form again this morning. The duo laid down a clear first round in 80.158 seconds, then delivered a second clear round in 43.831 seconds for 3rd place.

Torres took time to chat with us about his win aboard Caillou VL, “Caillou VL is a very young horse, he came from Europe at the beginning of this year as a 7-year-old. Today’s course designer, Alan Wade, is one of the toughest course designers in the world, so no matter the height of the jumps, his courses are always very difficult and technical.”

When asked about his plan on course, Torres responded, “It worked out well for me today. I knew I had to go clean and be a little fast. He’s not a slow horse, so I gave it a little bit of a shot and it worked out well and he jumped amazing. Caillou VL was doing the 7-year-olds in Europe, but with the pandemic, he hadn’t shown in a while. We brought him straight to WEC and we’ve been developing him over the past few weeks and it has gone well.”

Torres also commented on his excitement for his upcoming move to North Carolina, “I am originally from Colombia, but we have a farm in Virginia called Santa Catalina Farm. We are moving to North Carolina very soon as Manuel Torres Equestrian, and we are looking forward to that.”