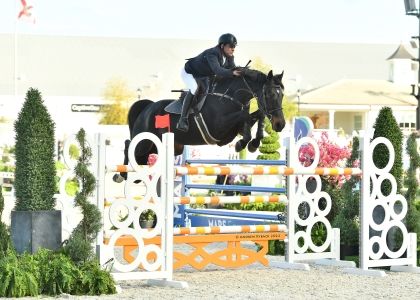 Lambre and the speedy 14-year-old KWPN gelding were the last pair down the ramp into the WEC Grand Arena to contest the $20,000 C. Jarvis Insurance Welcome Prix. The pair navigated a smooth first round leaving all rails up to stop the first-round clock at 75.818 seconds.

“Dingeman is a long-time partner of mine. He is 14-years-old now and I purchased him when he was three. So, I know him very well. He has been a super horse and has won a lot of classes throughout his career.”

Lambre and Dingeman advanced straight to the jump-off, “I was the last one in which was helpful. I was able to watch [Lauren Balcomb] jump-off so I knew I had to be fast. I just kept rolling.” Lambre and Dingeman rolled through the beginning of the winding track, leaving all rails up. The pair landed after the C. Jarvis Insurance double combination to gallop to the last oxer in nine strides, stopping the clock at 32.726 seconds, just a tenth of a second faster than second place.

Australia’s Lauren Balcomb and her own Verdini D’Houtveld Z (Verdi x Laska III) were just behind the winning pair, earning second place in today’s class. Balcomb and the super scopey 11-year-old Dutch Warmblood gelding produced a flawless and fast first round, stopping the clock at 72.939 seconds. The pair jumped-off immediately, galloping through the entire course leaving out strides while executing tidy roll backs to stop the jump-off timers at 32.802 seconds, to ultimately earn second place.

Jacqueline Ruyle of Houston, Texas and her own San Chano (Sandro Boy x Carusa) rounded out the top three in the $20,000 C. Jarvis Insurance Welcome Prix. Ruyle and the 13-year-old Oldenburg gelding delivered a fast first round in 72.722 seconds, well under the time allowed of 77 seconds. The pair advanced to the jump-off rolling through the course while jumping each fence with ease to stop the jump-off clock at 34.087 seconds.