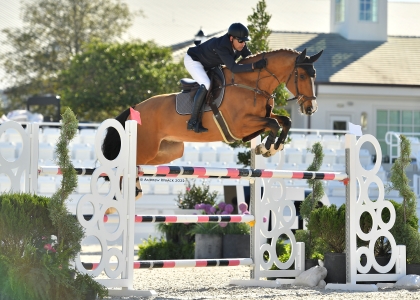 Lambre and Pampero delivered a faultless first round, jumping each fence with ease to stop the clock at 81.952 seconds, well under the time allowed of 88 seconds.

Pampero is a new partner for Lambre, “Pampero just arrived on Wednesday from Mexico. He was in quarantine for seven days in Miami and came right to WEC. I showed him on Thursday, and he was incredible. My brother rode him in three stars in Mexico, so I knew the horse and what he could do. I think I might do the Grand Prix next week with him because he was fantastic today.”

Lambre and the 12-year-old Oldenburg gelding advanced straight to the jump-off, galloping from fence one to two to take a very tight inside turn before the tree to fence three. “I knew the horse could go fast because I have seen videos of him with my brother. The track was very open after fence three, so I just stayed on a nice gallop.”

Lambre and Pampero galloped through the final timers to stop the clock at 40.190 seconds.

Richie Moloney (IRL) and Equinimity LLC’s Merqusio (P. Cicero x M. Viola) snagged the second place spot in today’s $10,000 Buckeye Nutrition Futures Prix. Moloney and the 15-year-old Belgian Warmblood gelding delivered a smooth first round in 85.711 seconds. The pair advanced to the jump-off taking tight turns while not pumping the brakes once to stop the timers at 40.562 seconds.

Megan Wexler and Golden Oaks Farm, LLC’s Cole Younger (Cayado x Stella VIII) rounded out the top three in the $10,000 Buckeye Nutrition Futures Prix. Wexler and the nine-year-old Holsteiner gelding navigated a lovely first round in 81.184 seconds. The pair jumped-off immediately, soaring through the course while leaving all rails up for a time of 41.061 seconds to earn third place.

On Friday, Foley continued his successful streak with nine-year-old KWPN mare navigating a lovely first round in 75.421 seconds. The pair advanced straight to the jump-off galloping through the winding track while taking tidy inside turns to stop the clock at 43.098 seconds to earn first. Foley and Independence LCH also earned Champion in the 1.40m Jumper division.

Penny Brennan and her own Vertigo Delorme (Chacco Blue x Faretana) were the only other pair to produce a faultless jump-off round. Brennan and the 13-year-old Westphalian stallion generated a smooth first round stopping the clock at 72.705 seconds, well within the time allowed of 80 seconds. The pair jumped-off immediately, soaring over each fence, while walking down the lines to stop the jump-off clock at 44.736 seconds.

Jenna Friedman and Lamont House LLC’s Cleiner Heiner captured the third place ribbon in Friday’s $12,500 WEC Ocala 1.40m Jumper Classic. Friedman and the ten-year-old Holsteiner gelding delivered a fast first round in 73.924 seconds. The pair advanced to the jump-off, soaring through the course to stop the clock at 44.537 seconds, with one rail down.