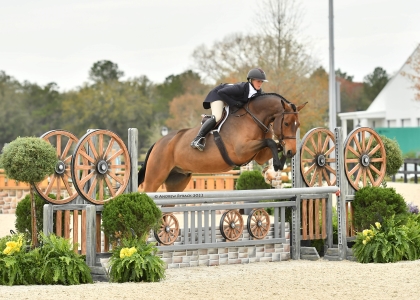 The $20,000 WEC Ocala 3’6”-3’9” Hunter Derby saw seventeen stunning hunters try their hand at Doug Russell’s winding course, but it was Samantha Schaefer and her own In The Know (Arkansas x Cavelle) that that earned the victory.

“Spyder [In The Know] is just coming back from a little break. His last show was in July, so we did two small practice classes yesterday, but today was his first day back in the derby ring and he felt fantastic,” said Schaefer.

Schaefer and In The Know were the last pair to return for the handy, “I had this really fun, crazy plan, but knowing it was his first class back and I had a decent lead I didn’t want to do anything to jeopardize that.” The pair delivered a faultless handy round, rolling through all of the turns while opting to jump the three high options to earn a score of 88, for an overall score of 179 for the win.

Brian Feigus and MTM Farm’s MTM Coco (Contendro I x T-Coriana) secured the second highest score in today’s $20,000 WEC Ocala 3’6”-3’9” Hunter Derby. Feigus and the seven-year-old Holsteiner mare produced two lovely rounds, taking the three high options during both courses to earn a first round score of 83, and a handy score of 87 for an overall score of 170.

Third place was snagged by Dorothy Douglas and Abigail Davenport’s MTM Lolah LOL (Los Angeles x Palma). Douglas and the nine-year-old Westphalian mare delivered a smooth round for a score of 78. The pair returned for the handy producing a foot-perfect round for the class’s highest handy score of 90 and a two-round total of 168.

Twenty-nine stunning hunters took to Hunter 1 early this morning to vie for the win over a winding track designed by Doug Russell. Scores soared into the 90s but it was Dorothy Douglas and Abigail Davenport’s MTM Exceptional (Casall Ask x Rheinsberg) that caught the judges eye.

Douglas and MTM Expectional have earned second place during the first three weeks of the Ocala Winter Spectacular Show Series in the 3’ Open Hunter Derby. Today, Douglas and the sporty 13-year-old Holsteiner gelding navigated a gorgeous first round, jumping each fence in perfect form for a score of 90.

Douglas and MTM Exceptional have been a pair for quite some time, “He is the longest partnership that I have ever had. His owners purchased him when he was still a stallion in Europe. I am so thankful that we took the win today because for the past few weeks I’ve been the bridesmaid.”

Douglas and MTM Exceptional returned for the handy, delivering a seamless round, while jumping all three high options to earn the class’s highest handy score of 91 for a two round total of 181. “Moose [MTM Exceptional] was amazing during the handy. The best part was the trot fence. He landed after the high option and saw his mom at the gate with cookies and came right down to a trot, jumped the log perfectly and streamlined right to her.”

Amanda Steege and Taylor Mitchell’s Carero (Cabardino x Rio’s Lavita W) captured second place honors in today’s $15,000 WEC Ocala 3’ Open Hunter Derby. Steege and the 12-year-old Hanoverian gelding delivered a smooth first round, jumping all three high options to earn a score of 87. The pair returned to contest the handy, delivering a lovely round while opting to jump the three high options, earning a score of 90 for a two-round total of 177.

Hillary Johnson and Copper Fox LLC’s Moonwalk (Quasimodo Z x Olavsca-F) rounded out the top three in the $15,000 WEC Ocala 3’ Open Hunter Derby. Johnson and 15-year-old KWPN gelding jumped all three high options in the first round to earn a score of 83. The pair returned for the handy delivering a gorgeous round for a score of 86, for a total of 169.

The $15,000 WEC Ocala 3’ Jr/Am Hunter Derby saw 23 horse-and-rider combinations compete for the top prize, but it was Molly Braswell and her own Jalisco that earned the highest overall score of 176 for the hunter derby win.

Braswell and the adorable eight-year-old gelding by El Savador produced a gorgeous first round jumping all three high options to earn a score of 87. Braswell just purchased Jalisco, “We just got him back in November from Belgium. He is so easy, doesn’t jump too hard and he never spooks.”

Braswell and Jalisco returned to contest the handy course, flowing seamless through the turns jumping all three high options to earn a score of 89, for an overall score of 176. “My plan was to just have a nice round. This was his first handy ever, so I wanted to give him a good ride.”

Katalina Prusso and Judy Kerr’s Camelot captured the second place finish in the Jr/Am Hunter Derby. Prusso and the 13-year-old warmblood gelding produced a lovely first round for a score of 85. The pair returned for the handy jumping all three high options for a score of 86, for a total of 171.

Sara Setian and her own PS Copy That (Colman x Lavinja) rounded out the top three in the $15,000 WEC Ocala 3’ Jr/Am Hunter Derby. Setian and the eight-year-old Oldenburg gelding delivered two gorgeous rounds earning a first round score of 81, and a handy score of 85 for a two-round total of 166.

Before the start of the handy round in the $15,000 WEC Ocala 3′ Open Hunter Derby, the prestigious Style of Riding Award was presented to Jenny Miller for her classic style and her sportsmanship. The Style of Riding Award is generously presented by Bill Rube to be awarded to the rider who best displays the American Style of riding in the ring and sportsmanship outside of the competition arena. The recipient serves as a role model for preserving the integrity and tradition of equestrian sport. “This award is very special to me because the recipient of this award pays it forward both in and out of the show ring,” says Rube. Miller received an elegant duffel bag and wore a pink rose corsage on her lapel throughout the handy round to signify her achievement.