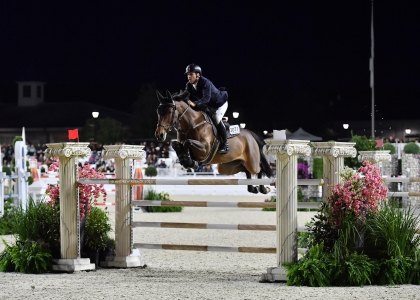 Ocala, FL – It was a full house at World Equestrian Center – Ocala tonight as spectators gathered to enjoy the first grand prix of the 12-week 2023 Winter Spectacular Show Series. The $100,000 Coors Light Grand Prix saw 31 of the world’s best show jumping athletes from seven countries seize the opportunity to challenge the intricate tracks built by FEI Level II course designer Tucker Williams (USA) with assistance from Bobby Murphy (USA) and Pat Muskus (USA). All eyes were on Olympian Santiago Lambre (BRA) as he piloted his own The Diamant Rose Z (Toulon x Diamant Z) to a dramatic win.

An even 14 entries of the starting 31 qualified to return to the jump-off where Lambre held four of the 14 clean finishes. Half of the returning entries managed to deliver a double clear effort.

Aaron Vale and Elusive (Rodrigoo x Alouette) were the first pair to return to the jump-off setting the pace at 37.055 seconds for the remainder of the class. Kristen Vanderveen and Bull Run Jumpers Inc.’s Bull Run’s Risen (Utopie x Violette) were quick to up the ante right after Vale, posting a time of 36.707 seconds.

Tracy Fenney (USA) and fan favorite MTM Apple (Favorit Ask x Kong’s Whopsie) were the next pair in to attempt to find the golden path. Fenney and the 12-year-old Danish Warmblood mare threw down the gauntlet, with a blistering 36.187 second finish.

Fenney held onto that lead until Santiago Lambre entered the arena aboard The Diamant Rose Z. “I had quite a few horses in the jump-off, so I tried to go as fast as I could on my first one, to see where I could be better on my next,” state Lambre. “On my first horse I tried to do the eight to the last line like Kristen on ‘Risen’ but, my horse wasn’t able to get there so I had a rail.”

“When I returned on Casey, I was quick, but I wasn’t as fast as Tracy, so I knew I had to give it my all on The Diamant Rose Z,” expressed Lambre. “’Diamant’ is a very fast horse with a lot of blood, so I knew I just had to keep going and not pull.”

Lambre and the 12-year-old Zangersheide mare found fence one on a nice angle, “I tried to be as direct as I could from one to two, so we could land right and gallop to the red oxer. Then, we did eight back to the double combination and found the pink oxer on a forward gallop. Then we galloped down to the final oxer in nine strides.”

Lambre and The Diamant Rose Z flew through the finish stopping the clock at an uncatchable 35.430 seconds.

Lambre spoke about tonight’s class, “I was shocked that so many riders went clear. It was big enough and it was challenging enough, but the horses just thrive here. They always jump so well under this atmosphere. The jumps are gorgeous, the footing is perfect, and the crowd is electric. If you can jump here, you can jump at the Olympics. The jump-offs are always so fast, and the competition is so strong. This is the best venue to prepare for any competition.”

Aaron Vale and Lori Osterstock’s I Adermie R 4 (Den Ham Blue R x W.Adermie 1) were the final combination to try and best Lambre’s leading time. Vale and the ten-year-old Dutch Warmblood mare gave the track all that they had to stop the clock at 35.978 seconds, just five tenths of a second behind Lambre and The Diamant Rose Z.

An additional $5,000 was awarded to the fastest four-faulter of the $100,000 Coors Light Grand Prix. Rowan Willis (AUS) and Wellington Grey Goose received the award with an incredibly fast time of 71.724 seconds with one down.