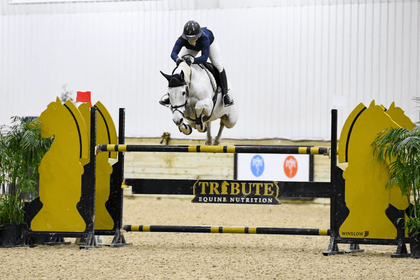 Wilmington, Ohio – The spotlight shifted to jumper athletes Saturday, January 7 during Winter Classic #4 at World Equestrian Center – Wilmington’s Winter in the Midwest indoor circuit. The state-of-the-art facility played host to an impressive group of horse-and-athlete combinations for the highly anticipated $30,000 Tribute Grand Prix. Fourteen partnerships put their best foot forward in the Sanctuary though none could touch Genevieve Munson (USA) as she earned the blue ribbon on Charlene (Clarimo x Raja II) and second place aboard Contendro Star (Contendro I x Gloria).

Anderson Lima (BRA) set a towering track for the field of scopey horses. A triple combination, a one-stride quick out of the turn, and a delicate liverpool at the end of the arena asked technical questions of the athletes and their abilities. Lima’s track was full of great difficulty, though Munson saw no challenge in the task at hand, besting the field of professionals in great style and speed aboard both of her entered mounts.

Of the seven horses to return for the jump-off, Munson of Rogers, Arkansas, returned first to go on her very own Contendro Star. The 15-year-old Hanoverian gelding impressed the crowd with his unmatched scope, making great efforts through the combinations and taking precious strides out in the lines during the jump-off phase. Landing through the timers in 33.419 seconds, the duo held the lead until Munson bested her own time aboard her second and final mount of the class.

Munson shared on her two differing plans for the jump-off phase, “The plan definitely differed between horses. They are both very quick, but in totally different ways. Nigel [Contendro Star] has the gift of a large stride, so the turns are a lot harder for him. This jump-off played to his strengths because it was a long line and then a flat turn to another long line. I was able to do six strides which was a double leave out compared to what the other horses did.”

“The mare [Charlene] gets flat whenever she gets too stretched out and will have rails down. Her gift is how quick and handy she is, so it did not play to her strengths as much. I asked a lot of her today, but she gave me all that she had. She was incredible.”

As the final entry to return, already sitting on top, Munson looked to sweep the class with a first and second place. Picking up an immediate gallop to jump one, the 15-year-old Holsteiner mare made turns untried by the rest of the field to leave out one stride to the final fence. Munson and Charlene galloped through the timers in 32.935 seconds to take the win.

The young professional continues to grow her already successful record with her string of horses at Rogers Equestrian Center in Rogers, Arkansas, and Ecurie De Cuite Feve in Rosieres-Aux-Salines, Lorraine, France.

Rounding out the podium was Paul Halpern (CAN) and Vanessa Lee’s Esra (Bratt Z x Ulibra). Coming off a second-place finish in Thursday evening’s $10,000 WEC Welcome Stake, the duo was in top form looking to bring home another podium finish. The 11-year-old Holsteiner mare did not miss a beat and jumped every fence in picturesque form. Halpern of Ecuries Nova Stables in Montreal, Quebec, guided the mare to two consistent and effortless clear rounds. Crossing through the timers in 34.071, the duo was awarded third-place honors.

WEC – Wilmington sponsor Vitalize presented the Blazin’ Fastest Four Faulter $1,000 bonus in the $30,000 WEC Grand Prix to Liz Hutchison and Balugata, who earned 74.664 seconds in the first round, finishing tenth in the class overall.

Kyle Perkovich and Bengtsson Race to the Win in the $10,000 Futures Prix at WEC Winter Classic #4

Fourteen promising combinations kicked off feature competition Saturday earlier in the afternoon in the $10,000 Futures Prix. The field of athletes saw a variety of developing partnerships as well as many young horses. Despite only being partnered for one week, Kyle Perkovich (USA) and Bengtsson (Buballu VDL x Uzmakieka VDL) demonstrated experience beyond their time together, taking an impressive lead in the $10,000 Futures Prix.

“I started riding Benji [Bengtsson] about a week ago. It was a spur of the moment decision to bring him up here to Ohio, so it really awesome to win such a big class with him! We always have a great time when we come to WEC – Wilmington. I have been coming here since I was 15 and I am 21 now, so we have been showing here a long time now,” commented Perkovich.

Perkovich, training out of Red Coat Farm in Long Grove, Illinois, piloted Lisa Goldman-Smolen’s 11-year-old KWPN gelding to a quick first round effort to qualify for the immediate jump-off. The duo, looking to best Izzy Beisel’s leading time, stuck to their plan that would ensure a clear and fast effort to take the lead.

Perkovich shared on his jump-off plan, “I wanted to get a really good canter to the first fence. I had my path in mind to get to the second oxer. I t was a skinnier oxer, so I wanted to make a tighter turn to that and stay out and jump the vertical to shape up the seven and stay on that quick step. He is a short strided horse, but he squared up well and jumped across the vertical well where most people were having trouble. I wasn’t sure if I was going to do six or seven in the last line, but he was on it so we did six!”

Galloping through the timers in 36.659 seconds, Perkovich and Bengtsson added a win to their record at their first horse show together.

Beisel guided her very own Diaz Barbotiere to an early lead in the class. The 10-year-old Selle Francias gelding made impressively careful efforts over each obstacle, jumping in tight, proper form. The duo held the lead with a blazing fast time of 33.005 seconds until they were ultimately bested by Perkovich, securing the red ribbon.

Third place honors were award to Beisel aboard her second mount, Vegas H. The 10-year-old Hanoverian gelding owned by her father and trainer, David Beisel, posted two effortless clear rounds. An extra stride in the first inside turn of the jump off put them just behind the top two spots. Beisel rounded out the podium with a jump-off time of 34.183 seconds.