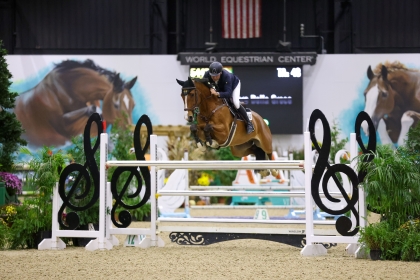 Wade’s challenging track consisted of 15 jumping efforts that included three formidable double combinations that caught numerous pairs throughout the class. Seven of the field managed to deliver a clean first round to qualify for the jump-off and ultimately five were able to navigate double clean efforts.

Sabine Cooper (USA) and her own Nazarine Vd Axelhoeve (Emerald Van’t Ruytershof x Camara Z) were the first pair to return to the jump-off. Copper and the nine-year-old Belgian Warmblood mare laid down a swift jump-off effort, rolling around the track to stop the clock at 41.878 seconds.

Lisa Goldman-Smolen (USA) and Sovereign were the next pair in to attempt to snatch the lead. The pair raced around the track but fell victim to two unfortunate rails. Simon McCarthy (IRL) was in next aboard Pine Hallow Farm’s Don’t Touch Du Bois. The pair galloped around the course, but had one rail along the way in 37.865 seconds.

Santiago Lambre and his own Pampero were next in to attempt a clear round over Wade’s winding tracks. Lambre and the 12-year-old Oldenburg gelding kicked off on an immediate gallop after the tone, “There were a perfect number of clears in the first round, which led to a competitive jump-off. I was fifth to go, but I knew that the two clears were not so fast,” said Lambre.

“I wanted to be fast, but not go too quick to risk a rail. So, I stayed as tidy as I could in all the turns and Pampero is naturally quick off that ground, so that worked to my advantage.”

The pair flew around the course finding the last large oxer right out of stride in 38.388 seconds to seal an unbeatable time.

Lambre commended Wade for his tracks, “Alan Wade always does a fantastic job. He set a course for 27 competitive riders, and he had the perfect number in the jump-off. The jumps were big, but it was technical enough to have rails down throughout the track.”

“This has been the perfect venue to prepare my horses for the National Horse Show in Kentucky. I think that this facility holds incredible shows. The jumps and the atmosphere are always welcoming.” Lambre expressed. “We will stay here for the final week of the series, then I will go to the World Cup™ in Kentucky. After that the horses will get a two-week break, then will be in Ocala for the WEC – Ocala Fall and Winter circuit shows.”

The Vitalize® Blazin’ Fastest Four-Faulter Award was secured by Mattias Ekeroth and his own Haydee M.

A strong field of 33 horse-and-rider combinations took to the Sanctuary Arena to compete over FEI Level IV course designer, Alan Wade’s (IRL) first round track in the $10,000 WEC Futures Prix. The first round course proved to be a challenge for all but six combinations. In the jump-off an even two were able to deliver another clean effort, but it was Katia Manuel-Adams and Joan Van Gorkum’s Active X Van Www.Olland.Biz Z (Allegro x T’ogla) that found the fastest track to take home the victory.

Izzy Beisel (USA) and David Beisel’s Vegas H (Valentino x Cobrah) were the first pair to attempt the jump-off after securing a clean first round in 71.847 seconds. Beisel and nine-year-old Hanoverian stallion went straight to the jump-off soaring around the track in an incredibly fast time of 35.674 seconds, but had an unfortunate rail, to ultimately earn third place.

Alexis Bodo (USA) followed shortly after aboard her own Colton Playtime (Dokkum De Rialfo x Colton Maelstrom). Bodo and the 12-year-old Warmblood gelding navigated a clear round in an efficient 68.764 seconds. The pair advanced to the jump-off, rolling around the track, keeping all rails up in 38.686 seconds, securing the first double clean ride of the afternoon.

Manuel-Adams commented on today’s challenging track, “It was a pretty tough course. I love Alan Wade. I think he is one of the best designers in the world. He makes the tracks complex that leads to rider mistakes throughout the course.”

Manuel-Adams and Active X Van Www.Olland.Biz Z went straight to the jump-off with the hopes of solidifying a clean round, “Active has a large step, so I left out a stride in the last two lines. I used his efficiency across the ground and over the jumps throughout the rest of the course.”

The pair flew swiftly across the finish to post a time of 37.505 seconds for the win.

Manuel-Adams was very happy with Active’s performance today, “He felt fantastic today. I feel like we are getting to know each other better and better with each competition.” Manuel-Adams said. “This will be our last show of the season. All the horses will enjoy a nice break, then we will head down to show at WEC – Ocala in the winter. The plan is to step Active up and do the Saturday night classes under the lights in the Grand Arena.”