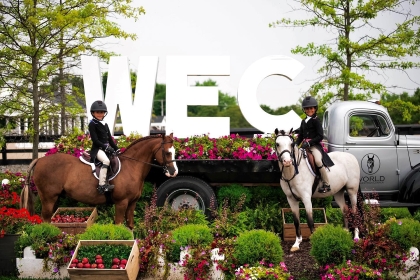 Wilmington, OH – This week’s Wilmington Sunday Spotlight shines on ten-year-old Sienna Rossano and eight-year-old Lucca Rossano. These two sisters are dominating the pony divisions with their string of small and medium ponies. We caught up with the two sisters to learn more about their ponies.

WEC: Tell us a bit about you and your riding!

My name is Sienna. I am ten years old, and I am in fifth grade. I ride a bunch of ponies in the hunters and have one horse that does the jumpers.

WEC: Can you tell us a bit more about the ponies and horse you ride?

Crush, [DF Crush] is a small chestnut pony that has a big blaze and a sock. I have had him for two years. I love him because he loves me back and he doesn’t like other people how he loves me. He follows me around like a puppy and he’s always happy to see me.

Astro Boy is a perfect white pony. He’s hard to keep clean, but I love him anyway.

Styles, [As It Was] is another medium pony I ride. He has a star. We just got him, and I already love him.

Harlow, [Harlow Gold] is my palomino small pony. My first pony ever was a palomino pony, so he’s a special pony for me because he reminds me of my other pony.

High Tops is my medium pony with a lot of white. We call him Cosmo and he’s a lot of fun to ride.

Romeo, [Sir Lukas] is a small pony. He is a dark bay with a white face. I have a lot of fun jumping him around.

Iris, is a jumper. She’s big! I do the .80m jumpers on her. She’s the fastest horse ever and I like doing all the turns.

WEC: Do you have any other hobbies?

I like playing soccer and hanging out with my friends.

Literature! I love reading books, my favorite book is The Lion, the Witch, and the Wardrobe.

WEC: What do you want to be when you grow up?

I want to be an Olympian!

WEC: Tell us bout you and your riding!

I am eight-years-old and I am in third grade. I ride in the pony hunters and do the pony derbies.

Oompa Loompa is my strawberry roan pony. He was my first pony ever and he has taught me a lot. I am very brave because he taught me how to be. He loves apples and always asks for treats. I rode him at Pony Finals and got a ribbon!

Huck [Fallingmoon Huckleberry] is my chestnut pony. He has a bunch of white on his body. He has a big blaze and four socks. I show him in the derbies where I get to wear my shadbelly. I really like the trot fences in the derbies, they are always fun to jump.

Huck is a very lazy pony, so he taught me to keep squeezing all the time.

Gogo, [Dressed To Go] is a dark bay small pony. He’s perfect and incredible. He is super comfy and has a big stride, so I don’t have to kick to get down the lines. He can’t have a lot of sugar, so we give him special treats that we call ‘Go Go treats’. They smell like apples. I love him so much. He is one of my favorites.

Chi Chi, [Keep it Simple] is my other pony. My sister also showed Chi Chi. We both love him a lot.

Astronomy! I like going outside to see all the stars.

WEC: What do you want to be when you grow up?

After the interview with the girls, we caught up with their mom, Jennifer and their trainer Stephen Long.

WEC: How did the girls get into the sport?

Jennifer Rossano: When I was young, my dad was a trainer and owner of racing Standard Breds. I did one leadline class when I was young, but that was a about it, but I grew up around horses. When Sienna turned five years old, she wanted to learn how to ride. She began taking lessons with Madeline Meyers and Stephen Long at Right Lane Farm.

She was also doing cheerleading, but when she had the option to either get a pony or continue cheerleading, she chose the pony. After that, there was no going back. We purchased Star who was a little adorable palomino pony, and I had a palomino pony growing up, so it was meant to be.

Lucca, Sienna’s younger sister would come to watch her lessons and she always wanted to help groom the ponies and graze them after. When she was old enough to ride, it was perfect timing, because Sienna was growing out of Star. After that they would trade up ponies. Lucca started to get her own style and get her own ponies. Now, they compete together in the same classes, but they always play well together.

I can’t thank Stephen Long, Madeline Meyers and Clara Cheska enough. Stephen is our barn manager. He does the lessons and schedule. Madeline Meyer is the girls head trainer but, we are going to be traveling to Wellington this Winter where the girls will work with Cara Cheska. I am so happy to have such an amazing group helping myself and my girls.

WEC: Tell us about Sienna and Lucca.

Stephen Long: They are amazing little riders. Right before Lucca started to become serious with riding, I became a professional. I started Lucca in leadline and now she’s doing all the pony hunter divisions. It’s been so much fun to watch both of the girls grow. They are the easiest kids I’ve ever taught, they come in and remember what they learned yesterday.

Even though they are sisters, they are very different. Sienna is very serious and concentrated at the ring, but Lucca is a total jokester. She cracks jokes while we are going over the courses, while Sienna is super serious.

They compete together well, and they tell are always up for some friendly competition.

Thank you, Sienna and Lucca, for chatting with us! We wish you all the best with your ponies!