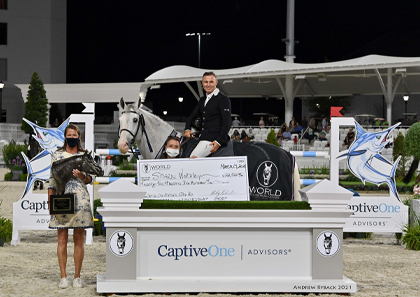 Thirty entries took to the WEC Grand Arena under the lights for this evening’s $75,000 CaptiveOne Advisors Grand Prix. The class saw fierce competition with 13 entries advancing to the jump-off and six jumping double clear, but it was Sharn Wordley and his own Gatsby (Simba x Daisy Cruise) that stole the win.

Nine countries were represented in tonight’s class with several Olympians vying for the win. One of the first entries to deliver a clear first round was Mexico’s Santiago Lambre aboard his own Comtess. Lambre and the scopey mare topped last week’s $75,000 Grand Prix sponsored by Golden Ocala Golf & Equestrian Club and were searching for another chance at the win. The pair easily found a clear first round in 69.175 seconds, well under the time allowed of 74 seconds, ensuring a return on the short course.

Lambre also secured a spot in the jump-off aboard his own Easy Girl (Conthargos x Nanina). Lambre and the 10-year-old mare earned 2nd place in last week’s $75,000 Grand Prix sponsored by Golden Ocala Golf & Equestrian Club and were on form again tonight. The duo was quick and clear in the first round in a time of 70.461 seconds.

New Zealand’s Sharn Wordley and his own Gatsby (Simba x Daisy Cruise) also laid down a clear first round near the end of the order. Wordley and the 16-year-old Irish Spot Horse stallion nabbed 2nd place in Week 7’s $75,000 WEC Grand Prix and returned tonight in hopes of another top finish. The pair laid down one of the fastest clear first rounds of the class in 68.703 seconds, signaling that they would be strong competitors in the jump-off.

The course was adjusted and 13 entries returned for the jump-off. Lambre and Comtess took to the course near the top of the order, heading to the first fence with a strong gallop. The duo held their pace throughout the course, taking a tidy rollback turn to fence 8 and the inside track to the final fence. They stopped the clock with all rails up at 42.802 seconds, setting the time to beat.

Lambre returned later in the order aboard Easy Girl, still holding the lead with Comtess. Though he already sat atop the leaderboard with one of his four mounts in the jump-off, Lambre urged Easy Girl forward, chasing his own time. He mirrored his previous track with a snug rollback and inside turn, and the pair raced through the timers at 43.275 seconds, moving into 2nd place.

We caught up with Wordley after the class to chat about his win, “Santiago had five in the class and four in the jump-off, and he’s always really hard to beat. In the jump-off, my plan was to go just a little bit faster than Santiago. There weren’t too many options on course; there was one option to leave a stride out, but only a couple of people did it and Santiago didn’t do it, so I chose not to. I went a little bit faster in the combination, then was a little bit slower to the last jump, so that’s why the time was so close. Gatsby is quick in the air, he just skims over the jump, so that always helps.”

When asked about his plans for the remainder of the season, Wordley replied, “I didn’t show last week, but Gatsby was 2nd just before that. I am planning to stay here here for the remaining weeks and we’ll do the $200,000 Grand Prix during Week 12.”

Wordley added, “I love this place. I love the management, I love the classes, I love the crowd, I love everything. I’ve show jumped in 36 countries around the world and this is by far the best place that I’ve been to. It’s so nice to have it on my doorstep, too.”

Two entries jumped double clear before David Beisel and Equine Holdings LLC’s Ivana Jump (Lupicor x Donnaludine) entered the ring, so Beisel knew he would have to bring his A-game for a shot at the win. Beisel and the 7-year-old Dutch Warmblood mare have worked their way up in height throughout the World Equestrian Center – Ocala Winter Spectacular and were ready to take on this morning’s 1.40m class. The pair laid down a quick first round with all rails up in 79.301 seconds before continuing straight to the jump-off. They upped the ante in the class, galloping to each fence and blazing through the timers in 31.772 seconds, moving into the lead.

Next in the ring were Izzy Beisel and David Beisel’s Ammeretto (Numero Uno x Ranna). Izzy Beisel and the 15-year-old Dutch Warmblood stallion took the top spot in last week’s $7,500 Futures Prix and returned this morning on the hunt for another win. The duo flew through the first round in 78.735 seconds, jumping clear and advancing straight to the jump-off. Though she knew her father’s time would be tough to beat, Beisel was determined to try, and she urged Ammeretto forward throughout the course. The crowd urged Beisel to kick on as she turned for the final fence, and the stands erupted in applause as she crossed the timers at 30.590 seconds with all rails up, a full second ahead of her father for 1st place.

Izzy Beisel took a moment to chat with us ringside after the class, “I went right after my dad, who went double clear in 31 seconds. I passed him going into the ring and told him that I could do it in 29 seconds, and we ended up doing the jump-off in 30 seconds. It was really fun, Ammeretto is such a fun horse and he knows what he’s doing. Our warm up yesterday was a crossrail and a low vertical, so it was cool that he stepped right in today.”

David Beisel also commented on Izzy Beisel’s win, “Izzy’s win was pretty special, it was great getting beat by my own daughter! This is the first time we’ve gone 1-2 in a big class, but hopefully it’s the first of many. I’d also like to thank Mr. Neilson and Equine Holdings for allowing me to ride Ivana Jump, she was fantastic in today’s class.”