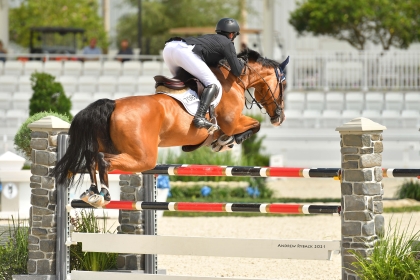 Bilbao and Tinker Bell by Chacco Blue are on a roll this week, with a previous win in Thursday’s $15,000 WEC Ocala Welcome Prix. The pair also earned third place in last week’s $15,000 WEC Ocala 1.40m Jumper Classic. Diego Bilbao is very proud of the fast mare, “She is an amazing horse. She clears every fence so easily and she is so quick off the ground, I really enjoy riding her.”

Bilbao and the 11-year-old Warmblood Mare produced a very fast, clean first round, stopping the clock at 79.037 seconds, way under the time allowed of 87 seconds. Tinker Bell and Bilbao advanced straight to the jump-off, galloping from fence one to two in seven strides for a tidy roll back to fence three. The pair raced to the CaptiveOne Advisors double combination, leaving all rails up. Bilbao and Tinker Bell took a very tight inside turn to the large yellow oxer, “The inside turn to the yellow, was there exactly how I planned. I got to the fence on a little bit of an angle and a tad deep, but she just explodes over the fences,” expressed Bilbao. The duo galloped to the last fence, to stop the clock at 34.243 seconds to earn the class win.

Bilbao praises Tinker Bell for her carefulness and willingness, “She wants to jump every fence like it’s the last. I try not to get in her way because she is ready to win each time she steps into the ring.”

Just behind Bilbao and Tinker Bell was Australia’s Rowan Willis and Molly Kenney’s Fashion Prince. Willis earned second and third place in last night’s $75,000 CaptiveOne Grand Prix. Willis and 11-year-old Hanoverian gelding produced a flawless first round, soaring to the top of the standards to stop the timers at 82.833 seconds. The pair jumped-off immediately, galloping from fence one to two in six strides, to roll through the rest of the course to stop the clock at 34.753 seconds, just behind Bilbao and Tinker Bell.

Congratulations to all entries on another fantastic week of equestrian sport!