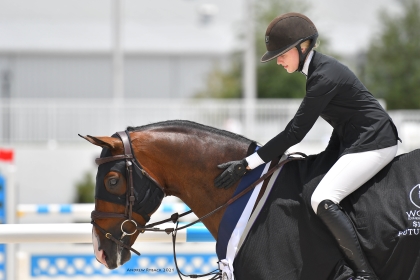 Vale and Major were the last double clear pair to enter the jump-off. Vale and the 13-year-old Danish Warmblood gelding delivered a fast and smooth first round in 79.505 seconds, well under the time allowed of 83 seconds. “Major is an amazing horse. He is fast off the ground and over the fence,” said Vale.

Vale was in it for the win, “I really took a flyer at three, where I made up a good amount of time. Even off that speed Major was still able to make a good turn back to the next jump. Then the combination came up on a nice gallop, where I could go inside [the gazebo] to the big oxer. I ended up catching the oxer going forward, so I had a ton of momentum going to the last fence. As I was galloping to the last fence, I had a pretty good idea that I had the class, so I had the option to slow down but I didn’t want to take him out of his rhythm. I figured I was just as likely to have the last fence down if I were to put another step in, so I just kept going and he kept it up.”

Vale and Major flew through the timers stopping the clock at 38.692 seconds, more than two seconds faster than second place finishers, Rowan Willis and Blue Movie.

An additional $5,000 was awarded to Callen Solem and Essenar Crixus, the fastest four-faulters of Saturday night’s $75,000 CaptiveOne Advisors Grand Prix. The pair rolled through the first-round course with just one fence down, to stop the clock at 78.660 seconds, earning the pair the $5,000 prize. The non-award winning entry that received the Luck of the Draw $5,000 prize was Holly Shepherd and CHS Krooze.

Fifteen-year-old McCutcheon set the pace early with her first mount MTM Fortunate, stopping the jump-off clock at 30.817 seconds to ultimately end up fourth. McCutcheon returned with her second mount MTM Unexpected, producing a flawless first round, jumping each fence with ease, to stop the clock at 76.602 seconds. McCutcheon and MTM Unexpected (Sir Shutterfly x Innovation) started the jump off strong, cruising from fence one to fence two in a tidy roll back. The pair galloped to the double combination, leaving both fences up. McCutcheon and MTM Unexpected flew to the large pink oxer, to roll through the last line in seven strides to stop the clock at 30.234 seconds, earning the win.

Hunter Derby Friday took over the CaptiveOne Advisors Indoor Arena as 33 entries contested the $12,500 WEC Ocala 3’6”-3’9” Hunter Derby and the $10,000 WEC Ocala 3’ Hunter Derby. FEI Level III and USEF “R” rated hunter course designer, Peter Grant, designed the technical tracks for the day. The courses featured a myriad of natural fences with three high options and an inviting hay bale fence. Competition was intense in both derbies with scores soaring high into the 80s, but it was Jennifer Bliss of Loxahatchee, Florida that captured the win in both classes.

Jennifer Bliss and Harris Hill Farm, LLC’s Poker Face laid down a foot-perfect first round, only taking one high option to earn a score of 88. Bliss and Poker Face (Tangelo Van De Zuutheve x  Nicolette V) returned for the handy course, taking tight inside turns after fence one, fence two, and fence three. The pair rolled through the rest of the course flawlessly, taking zero high options but still earning a high score of 88 for a two-round total of 176, to take home first place.

Earlier Friday morning, 21 entries took to the CaptiveOne Advisors Indoor Arena to contest the $10,000 WEC Ocala 3’ Hunter Derby, but it was Jennifer Bliss who captured the class, once again earning the first-place prize. Bliss and Sugarman started the class off strong, taking all three high options in the first-round to earn the highest-class score of 89. The pair came back for the handy, taking short inside turns with two high options, to earn a score of 83.75, for a total score of 172.75, earning Bliss her second hunter derby win.

Thursday morning kicked off feature class action for Week V of the World Equestrian Center – Ocala Summer Series with 54 horse-and-rider combinations vying for the win in the $15,000 WEC Ocala Welcome Prix, but it was Diego Bilbao and Tinker Bell who ultimately earned the class win. Spain’s Diego Bilbao and his new mount Tinker Bell set the pace for the rest of the class, producing double clear rounds toward the end of the order. The duo jumped a clean, fast first round in 71.740 seconds, well under the time allowed of 77 seconds. Bilbao and Tinker Bell advanced straight to the jump-off, choosing to do eight strides to the double combination, which was one more that other riders. Even with the added stride, Bilbao and Tinker bell were able to stop the clock at 34.624 seconds to earn the win.

Virginia Connors and her own Karma took home the blue ribbon in the $7,500 Non Pro 2’6” Hunter Derby. Connors and the 15-year-old Oldenburg mare just started to dabble in the hunters after years of doing the jumpers. Connors is very excited about their new hunter career.

Congratulations to all entries on another amazing week of equestrian sport at World Equestrian Center – Ocala!