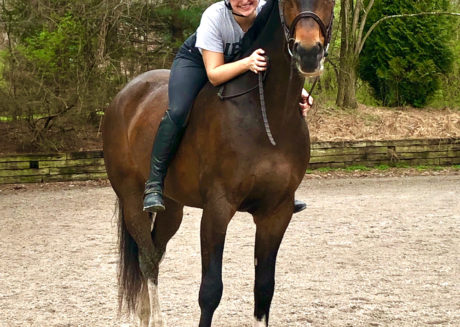 This week’s Sunday Spotlight lands on amateur Emily Kowalchik. Emily celebrated her 29th birthday on Friday and is looking forward to a year filled with quality time with her new horse, Grant. She took the time this week to chat with us about Grant, her freshly-found goals and her budding career in marketing and real estate.

Emily: I am the middle child of three sisters. We lived in Maryland when we were young, and my older sister was an animal lover. We started riding and it all snowballed from there. Before we knew it, we were all three very involved in horses. Much to my parents’ dismay, we never grew out of it. I started riding when I was around seven years old. By the time we moved to Ohio, we were all very into riding and we had bought a horse. There’s not really been a time in my life that I can remember that I haven’t been riding or had horses as part of my life.

WEC: Do your sisters still ride with you?

Emily: My older sister lives in Nashville, and she’s ridden off and on since she moved there. She has two kids under two years old, so she’s kind of busy with mom life. She does ride when she comes home, though. My family has a horse that we bred from my Children’s Hunter. My older sister loves him, so every time that she comes home she wants to ride him.

My little sister, Mollie, rode all throughout college. She mainly rides our baby horse now. There’s always been at least one of us at any point in time over the past 20 years who has been involved in horses. Most of the time, it was at least two of us.

Emily: I just became a horse owner again for the first time in about 10 years. I bought a horse in January, though I wasn’t really looking at the time. I had told myself that this was going to be the year that I bought a horse, but I wasn’t planning to do so until closer to the end of 2020.

My trainer, David Beisel, was at WEC for a show and I was sitting at my desk at work, and he sent me a video of a horse showing with no context. I thought he had sent it to the wrong person because we hadn’t really been talking about me looking for horses. Later that day he texted me and told me that I should come to the show and try the horse. His name was Granted, or Grant. Dr. Holly Helbig had him as a sale horse, and it was only his second horse show.

Grant just turned eight, but he hasn’t done a lot of horse showing, so he’s a green bean, but he has the best brain. I had the opportunity to bring him home to my parents’ house during the quarantine. They have a small barn and some acreage. I got to do some intense bonding with him and learn a lot more about his personality.

He’s just as sweet as can be. I can’t believe that I stumbled upon him while I wasn’t even looking for one. I don’t think that I could have tried 100 horses and found one that I love as much as Grant. It’s kind of crazy the way that things have worked out. I think it was good to have him home for a little bit. He’s done a lot of dressage work, so he needed some time to learn to get back into the hunter world and stretch his neck out. He’s generally a quiet horse, and now that I’ve gotten to know him I’m really excited about him.

Now, Grant is back at David’s and we’re ready to start horse showing again this summer.

WEC: Which horses are at your parents’ farm?

Emily: I had a mare for several years while I was in high school, and we bred her while I was in college. We bred her to a stallion that my older sister was obsessed with from David Wright’s barn in Nashville. He was a beautiful stallion and had gotten really good marks on stallion testing. So, we bred my mare to him and she had Caleb, or Empeccable.

That was seven years ago, which is hard to believe that it’s been that long. My little sister got to watch him being born and we’ve watched him grow up. He’s had a lot of people play a role in his upbringing. He spent a little bit of time with a cowboy in Nashville, Dani Grice in Nashville, Lindsay Yinger in Columbus, OH and David Beisel and his assistant trainer Allie McBreen in Goshen, OH. It’s been really cool to see him work with different people and figure things out.

At first we thought that he might be an equitation horse, but now he’s looking like he might be a jumper. We don’t really care what he decides he wants to do, we’re just happy that he ended up being scopey with a big step. We feel lucky that we got one that’s as nice as he is.

My parents also have a little mini named Morty, so we call him “Morty the Shorty”. He was intended to be for my two-year-old niece, so she comes and visits and plays with him. He has the tiniest little saddle, which is really cute, and she’ll sit on him and do leadline.

We also have my little sister’s equitation horse. He’s older, so he’s hanging out and keeping the mini company. My mom loves having the horses at home. She works all of the time, but still wants to start and end her day in the barn.

WEC: How long have you been riding with David Beisel?

Emily: I’ve been riding with David for 17 years. David and Allie would probably laugh if they thought about how many horses we’ve had over the years. At any point in time my family has had as few as zero horses and as many as four. I think that every time we don’t have a horse, David chuckles to himself knowing that we’ll be back. David’s will always be home. He has always been welcoming of me coming in and out as I’ve grown up. His barn has always felt like a place where I’m welcome to come back, whether it was leasing a horse for the summer or buying a horse.

WEC: Have you always ridden hunters?

Emily: I had one jumper named Balou, who was my “seeing-eye horse”. He was the one and only horse I would ever do the jumpers on. I’m a hunter girl through and through!

WEC: Did you ride in college?

Emily: When my sisters and I were in college we didn’t have our own horses. We rode on our respective school’s equestrian teams. I went to Cornell University, and the team was a large part of why I chose to go there. I knew the coach because he was friends with my high school IEA coach. Also, both of my parents went to Cornell, so I already had it on my radar. The school is so big that you kind of need your little niche to make friends and have your group, and that team really did that for me. I was super involved all four years. Sophomore through senior year, I even lived in a house with seven of my teammates. It was really fun, I’m really glad that I did it.

The equestrian team is a little unconventional at Cornell because we shared a barn with the polo team, and they got to practice in the afternoon, so we had to practice at 6 a.m. every morning. I didn’t really have a traditional college experience because sometimes I was waking up and going to practice when other people were coming back from the bars. I wouldn’t have traded it, though. It allowed me to keep riding, which kept me grounded and was a good distraction from school. I also wouldn’t have been able to have my own horse at school, so the team was absolutely critical in me continuing to ride and having that be a part of my life for that time.

Emily: Horses have been my thing for a long time. I have gotten extremely busy with work lately, which is not a hobby, but definitely something I’m committed to. I have to pay for the horses somehow! I used to work at advertising agencies and marketing has always kind of been my sweet spot and what I’ve had a passion for. A little over a year ago, I started working with my mom, who has been in real estate for 20 years. I started working for her team as the Director of Marketing, then I decided to get my real estate license this year. Between the marketing piece and now starting to take on my own clients from a licensed agent standpoint, I’m pretty busy.

I do love that my job gives me some flexibility to go ride in the morning and start my day with my horse, then fit in appointments in the evening. There’s definitely the perk of getting to control my schedule a little bit more. I am at the mercy of when the phone rings, though. The job never really stops, so it will be interesting when I start to show again. I do love that the job is something that I like to do and that it allows me to have horses as a part of my life. I grew up listening to my mom do real estate deals in the car on the way to horse shows, so I’ve kind of been training for this my whole life. It’s been fun to work with my mom and learn from her. It kind of all fell into place over the past year, both career and horse-wise. I’m looking forward to what’s to come.

WEC: Do you have any riding goals?

Emily: It’s funny because I feel like I have the least amount of goals now that I’ve had in a long time. I have a whole different perspective now having a young horse. For so long I was in the grind of qualifying for things and accomplishing things, and it got to be kind of a monotonous routine of figuring out which shows fit in with work. Now, it’s nice and refreshing to enjoy having a horse again and not be in a rush to do anything. He’s young, but he’s so willing, so I’m more focused on taking it slow and developing him the right way.

WEC: What are your summer show plans?

Emily: I’ll be taking him to the two weeks of WEC shows in July, then maybe one week of August and maybe some local shows. My name of the game right now is to find places that are really inviting, well-run shows that are not a super high-stress environment, because I’m trying to make sure that he has really positive experiences at shows.

Happy belated birthday, Emily! We can’t wait to see you and Grant at WEC soon.