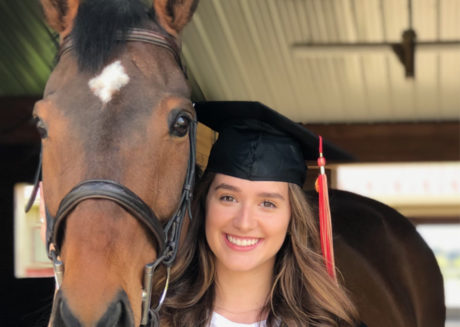 This week’s Sunday Spotlight shines on someone near and dear to us at World Equestrian Center, Sophie Krehmeyer. Over the past year, Sophie has interned in the marketing department at WEC while completing her Equine Business Management and Marketing degree at Otterbein University. You may have seen Sophie at WEC bouncing from ring to ring, helping with anything and everything, always with a smile on her face. This week, we flipped the script on Sophie and asked her to tell us about her riding background, her comeback from a devastating injury and her triumphs with the Otterbein University Equestrian Team.

Sophie: When I was about four years old my mom would take me to breakfast with my grandparents. They would have a group of friends that would always meet them, and one of my mom’s friends would come straight from the barn. She would still be in her breeches and boots, and I always asked my mom why she wore such funny clothes. I came to find out that she had horses and she would tell me about them and show me pictures. I was immediately obsessed and wanted to ride so badly. For my fifth birthday, my parents took me out to her barn. They thought that I would just be toted around on a pony, but it ended up being a very fancy ‘A’ show circuit barn, so I groomed and helped tack up before I rode. That first lesson started it all. I started lessoning every week after that and going to summer camp.

WEC: Tell us about your early riding career.

Sophie: I grew up riding at small backyard barns with amazing lesson horses. I never really rode at a fancy barn, other than my first lesson. I leased a few ponies and horses growing up, all of which were angels who took care of me. Through that, I met my trainer Taylor Forbes Wicker of Full Circle Farm. Taylor taught me about horsemanship and working hard. I was a working student, so I helped with the summer camps and things like that. I’m thankful that I grew up doing that. Some people may not view a smaller lesson barn in the same way as a big show barn, but I had the most amazing experiences and learned more than I probably ever could have at a different barn. I owe most of my riding career to Taylor. She’s also who helped me find my horse that I have today.

WEC: Did you lease or own any horses when you were young?

Sophie: I got to ride a lot of horses growing up, mainly Thoroughbreds or anything I was able to catch ride. My parents always told me that we would never be able to own a horse, that we would just have to do a lease or take lessons. That changed when I turned fifteen.

I would typically go with Taylor to try out potential new lesson horses because she needed to see if a kid could ride them. I went with her to check out some horses and my mom came with us, and I got on this little bay Thoroughbred with a star named Oliver (Ollie). He was the cutest thing I had ever seen. I rode him and I absolutely adored him. When I got off, I told my mom that if I could ever have one horse, it would have to be a horse like that one. That was the one. Little did I know that they were scheming all along, and I was actually trying horses for myself, not for the lesson program.

I went home and sobbed the whole night because I really loved the horse, but thought I could never have him. I woke up the next morning to both of my parents shaking my bed to wake me up. They told me that they couldn’t keep the secret from me any longer, and that they were getting me a horse! They then offered for me to try Ollie again. When I tried him again, I knew that he was perfect. He was my fifteenth birthday gift. I still have him.

WEC: Tell us about Ollie.

Sophie: Ollie was five years old when I got him. He was off-the-track and had spent a year in a field, which was the best thing that could have happened for him. His owner before me had broke him, so he could walk, trot, canter and jump around a little course. When we first took him home he was a stinker, but we got to know each other super well and it got better. He was just a baby and I was a 15-year-old kid. We were both learning together. I think that’s what built the close connection that we have now. I learned so much of my riding on him throughout the last seven or eight years.

It was such an experience being a 15-year-old kid with a 5-year-old Off-The-Track Thoroughbred. He always gave me his heart and tried his best. Even though he could be a little wild or have an attitude, I never really thought anything of it.

WEC: What made you choose Otterbein University for college?

Sophie: When I started looking at colleges, I knew that I wanted to go to a school where I could ride and get a degree in something equine-related. I figured out along the way that I was not a pre-vet kid. I do not do blood, I refuse to give my horse shots or medication for fear that I’m going to harm him. So, I looked for a school with an equine business management program, instead. When I toured Otterbein’s campus and barn, I didn’t even want to look at another school. That was where I wanted to go. Also, I’m from St. Louis, Missouri, so I wanted the experience of being far enough away, but close enough to go home to see my family, and Otterbein was perfect for that since it’s in Westerville, Ohio.

I really wanted to keep Ollie with me in college, and Otterbein was one of the only programs that allowed you to bring your horse and board it at the school’s facility, but not have your horse be a part of the IHSA program. I wasn’t able to bring him my freshman year because the barn was full, so I kept him at my coach Lindsay Yinger’s barn, Lindsay Yinger Show Stables. When a spot opened up at Otterbein during my sophomore year, I got to move Ollie there.

I just graduated from Otterbein with an equine business management major and marketing minor.

WEC: Tell us about riding on the Otterbein University Equestrian Team.

Sophie: I started riding on the IHSA team my freshman year. I came in as an Advanced Walk/Trot/Canter rider because I had never had the experience of showing at a higher level than the local shows that I did as a kid. I really appreciated the experience of showing at those shows, but they weren’t as competitive as some of the rated shows. In IHSA, you want to be placed in the lowest division you qualify for so that you’re at your highest potential.

Throughout my four years at Otterbein I worked my way up to Novice and got to jump at a couple of shows. I also got to compete at Regionals, Zones and Nationals my sophomore year and ended up fifth in Advanced Walk/Trot/Canter division. The team finished fifth that year as well. That was the best that Otterbein had ever done, which was super exciting.

My senior year I got to be president of the team, which was a really special experience for me. During my junior year, I fell off of my horse and broke my L1 vertebrae, so I was out from riding for a couple of months and in a back brace. I was still as supportive as I could be for the team. I was super appreciative that, even though I didn’t get to ride my junior year, my team and coaches still thought that I could be a leader and be a big part of the team. That meant the world to me.

WEC: How did you break your L1 vertebrae?

Sophie: I fell off jumping. I took a long distance and landed on Oliver’s neck and basically just rolled off. It didn’t look bad to my coach and my best friend, but it knocked the wind out of me and I remember thinking that something really hurt. They helped me put Ollie away and I drove home, which was not smart, looking back. A few hours later my mom and boyfriend urged me to see a doctor because I was really uncomfortable. I went to an urgent care and got an x-ray, and found that I broke my L1 vertebrae. They sent me to the hospital where they did a CAT scan and confirmed the break, then I had to see another doctor to get a brace for my back.

My riding has significantly changed since my fall. I was so excited to get back to riding, but once the opportunity came I was super scared. My confidence was completely shot. I took it really slow and got to ride the really well-behaved lesson horses at Otterbein, then slowly worked my way back up on Ollie. I trusted him, but there was a part of me that knew it could happen again and I didn’t want to ever experience that pain level again. I’m so thankful that my coaches, friends and family were super supportive. My coaches were so patient and understanding. I don’t know if I’ll ever be back to where my confidence level was before I fell, but I love this industry, the people and the animals so much that I always want to be a part of it. My injury has really made me who I am now.

WEC: Tell us about your marketing internship at WEC.

Sophie: I was so thankful to have an internship at WEC. I feel like my internship at WEC gave me the insight to the A show world that I had never been able to see or be a part of. I got to interview grand prix riders and derby riders, and watch the most amazing riders that I’ve ever seen compete at a high caliber of competition. It really led me to believe that I would love to be involved in the business side of the industry as a career.

I would like to thank my coaches Kari Briggs, Julia Spatt and Lindsay Yinger. They have helped me become the rider that I am today and I’m so thankful for the opportunities and guidance they’ve given me throughout my years in college. I would also like to thank my parents for supporting my dreams and goals. They mean the world to me. A big thank you also goes out to my trainer growing up, Taylor Forbes Wicker. She is why I love horses and this industry so much and it’s gotten me to the place that I am today. One last thank you goes to all of my friends who have loved and supported me through the ups and downs in my career.

Sophie, we are so glad you chose to intern with us this year. We admire your hard work and dedication to the equine industry and enjoyed every minute of having you at WEC!