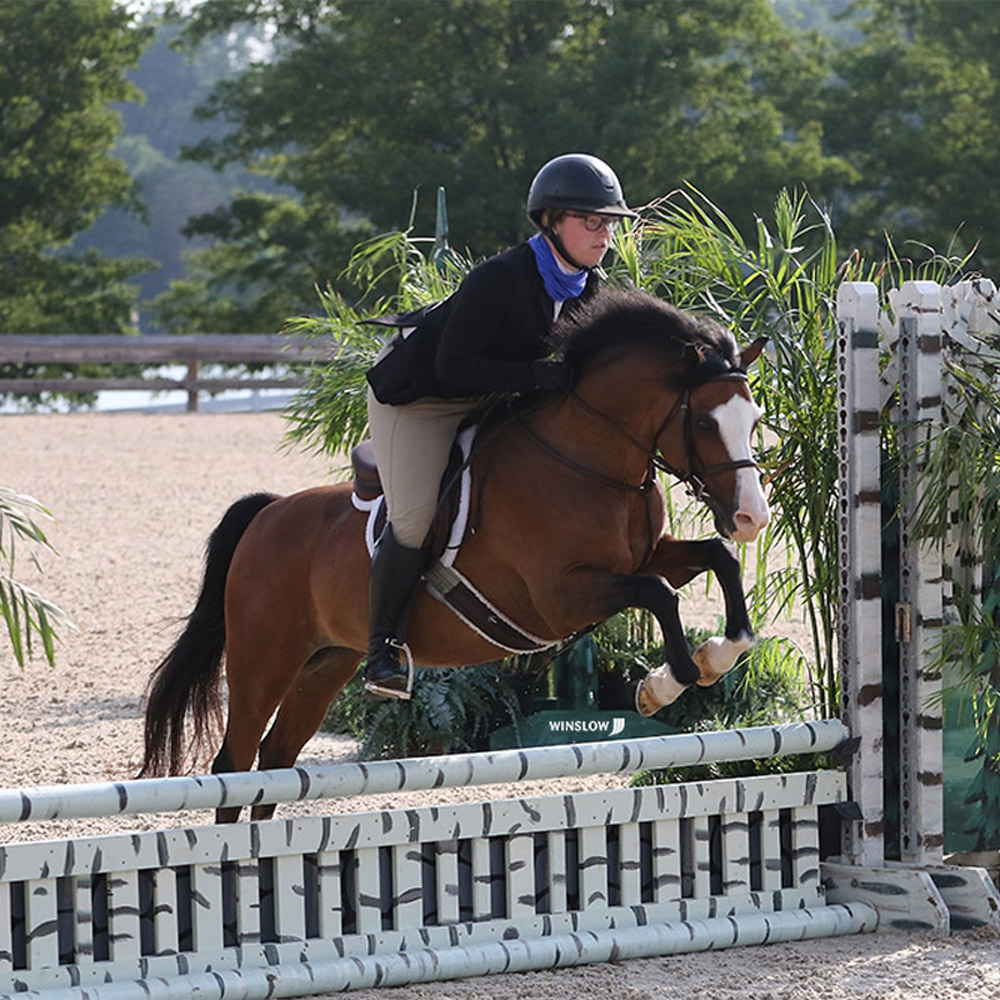 This week’s Sunday Spotlight is Grace York, a working student at Just a Folly Farm in Oxford, Michigan. Grace has an affinity for sassy ponies and has allowed her passion to inspire her current career choice. This week at the World Equestrian Center Summer I show, Grace showed an adorable pony named Boca’s Suave to top placings in the 2′ Hunters. Grace took time to chat with us between showing and working to tell us about her job, her spunky pony mount and her love of riding on the University of Tennessee at Martin Equestrian Team.

Grace: A girl that lived down the street from me broke her leg riding, so that’s how I found out about horseback riding and wanted to try it. My mom noted that I didn’t like any other sports, so she figured that we might as well try it. She got the trainer’s number from our neighbor down the street and called Dorothy Campbell at Just a Folly Farm. I was four years old at the time. I rode and loved it, and now I’ve been riding with Just a Folly Farm for the past 15 years. It’s the only place I’ve ever ridden.

WEC: Tell us about your 15 years at Just a Folly Farm.

Grace: There has been a lot of ups and downs when it comes to the horses. I’ve had bad ponies and I’ve had great ponies, and I would not be the rider I am today without all of them. Just a Folly Farm has been great, they have given me so many opportunities. If one of my horses was broken or something, they would always bring something for me to ride.

WEC: Were there any particularly memorable ponies?

Grace: I had this pony named Whiskers. I had gone to try him at midnight at Ledges. We brought him home and he came with the worst clip job I had ever seen in my life. He hated our indoor and ran super fast. He would just run and stop.

The next year, I had a pony named Rocky. He was awesome. We won everything in the Short Stirrup. We did all of it and he was so good.

Then I had a Large Pony named Spanky. We went to Pony Finals and were 11th in the hack.

We just sold my equitation horse in August. He was great. His name was Quidado, or Q.

WEC: Do you have your own horse now?

Grace: I don’t have my own horse now. I’m a working student.

WEC: How do you like being a working student?

Grace: It’s a lot of hard work, but it’s very rewarding. I love it. It’s really easy to work with people that I’ve been around forever, too. Last year, I just worked at the shows. This year, I’ve been working full-time at the farm with COVID-19 and everything. I do full care for all of the clients at the barn, so I work about 60 hours per week there. I flat a lot of the horses that don’t have lessons and school two ponies that we have, too. I show the Small Pony in the 2′ Hunters.

WEC: Tell us about the pony that you show.

Grace: His name is Boca’s Suave, but we call him Marmaduke. He just turned 11 on June 24th. I had a little birthday celebration for him at the barn. He is the sassiest thing ever. He knows that he is the prettiest pony. We won a class in March, which was exciting. He’s been so good this week after not being off of the farm for three or four months.

WEC: Are you in school?

Grace: Yes, I’m a nursing major at University of Tennessee at Martin. I ride on their NCAA equestrian team. I love the team. All of the girls are so nice. I’ve met my best friends there. We all get along so well. It’s so nice to be surrounded by people who understand your true passion. For example, my best friend is a working student, too. So, we share stories and everything. The team has 42 girls now, which is about a medium-sized team. My class is big, there’s about 15 of us. I’m an incoming sophomore.

I really like the meets. I got to warm up horses this year and I got to demo a horse, so that was fun. I’m excited for next season.

Grace: (Laughing) Not really! I like to hang out with my friends…I like horses, I like sunsets, I like chips and salsa. Seriously, though, I enjoy school. I like studying for my classes. I got a 4.0 GPA the past two semesters. My parents were very happy.

Grace:  I’m planning on becoming a nurse anesthetist so that I can make some money and get my own horse. I would really like to move into the jumpers. If I had enough money, I’d have both a hunter and a jumper. But, the jumpers would be my first choice. My long-term goal would be to jump the High Amateur Owner.

WEC: Have you ridden in the jumpers before?

Grace: The first horse I did the jumpers on, Berrymere, I showed at WEC in 2016 when the R+L Arena was still the jumper ring. Then, in March, I got to show the same horse. I’ve been riding him on and off for four years, so it was fun. It’s nice to see that he’s still as fun as he was.

WEC: Do you have any advice for those thinking about becoming a working student?

Grace: If you’re thinking about becoming a working student, I would say to do it. Getting the experience is worth at least trying. If you’re on the fence, just go and do it. If you don’t like it, then you don’t have to keep doing it, but at least then you know.

Thank you for the great advice, Grace. Great job at the show this week!