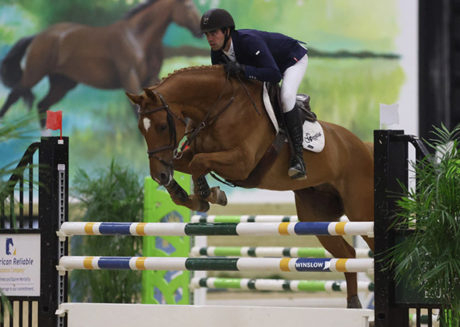 This afternoon brought plenty of thrilling equestrian sport to the Sanctuary Arena at World Equestrian Center for the $25,000 WEC Grand Prix and the $7,500 Futures Prix 1.30m sponsored by Voltaire Design. Both classes featured courses designed by Bobby Murphy of Lexington, Kentucky, and multiple double clear rounds in each class meant speed was the determining factor for top placings, making for exciting head-to-head competition in the jump-offs.

The course for this afternoon’s $25,000 WEC Grand Prix featured 15 jumping efforts including three combinations, and rewarded adjustable rides with both forward and quiet lines. Ryan Genn and Wilhelm Genn’s VDL Gerinus T (Arezzo VDL x Rosalina) were on form again this afternoon, bringing their A-game straight from their win on Thursday to the Grand Prix. Genn and the 9-year-old Dutch Warmblood gelding easily managed a clear first round in 72.243 seconds, well under the time allowed of 84 seconds. The pair returned last for the jump-off and, knowing they had to beat tough seasoned competition, gave the course their all for a second clear round in 34.725 seconds and the win in the class.

New Zealand’s Sharn Wordley and his own seasoned Grand Prix stallion Gatsby (Simba x Daisy Cruise) were just behind Genn’s time, making Genn and the chestnut gelding truly earn their victory. The pair were fresh off of a second-place finish in Lamplight’s $25,000 Smartpak Grand Prix and were on fire this afternoon. Wordley and his gray Irish Sport Horse delivered a clear first round in 76.083 seconds, securing a spot in the jump-off. When the pair returned on the short course, they stuck to fast paced inside turns, stopping the clock at 35.183 seconds, taking the second place spot.

The familiar faces of David Beisel and his own Essince W (Chacco Blue x Rossan) took the yellow ribbon in this afternoon’s $25,000 WEC Grand Prix. The pair have won countless grands prix at World Equestrian Center and negotiated two foot-perfect rounds again today. Beisel and the 10-year-old KWPN gelding were clear in the first round in a time of 73.305. The duo returned for the jump-off and raced across the short course in 36.283 seconds for third place.

Genn took a moment to chat with us ringside about VDL Gerinus T, “He’s awesome. We’ve had him since he was five years old. He was from the VDL auction in Florida. He escaped during the auction and ran around, and they couldn’t sell him after that. So, my dad had him in partnership with VDL after that. He’s nine this year, so we definitely took our time. He won immediately at every level. As a 5-year-old he won every class, and same thing as a 6-year-old. We just kind of took our time with him a little bit. He had serious traffic issues and he was a little crazy, but he’s finally starting to calm down now.”

When asked about today’s class, Genn replied, “Today’s class was a really hard 1.40m track. There were some good horses, too. The one Sharn was on is a super experienced horse. So, that just shows VDL Gerinus T’s natural ability. He’s one of those horses where the faster you go, the happier he is. If I try to make him go slow, he gets mad. He always tries really hard.”

Genn gave us the scoop on VDL Gerinus T’s personality, “He’s really sweet, but he can be a little obnoxious. If you’ve ever seen the Tootsie Pop commercials with the owl where he licks the lollipop three times, then he bites it, that’s VDL Gerinus T. He’ll make you think he’s sweet, then he’ll bite you as soon as you turn around. He just has that kind of personality. But, he always tries super hard and always wants to go. He’s awesome. He’s worth all of the extra work.”

He also commented on his other mounts in the class, “Dante’s Inferno (Diardo), who took 7th place, is my most experienced one. The other ones are all new to this. Lemans (L’arc de Triomphe x Misabelle), who took 6th place, is a really green 8-year-old. I was happy for him to step up and do this right away. He’s only done one 1.40m class before coming here, and he won that class. So, this is just his second 1.40m class. He’s actually a home bred from Eduardo Leon who owns Bugatti. He greened up a bit in the jump-off, but I was really proud of the way he jumped today. Coco Chanel M (Cristallo II x Pepper Ann) should have been clean, it was my fault. She was jumping really careful and I just didn’t leg her enough to the back rail. As fun as it is to win, I’m still upset about that. She’s awesome, though. It’s also her first time doing this. She walks into any ring and jumps anything. She’s going to be an amazing horse.”

The $7,500 Futures Prix 1.30m sponsored by Voltaire Design saw an incredible win by Jill Gaffney of Freestyling Farms in Batavia, Ohio and Freestyling Farms, LLC’s Z Love Story (Hunter x Elli) who left other entries in the dust with an impossibly quick jump-off. The course for the class featured 14 jumping efforts, including three combinations and two inside turn options in the jump-off.

Gaffney and Freestyling Farms, LLC’s Z Love Story (Hunter x Elli) are no strangers to the winner’s circle at World Equestrian Center, as the pair have taken top honors in multiple $5,000 Welcome Stakes. This afternoon, Gaffney and the 13-year-old Holsteiner mare blazed through the first round in 71.488 seconds, well under the time allowed of 79 seconds. The pair continued straight to the jump-off of the Table II 2b class, picking up even more pace and stopping the clock at 27.562 seconds, besting second place by more than three seconds for the win.

David Beisel also found success in the Futures Prix aboard his own Iris (Quintero x Salma). Beisel and the 12-year-old Holsteiner mare were clear in the first round in 74.813 seconds, and continued straight to the jump-off. The pair kept their pace, taking inside turns and crossing the timers at 30.869 for third place.

Gaffney stuck around after the class to tell us about her ride aboard Z Love Story, “Well, she bucked me off in the warm up ring and ran around. However, once we got into the show ring, she was game-ready. She was ready to win, I could feel it. I knew that I could go as fast as I could possibly go. She was amazing.”