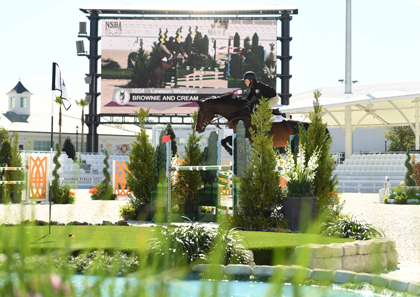 Lawson: I ride with Gaston Escamez at GE Sporthorses.

Lawson: I got into riding by watching my older sister take a riding lesson. I was about 4 years old at the time, and the first time that I saw her ride I decided that I wanted to ride, too. I wanted to do the same thing that she did. I started out an a little green chestnut pony. We went to local schooling shows and I started in the Novice Hunters. I moved my way up to the Crossrails, then switched into the jumpers.

WEC: What made you decide to make the switch to the jumper ring?

Lawson: I have three horses: Brownie and Cream (Quintero x Vanilla G), Finisterra, and Chapiletto. I’ve had Brownie and Cream and Finisterra for about six or seven months and we just got Chapiletto a couple of weeks ago. Chapiletto is a big goof and such a baby. He’s very mouthy, but he’s really sweet. Brownie has her moments where she is just a mare, but she’s actually a really sweet horse. There’s not a mean bone in her body. Finisterra is just bossy. They all have their own little personalities. They’re all really sweet, nice and kind. They were actually all doing the grand prix at one point, which is cool.

WEC: What are your horses’ favorite treats?

Lawson: They all like sour candy for some reason, like Sour Patch Kids. I had them with me once and the horses wanted a treat, so I gave it to them and they just wanted more.

WEC: What are some of your riding accomplishments?

Lawson: Moving up to the Mediums with Brownie has been a big accomplishment. I also really enjoyed going to Zone 4 Finals. I ended up Champion and Reserve in Zone 4 with Brownie and Finisterra in the High Child/Adults.

Lawson: My goal is to be in the Olympics and represent America.

Lawson: I don’t really have any hobbies outside of riding. I like to hang out with my friends, but mostly everything I do revolves around horses. I even do Florida Virtual School so I can show all of the time.

Thank you Lawson and congratulations on all of your success so far this winter!