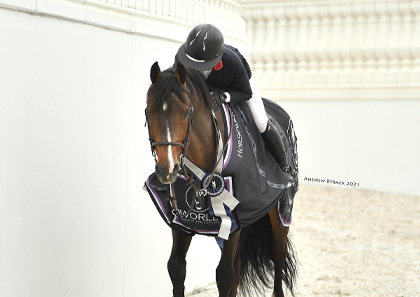 Feature classes kicked off on Thursday with the $20,000 Welcome Prix. Just three entries managed to jump double clear, but it was Kady Abrahamson aboard Sharn Wordley and Steve Tinti’s Banco Du Moulin (Popstar Lozonais x Gerboise Du Moulin) that claimed the victory. The pair managed one of the fastest first rounds of the class, jumping clear in 76.611 seconds. They continued straight to the jump-off and raced through the timers at 39.873 seconds, moving to the top of the leaderboard where they remained throughout the class. Along with celebrating her victory, Abrahamson also celebrated her birthday. During her victory gallop, she wore a birthday sash and Banco Du Moulin wore a tiny pink crown.

Amanda Steege owned Derby Friday taking top honors in both the $20,000 WEC Hunter Derby 3’6″-3’9″ and the $15,000 WEC Derby 3′ Open. Steege and Cheryl Olsten’s Lafitte De Muze (Darco x Everlychin De La Pomme) found a near-flawless first round in the $20,000 WEC Hunter Derby 3’6″-3’9″, taking all four high options for an outstanding score of 99. The pair brought the same finesse to the handy round, taking inside turns to fences 2, 5 and 6, along with all four high options. They earned a second score of 94, brining their overall total score to 193 for 1st place.

Steege also took the blue ribbon in the $15,000 WEC Derby 3′ Open aboard Lisa Arena Davis’ Balou (Balou Du Rouet). Steege and Balou delivered a lovely first round, taking all four high options for a score of 91. The pair returned last in the handy round, with a stylish performance that included tidy inside turns to fences 5, 6, 7 and 9, along with all four high options. They earned a handy round score of 90, bringing their two-round total to 181 for the win.

Friday’s $15,000 WEC Derby 3′ Open featured two special awards: the Style of Riding Award and the Shapley’s Champion Groom Award. Before the start of the handy round in the $15,000 WEC Derby 3′ Open, the prestigious Style of Riding Award was presented to Brooke Kemper for her classic style and her sportsmanship. The Style of Riding Award is generously donated by Bill Rube to be awarded to the rider who best displays the American Style of riding in the ring and sportsmanship outside of the competition arena. Kemper received an elegant leather duffel bag and wore a white rose corsage on her lapel throughout the handy round to signify her achievement.

The Shapley’s Champion Groom Award for the best turnout in the class was presented to the groom of 4th place finisher in the $15,000 WEC Derby 3′ Open, Hamilton (Numero Uno x Upper Class). Shapley’s is a proud sponsor of the World Equestrian Center and is thrilled provide an award each week of the Winter Spectacular to the groom of the best turned out horse. Hamilton’s groom received a Shapley’s Award Bucket for the gelding’s stunning turnout.

Derby Friday also saw 38 entries vying for the win in the $15,000 WEC Derby 3′ Non Pro, but it was 13-year-old Addison McQuaker and her own Golden Ticket (Stakkato Gold) that earned the top spot. The pair was breathtaking, earning a score of 91, the highest score of the first round. In the handy round, McQuaker piloted Golden Ticket seamlessly through all inside turns, earning a second score of 92 for a total score of 183, topping the class.

Saturday’s $75,000 Grand Prix sponsored by Golden Ocala Golf & Equestrian Club under the lights in the WEC Grand Arena saw an exciting 1-2 victory for Mexico’s Santiago Lambre aboard his own Comtess and Easy Girl (Conthargos x Nanina), respectively. Lambre and Comtess secured a return in the jump-off early in the first round, jumping clear in 82.957 seconds. He returned aboard Easy Girl, earning a second spot in the short round with a clear round time of 82.536. Lambre managed two clear jump-off rounds, first aboard Comtess in 36.506 seconds, then aboard Easy Girl in 37.216 seconds, and his quick times landed him in 1st and 2nd place.

The WEC Grand Arena also hosted the $7,500 Futures Prix on Saturday where junior Izzy Beisel and David Beisel’s Ammeretto (Numero Uno x Ranna) topped the class by two seconds in the jump-off. Beisel and Ammeretto took to the course near the top of the order, jumping a clear first round in 73.655 seconds. They continued straight to the jump-off, choosing a challenging inside approach to fence 15 that shaved crucial seconds off of their time. Beisel and Ammeretto galloped through the timers at 34.340 seconds with all rails up, moving to the top of the leaderboard and ultimately winning the class.