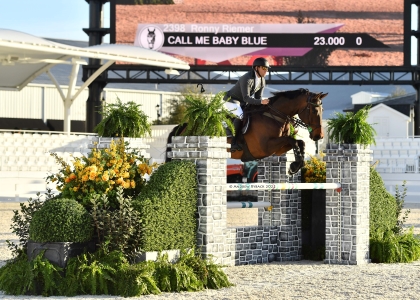 This week’s Ocala Sunday Spotlight shines on Ronny & Chanel Riemer of RCR Equestrian Inc. German rider, Ronny Riemer is an accomplished Grand Prix rider and trainer, that rode for names such as Franke Sloothaak and Paul Schockemöhle. Ronny is well known for his cheeky videos about the equestrian industry as the character, ‘The German Riding Instructor.’ We caught up with Ronny and his wife, Chanel about their business RCR Equestrian Inc.

WEC: Tell us a bit about yourself and RCR Equestrian Inc.

Ronny: My wife, Chanel and I have been running RCR Equestrian Inc., which is a sales, lesson, clinic and boarding operation located here in Ocala, Florida, basically eight minutes away from World Equestrian Center. We moved here in January 2012. We founded RCR Equestrian Inc. in 2015 and that’s when we moved the operation to the farm that we are currently at. We have a seven-stall barn that currently holds nine horses. We had to put up two temporary stalls.

The operation was mainly focused on the winter circuit, and we would fly to Germany in the summer to try horses, that we would bring back to the US to sell. When we first moved here, we started very serious. We were the new kids on the block, and we wanted to be taken seriously. We acted very professional, but then changed back to our funny selves where we attracted a fun bunch. We are now surrounded by amazing students, riders and owners.

Our operation is a fair mix of us riding and focusing on our clients. We rotate horses each week of the circuit, so currently we have seven horses here and four at home. Then next week we will swap a few so they can have a week off to rest. We are always busy but, we have the best time running RCR.

WEC: When did you establish the character ‘The German Riding Instructor’?

Ronny: One summer we didn’t have many horses at home. I had way too much time on my hands and way too much time to come up with stuff. That’s when the character was born. It was a little out of boredom and a little bit out of being cheeky with things that we didn’t fully agree with in the industry.

I had no clue that the videos would take off they way that they did. But, if I would have known that something like that would have taken off, I wouldn’t have waited for five years to start it.

WEC: Tell us how feel when you are watching your students on the sidelines.

Ronny: I am always very invested in my students, the lower the classes are the more relaxed I am at the ingate, but when my fairly good friend Rowan Willis goes into the Grand Prix, I always get a bit more expressive. In the Grand Prix, every millimeter counts and the jump-offs are always so quick. I think East Coast riders are the fastest riders out there. The riders that came over from California in the summer were running their heels off.

Chanel: I think it is almost more nerve wracking to be on the sidelines than riding in the ring because you are rooting for your riders, so it adds an excitement level it all.

WEC: Tell us about your competition horses.

Ronny: My competition horse, Ricky Baby is on a little bit of a break, but when he comes back, I am going to give everyone a run for their money.

Chanel: I just moved up to the 1.20m on my horse Come Back, also known as Bucky the Brave, Sir Buckington and much more. Which was our goal for the end of circuit, so it is very exciting. Last winter at WEC was our officially first show, where we started in the .90s and we didn’t always see the finish line. So, we have come a very long way since then.

Ronny: It’s very exciting that we are moving goals now. I want Chanel to do the 1.30m at the end of the circuit.

Thank you, Ronny and Chanel, from RCR Equestrian Inc. for taking the time to speak with us! We wish you all the best.