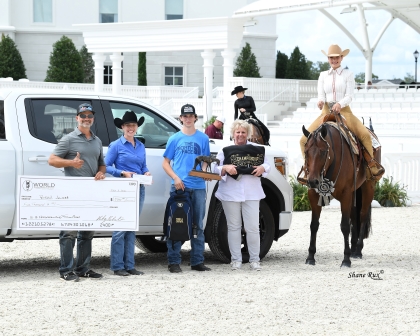 The first week of the inaugural World Equestrian Center – Ocala 2021 Championship Show kicked off with a variety of thrilling equestrian competition. Exhibitors, trainers, vendors and sponsors traveled from all over the country to compete at the first ever Championship Show. All of the classes were filled with fierce competition and amazing prizes.

The highlight of the week was the Win A Truck 15-18 Horsemanship Challenge where youth exhibitors tackled difficult horsemanship patterns to win a brand new $60,000 2021 GMC Truck. The competition began on Friday, October 1 where the first go was held in the Grand Arena. The top 10 finalists from the first go qualified to compete in the Finals on Sunday, October 3. On Saturday, riders that did not qualify had another chance to try and earn a top 10 finish so they could compete for the truck on Sunday.

On Sunday afternoon the 20 finalists gathered in the WEC Grand Arena to contest the difficult pattern, and ultimately it was Hanna Iselin Olaussen from San Antonio, Texas and her own Wearin Only Moonlite who prevailed to take home an abundance of prizes including the brand new 2021 GMC Truck. Her trainer Brad Jewett was awarded the winning trainer bonus of $5,000.

Olaussen thought that the pattern was very challenging, “The pattern was extremely tough today. It was like our World Show pattern but upped to another level. So it was very exciting and had some pieces that we really don’t get to see too often like the leg yield on the left lead. We rarely see maneuvers like that.” Even though the pattern was tough, Olaussen knew that Wearin Only Moonlite was ready for the challenge, “He felt perfect today. I was pretty nervous but once I got in that pen all my nerves went away. I love to extend the jog and spin with him. He has so much athletic ability and truly just loves his job, he really is one of a kind.”

Olaussen is currently studying at Texas A&M University where she is riding Horsemanship and majoring in Animal Science with the goal of becoming a veterinarian. “I just arrived the other morning from college, and I was speechless when I saw the facility for the first time. I have no words for how amazing this place is. The thought that went into the horses is just incredible. I still can’t believe that I am at this facility and just won a brand-new truck,” smiled Olaussen.

Olaussen’s trainer Brad Jewett was very proud of his student, “I told Hanna that this pattern is no walk in the park and the competition is tough. There were quite a few up-and-coming riders in the class and the pattern was the Youth World Pattern on steroids, but Hanna is an amazing rider. She nailed every single mark today and I am super thankful for the judges for rewarding her ride because she didn’t miss a mark anywhere. Earning the $5,000 bonus was just another amazing add to the class. I honestly forgot about that part because I was so focused on the class, but it truly was just an amazing day.

“This is our first time ever here and although I have seen the photos – honestly it’s even more amazing when you see it in person. The photos don’t even do it justice. The detail and the care of the horses in the planning is just incredible. We are so blessed to stay in the hotel and enjoy the facility and service. Just everything about this place is just unreal. We will one hundred percent be back,” expressed Jewett.

The week was full of amazing equestrian competition and there is still so much more to come. To view the results from this week click here.

In addition to the Youth Win a Truck Challenge class, we caught up with additional class winners this week.

On Wednesday we talked with Aaron Moses after he won the Senior Western Pleasure class aboard 3Gs Partnership LLC’s KM Suddenly So Easy.

“KM Suddenly So Easy is a new horse to me. My customers, Kristen Galyean bought her last year, so I haven’t been able to show her very much. She is super honest and listens extremely well,” expressed Moses. Moses and KM Suddenly So Easy dominated the class earning the first-place scores from three out of the four judges.

On Friday, trail dominated in Arena 2 and we caught up with a few of the top riders.

Sara B. Simons and Al Of A Sudden captured the Open Junior Trail Stakes on Thursday afternoon. “Al Of A Sudden is a pretty special horse. He is owned by Mike and Michelle Preston from Kent, Washington. I have had him for about two years now and he won the Quarter World Green Trail last year and now he is a junior. He is also a paint horse, so he does all the huge APHA events as well,” said Simons.

Saturday, also saw many trail competitors competing for the top prize. Melissa A. Jones and Jessica M. Baird’s IB Real Lazy conquered the 4 & 5 Year Old Limited Trail Stakes. “Baird’s IB Real Lazy, has an amazing personality. He loves doing his job and really is a true show horse. The coolest thing about him is that he is very consistent every time he steps in the ring. He is five years old and is owned by Jessica Baird who also shows him as well. We absolutely adore him,” says Jones.

The Championship Show also featured a 2’6” Hunter Derby on Saturday afternoon, where 28 stunning hunters took to the Adequan Arena to contest a winding course designed by Doug Russel. None could best Robert and Caron Stucky’s Triple Gold. Stucky and the five-year-old Holsteiner stallion produced a lovely first course taking all three high options to earn the highest first round score. Stucky and Triple Gold were the last pair to return for the handy, taking every inside turn available to earn a very high score of 95 to earn first place.

Congratulations to all exhibitors and trainers on an amazing week of equestrian sport!