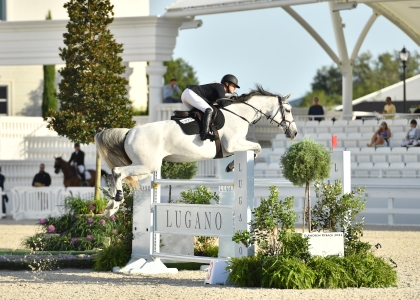 Forty-three combinations representing 13 different countries gathered at the WEC Grand Arena on the picturesque sunny, Florida morning. By the end of the first round, seven had qualified for the jump-off and three went double clear.

Tracy Fenney and the 11-year-old Danish Warmblood mare were the first pair to deliver a clean round in 82.373 seconds, well under the time allowed of 85 seconds.

Fenney spoke about today’s first round track, “This course was just as difficult as the course from last night. The FEI double combination was a problem last night and this morning it was fence four, so right off the bat it was challenging. There were quite a few questions asked with the striding. The line after the orange skinny vertical was really tight in five and Apple has a huge step, so I had to really sit her back. Then it was a big push to get out of the triple.  The chapel fence you had to shape, so you could get the eight done to the going four, then when you think you’re finally done you have to jump a tall skinny vertical on the rail.”

Although the course was tough, it was no match for Fenney and the talented MTM Apple. The pair were first to return for the jump-off, “I like going first here. Most people prefer to go toward the end because you are a bit better off watching people go before you. On Apple, I am better just doing my thing,” laughed Fenney. “I do what I do, then hope they chance after me and make mistakes.”

Fenney and MTM Apple cruised right around the short course in an uncatchable time of 37.942 seconds for the victory.

An additional $5,000 was award to the fastest four-faulter of the $50,000 Lugano Diamonds National Grand Prix. Aaron Vale and Lori Osterstock’s I. Adermie R 4 snagged the award with a fast time of 77.747 seconds with one rail down.