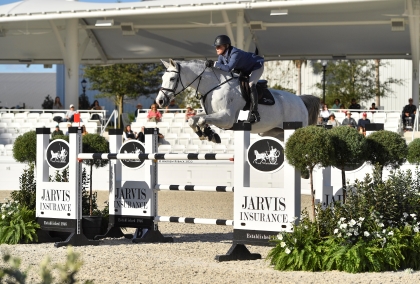 Fenney and the fan favorite MTM Apple were one of the first few entries down the ramp into the WEC Grand Arena, delivering a flawless first round stopping the clock at 82.170 seconds.

Fenney and the now 11-year-old Danish Warmblood mare advanced straight to the jump-off, “I watched Rodrigo [Pessoa] go right before me and he made some very tight inside turns. I knew I needed to go fast to be competitive today. I knew the leave out to the in-and-out was a nine, but in the jump-off, I was slowing down so much in the nine, I thought I did the ten for a quick second because she got there so quickly. But I think I had the time from fence one to two.”

Fenney and the speedy MTM Apple caught fence one on a nice gallop, landing left to walk to fence two in eight strides. The pair quickly turned back to the Chapel Liverpool to swiftly gallop to the Lugano Diamonds oxer in eight strides. They easily marched down to the double combination in nine strides to streamline the last bending line, leaving all rails up to stop the jump-off clock at 37.192 seconds, posting a time that no other competitor could best.

“Apple is truly amazing. People are so funny, because they see me and this big mare mosey into the ring, thinking there is no way she’s fast. I’ve had numerous people tell me that they know how much I like to win and there’s no way that mare can do it. Then Apple just picks up a canter and hits a different gear. So now people know, don’t judge a book by its cover,” laughed Fenney.

Brazil’s Santiago Lambre and his own The Diamant Rose Z (Toulon x Diamant Z) earned second place honors in today’s $20,000 C. Jarvis Insurance Welcome Prix. Lambre and the 11-year-old Zangersheide mare were last week’s winners of the Welcome Prix, besting 28 other competitors. Lambre and The Diamant Rose Z produced a smooth first round, stopping the timers at 83.353 seconds. The pair jumped-off immediately, slicing fence one to roll to fence two in nine strides. Lambre and The Diamant Rose Z swiftly turned back to the Chapel Liverpool vertical in seven strides to land left and soar to the Lugano Diamonds oxer. The pair flew through the remainder of the course to stop the jump-off clock at 38.071 seconds, earning second place.

Martien Van Der Hoeven and Luccirelli International, LLC’s Morris Horta (Eldorado Van De Zeshoek x Irenice Horta) rounded out the top three in today’s $20,000 C. Jarvis Insurance Welcome Prix. Hoeven and the 10-year-old Belgian Warmblood gelding navigated a lovely first round stopping the first-round clock at 83.781 seconds, just within the time allowed of 84 seconds. The pair advanced straight to the jump-off, galloping from fence one to two in nine strides. The pair landed right to slice fence two. Hoeven and Morris Horta soared over the Lugano Diamonds oxer and galloped to the C. Jarvis Insurance double combination in nine strides. The pair landed right and flew through the last line in eleven strides to stop the timers at 39.776 seconds, securing third.