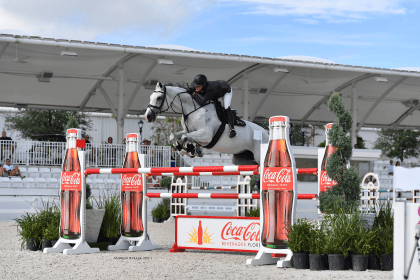 Fenney and MTM Apple (Favorit Ask x Kong’s Whopsie) delivered a clean first round toward the end of the class, stopping the clock at 79.530 seconds, just under the time allowed of 81 seconds. “I thought the course was hard, but it is an entirely different class when it’s not under the lights. During the day the horses aren’t as spooky, and the environment is a lot more calm. So even though it was a hard course, having the class in the morning really helped a lot of riders. Many did go clear but this is such a great facility, all the horses should jump well because we have everything going for us here.”

Fenney and MTM Apple were the second to last pair to return to the jump-off, “I knew how fast my time was on [MTM Dolce Vita] but then Sharn went in and beat that time. I knew I was going to have to be a tad bit faster but then Will [Simpson] and Santiago [Lambre] went in, and really beat Sharn’s time. So, I knew I had to just give it my all because I had nothing to lose.”

Fenney and the ten-year-old Danish Warmblood mare started off on a strong gallop to fence one to roll to fence two in nine strides. Fenney and MTM Apple whipped around to fence three to fly on a flat gallop to the Coca-Cola Beverages oxer. The pair landed and swiftly rolled back to the Kentucky Performance Products vertical to soar to the double combination in nine strides. The pair jumped out of the double combination to fly home, stopping the clock at 38.911 seconds to earn Week X’s $75,000 Coca-Cola Beverages Florida Grand Prix win.

Fenney was incredibly proud of the scopey mare, “MTM Apple is amazing. She is such a good girl and is in it win it with me every time. We have had such an amazing summer here and we can’t wait to come back for the winter.”

Just behind Fenney and MTM Apple, were Will Simpson and his own Chacco P (Chacco Blue x Cerap). The fast pair earned the $5,000 fastest four faulter award in last week’s grand prix and in Week VI’s grand prix. Simpson and the 12-year-old Mecklenburg gelding navigated a fast and clean first round stopping the clock at 76.390 seconds. Simpson and Chacco P returned for the jump-off, flying from fence one to two in nine strides. The pair rolled back to the CaptiveOne Advisors oxer to fly to the Coca-Cola Beverages oxer in 12 strides. Simpson and Chacco P took a very tidy turn to the tall vertical to fly through the rest of the course stopping the clock at 39.355 seconds which was the leading time until Fenney and MTM Apple entered the ring.

Olympic rider, Santigao Lambre (MEX) and his own Dingeman took home third place honors in today’s $75,000 Coca-Cola Beverages Florida Grand Prix. Lambre has earned many top three placings throughout the NSBA Ocala Summer Series on several different horses. Lambre and the KWPN gelding produced a flawless first round stopping the clock at 77.915 seconds. Lambre and Dingeman returned for the jump-off flying from fence one to two on a flat gallop to quickly rollback to three. The pair soared to the Coca-Cola Beverages oxer to gallop through the rest of the jump-off stopping the jump-off clock at 40.198 seconds, to round out the top three.

The additional award of $5,000 to the fastest four-faulter in this morning’s $75,000 Coca-Cola Beverages Florida Grand Prix went to New Zealand’s Sharn Wordley and his own Casper. Wordley earned second place honors on Casper during Week VII’s Grand Prix. Wordley also earned fourth place in today’s grand prix aboard Gatsby. Worldey and Casper had an early rail in the triple combination but flew through the rest of the course to stop the first round clock at 75.991 seconds to earn the fastest four-faulter award.

The non-award-winning entry that received the Luck of the Draw $5,000 prize was Justine Dutton and Ravello.