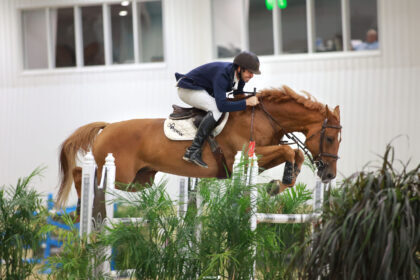 Courses for the classes were designed by 2008 Beijing Olympics course designer, Steve Stephens of Stephens Equestrian Designs, Inc. Stephens brings more than forty years of experience in the equestrian industry to bear on his unique designs.

A field of 14 horse and rider combinations contested the grand prix course, with eight pairs qualifying to advance to the jump off. Ultimately it was Ryan Genn of Rheinland Farm in Lebanon, Ohio and Wilhelm Genn’s VDL Gerinus T (Arezzo VDL x Rosalina) who captured the win with a double clear effort and a blazing jump-off time of 39.380. Genn and the athletic 2011 Dutch Warmblood gelding have been frequent visitors to the winner’s circle at World Equestrian Center – Wilmington in 2021.

Earlier this afternoon, the Sanctuary Arena hosted 12 horse and rider combinations for the $10,000 WEC Futures Prix 1.30m. Seven pairs qualified for the jump-off, but it was Logan Taylor aboard First Finch who took home the win.

Taylor of Cincinnati, Ohio piloted her own First Finch (Amadeus x Silvia), an 11-year-old KWPN gelding to a double clear effort and a jump-off time of 42.761 for the win.

Diana Conlon of Lexington, Kentucky and her own Wondergirl (Mylord Cathargo x Winning Girl) rounded out the top three. Conlon and the a 9-year-old Oldenburg mare also delivered a double clear performance, with a jump-off time of 47.510, sliding them into the third place position.