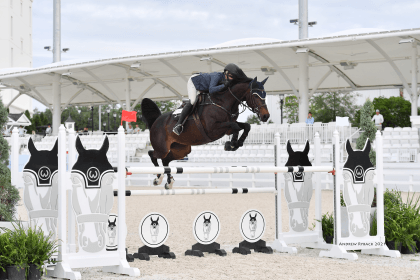 Feature classes for Week III of the World Equestrian Center – Ocala Summer Series kicked off early this morning with 41 entries vying for the win in the $15,000 WEC Welcome Prix. The course for the class was designed by FEI Level III course designer Joey Rycroft of Canada.

The course featured a winding track that included a triple bar and triple combination. Twelve entries jumped clear in the first round qualifying them for the speed course. Out of the 12 entries, only six entries went double clear, with Tracy Fenney and MTM Farm’s MTM Dolce Vita claiming the victory.

“I think she is really comfortable right now at this height, and this past Saturday night’s class was her first time under the lights,” said Fenney. “I over did her a little bit in the beginning, and I am the one that had the second jump down just pushing her too much not knowing how she would handle it, but all the hard parts she did great. I am super ecstatic with her performance and how well she has come along.”

The pair was second in the order and managed a fast first round time of 74.921 seconds, earning them the chance to stay in the ring and jump off. “She’s a naturally fast horse and she is careful,” described Fenney. “I have had her for about a year now, [but] she is still pretty young.”

Fenney & MTM Dolce Vita advanced straight to the jump-off, taking an unexpected and tough inside turn to the double combination that not many other competitors attempted. Fenney and MTM Dolce Vita soared through the rest of the course stopping the clock at 37.679 seconds, earning the first-place finish.

Second place honors went to Jamie Taylor of Temecula, California, and Cocoliche of Greenhill Z owned by Spyglass Hill. Taylor and the 11-year-old Zangershiede gelding were the last pair to enter the class, delivering a clean and smooth first round stopping the clock at 75.566 seconds, qualifying for the jump-off. Taylor and Cocoliche of Greenhill Z (Biscut of Greenhill x Wyazinthe MH) jumped-off immediately, leaving a stride out from the combination to the Lugano oxer, earning them a time of 38.646 seconds.