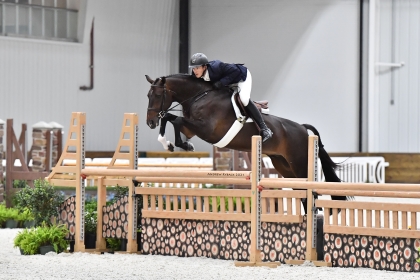 Week III’s Derby Friday took over the CaptiveOne Indoor Arena today as more than 50 entries contested the $12,500 WEC Ocala 3’6” – 3’9” Hunter Derby and the $10,000 WEC Ocala 3’ Hunter Derby. Courses for today’s classes were designed by Tucker Williams and featured a track of inviting natural obstacles. The handy round in each class offered several options for inside turns, allowing entries to show off their horse’s adjustability and rideability.

This afternoon’s $12,500 WEC Ocala 3’6” – 3’9” Hunter Derby saw 13 competitive horse-and-rider combinations ready to take on the win. Brady Mitchell rode two horses in the class and took home not only first place, but second place as well. Both horses that Mitchell competed with are owned by Float On Equestrian LLC. “Both horses are great. They have a super stride, good jumping style and are very careful,” said Mitchell.

Mitchell of Wellington, Florida, and Castle Black, a nine-year-old Mecklenburg gelding, were on fire, navigating a lovely first round with all three high options for a score of 88.

“I did all the high options with Castle Black in the first round,” recalled Mitchell. “He got a high score plus the three, which made me feel like I didn’t need to do the high options in the handy. He hasn’t been showing that much so I played it a bit safe and ended up getting a 90 base score while doing the low options, which worked out perfect.”

Mitchell and Castle Black finished the two rounds with a total of 178 for the win.

Mitchell also found success aboard Casting Call (Cornet Obolensky x Laila). Mitchell and the seven-year-old Westphalian gelding delivered a polished first round, taking zero high options and still earning a high score of 87. Mitchell and Casting Call returned for the handy and performed an effortless course, receiving a score of 88, for a total two round score of 175.

Mitchell explained, “I didn’t do the high options with him either, but they are both such fancy horses that I felt like I didn’t absolutely need to and risk losing it.”

Tracy Fenney of Flower Mound, Texas, who was the winner of this week’s $15,000 Welcome Prix, took home the third-place honors on MTM Last Word owned by MTM Farm. Fenney and MTM Last Word delivered two spectacular rounds, taking the three high options in both the first round and handy round. The duo notched an 80 in the first round and a high score of 88 in the second round, tallying a two-round score of 168.

Forty entries filled the CaptiveOne Indoor Arena for the $10,000 WEC Ocala 3’ Hunter Derby but it was Brady Mitchell who captured four top 10 placings in the class, once again filling the first- and second-place spots.

Mitchell and his own Pompidou (Pilothago x Haya Z) captured the blue ribbon in the $10,000 WEC Ocala 3’ Hunter Derby. Mitchell and the recently imported seven-year-old Westphalian gelding took the class by storm, jumping all three high options in the first round which led to a high score of 87. They returned for the handy round, flowing seamlessly through the inside turns while taking all three high options to earn the class’s highest handy score of 91, for a two-round sum of 178.

“It was his first time ever doing a handy course, and he was great,” said Mitchell. “He is amazing. He would make an incredible small junior because he has a lot of stride and is very easy to maneuver. I wasn’t worried about the turns at all with him because he is dead brave to the jumps.”

Mitchell was right behind himself with his other mount, Georgica, owned by Further Lane Farm. Mitchell and the eight-year-old Holsteiner mare produced an amazing first round, taking on all three high options to collect a score of 86. The pair resumed for the handy, jumping the three high option fences and taking multiple inside turns to secure a high second-round score of 89 for a total of 175.

“She [Georgica] is one of my favorites,” revealed Mitchell. “She has an amazing jumping style. It’s actually ridiculous how amazing it is. She has done one other class like this at WEC Ohio, and she was second in that one too.”

Mitchell, who rounded out his day with fifth place on his own Poolside and eighth place with his horse Landmann, was very grateful for such an amazing day. “I have a wonderful team behind me, and my partner Adam Graham really makes this all happen,” he expressed. “I am so grateful that I have this amazing group of people and great group of horses behind me.”

Finishing out the top three in the $10,000 WEC Ocala 3’ Hunter Derby was Megan Young of Jacksonville, Florida, and Samantha Derosa’s What D’Ya Think. Young and the 12-year-old Belgian Warmblood gelding by Lord Z x Hundred Volts delivered two beautiful rounds, taking all three high options in each class to earn a 84.5 in the first round and a 90 in the handy for a overall score of 174.