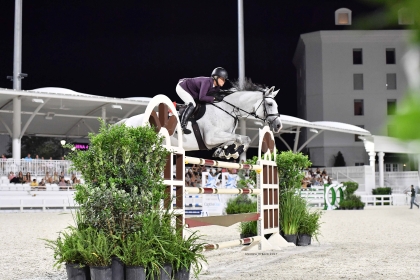 World Equestrian Center – Ocala hosted a thrilling night of equestrian sport on Saturday for the $75,000 E-Z-GO Grand Prix. Forty entries took the WEC Grand Arena under the lights to contest a course built by FEI Level IV course designer Alan Wade of Tipperary, Ireland. The technical track included a large triple bar to a difficult double combination that tested many riders throughout the night. Ten entries advanced to the jump-off but it was Tracy Fenney that swept the class, taking home first and second place.

Fenney’s first clear round was on MTM Reve Du Paradis (Crown Z x Kaline De Semilly). The pair yielded a lovely first round, not rubbing a single rail to stop the clock at 78.190 seconds making the pair eligible for the jump-off.

Fenney returned later in the order on her second double clear mount, MTM Apple (Favorit Ask x Kong’s Whopsie). Fenney and MTM Apple had previous Saturday night success, placing third in Week IV’s grand prix. Fenney and MTM Apple delivered a smooth first round, walking down the lines to stop the timers at 78.658 seconds qualifying the duo to return for the jump-off.

Fenney returned to the jump-off first on MTM Reve Du Paradis. Fenney watched a few riders jump-off before she went into the ring, “I watched Sharn [Wordley] go first. He did eight [strides] to the in-and-out and he did ten [strides] down the last line. Then Jamie [Taylor] had a nice fast round, so I was thinking I had to do the seven to the double combination to be quicker. Mike [McCormick] said to stay out a little bit wider [after fence one] to gain more momentum to fence two and [MTM Reve Du Paradis] ended up doing the seven easily.”

Fenney and the 16-year-old Selle Francais gelding flew through the rest of the course taking a tidy inside turn after the chapel fence to roll back to the liver pool. Fenney and MTM Farm’s MTM Reve Du Paradis galloped to the last line to leave out a stride to the final fence stopping the clock at 38.546 seconds, setting the pace for the remainder of the riders in the jump-off.

Fenney and MTM Apple were the second to last pair to return to the jump-off. “I was already winning but Jamie still had one horse left and she knew how fast to go because she already had one that was fast and clean. So, I really had nothing to lose with Apple.”

Fenney returned to the jump-off determined to beat her own time. Fenney and MTM Farm’s MTM Apple soared over the first oxer taking a tidy but quick turn back to fence two. The pair galloped to the double combination in seven strides, one less than other competitors. Fenney and MTM Apple soared to the chapel fence taking a tight inside turn to the liver pool. The pair galloped to the last line, to walk down the line in just nine strides stopping the clock at 38.089 seconds earning herself first and second place.

Jamie Taylor and Quatar rounded out the top three in Saturday night’s $75,000 E-Z-GO Grand Prix. Taylor and Quatar (Quidam De Revel x Amy Surprise) produced a clean and fast first-round stopping the clock at 77.252 seconds, well under the time allowed of 80 seconds. Taylor and Quatar were the seventh pair to return for the jump-off trying to chase Fenney and MTM Reve Du Paradis’s fast time. Taylor and the 11-year-old Oldenburg gelding galloped to fence one taking a very tight turn back to fence two. The pair soared through the rest of the course to stop the clock at 38.639 seconds, just behind Fenney and MTM Reve Du Paradis. Taylor also received two other top ten placings in the $75,000 E-Z-GO Grand Prix. Taylor took home eighth place on Cocoliche of Greenhill Z and tenth place on I’m Special.

An additional $5,000 was awarded to the fastest four-faulter of the $75,000 E-Z-GO Grand Prix. It was Will Simpson and his own Chacco P who received a very fast first round time of 69.580 seconds, more than six seconds faster than the second fastest four-faulter in the first-round.

The non-award winning entry that received the Luck of the Draw $5,000 prize was Kris Killam and Gangster CHS.