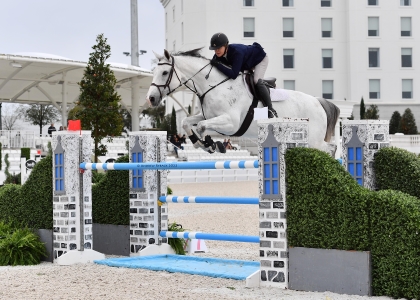 Fenney (USA) and the fan favorite MTM Apple were the sixth pair down the ramp into the WEC Grand Arena to try their hand at Cabral’s track, navigating a superb first round in 75.520 seconds.

Fenney shared her appreciation of the course, “It was a nicely stretched out course. I was shocked how nice the footing was because we had a lot of rain today. The footing here is just pristine. You can walk out in white tennis shoes a walk out with nothing on them. I don’t think anyone ever has to worry about galloping in these arenas,” said Fenney.

Fenney and the 11-year-old Danish Warmblood mare advanced straight to the jump-off, “I stayed on a straight gallop after fence one to angle out of the line and angle back in from two to three because the four got very deep. The rest just flowed right along. It is crazy how many steps you can leave out in that ring. A lot of people did eight strides to the last jump in the first round and I did the six in the jump-off. If you walked that line, and thought you could do the six there, you’re nuts. Then, you get to the jump-off and the horses just open up where it’s easy to leave that many out,” said Fenney.

Fenney and MTM Apple soared through the finish stopping the jump-off clock at 35.044 seconds, a time that was simply unbeatable. Fenney also earned fifth place in today’s class aboard her new mount MTM Campedu.

Willie Tynan (IRL) and MDM Equestrian Group, LLC’s Fenise (VDL Campbell x Wica Van De Hermitage) slotted into second place, after producing two faultless rounds. Tynan and the 12-year-old KWPN gelding rolled through the first round in 76.767 seconds toward the end of the order. The pair went straight to the jump-off, kicking up a gear to a straight gallop, stopping the timers at 35.603 seconds.

Sharn Wordley (NZL) and his own Gatsby (Simba x Daisy Cruise) rounded out the top three in today’s $20,000 C. Jarvis Insurance Welcome Prix. Wordley and the 18-year-old Irish Sport Horse stallion navigated an effortless first round in 72.427 seconds, well within the time allowed of 79 seconds. The pair advanced to tackle the jump-off, flying through the course, quickly soaring over each fence in 35.944 seconds.