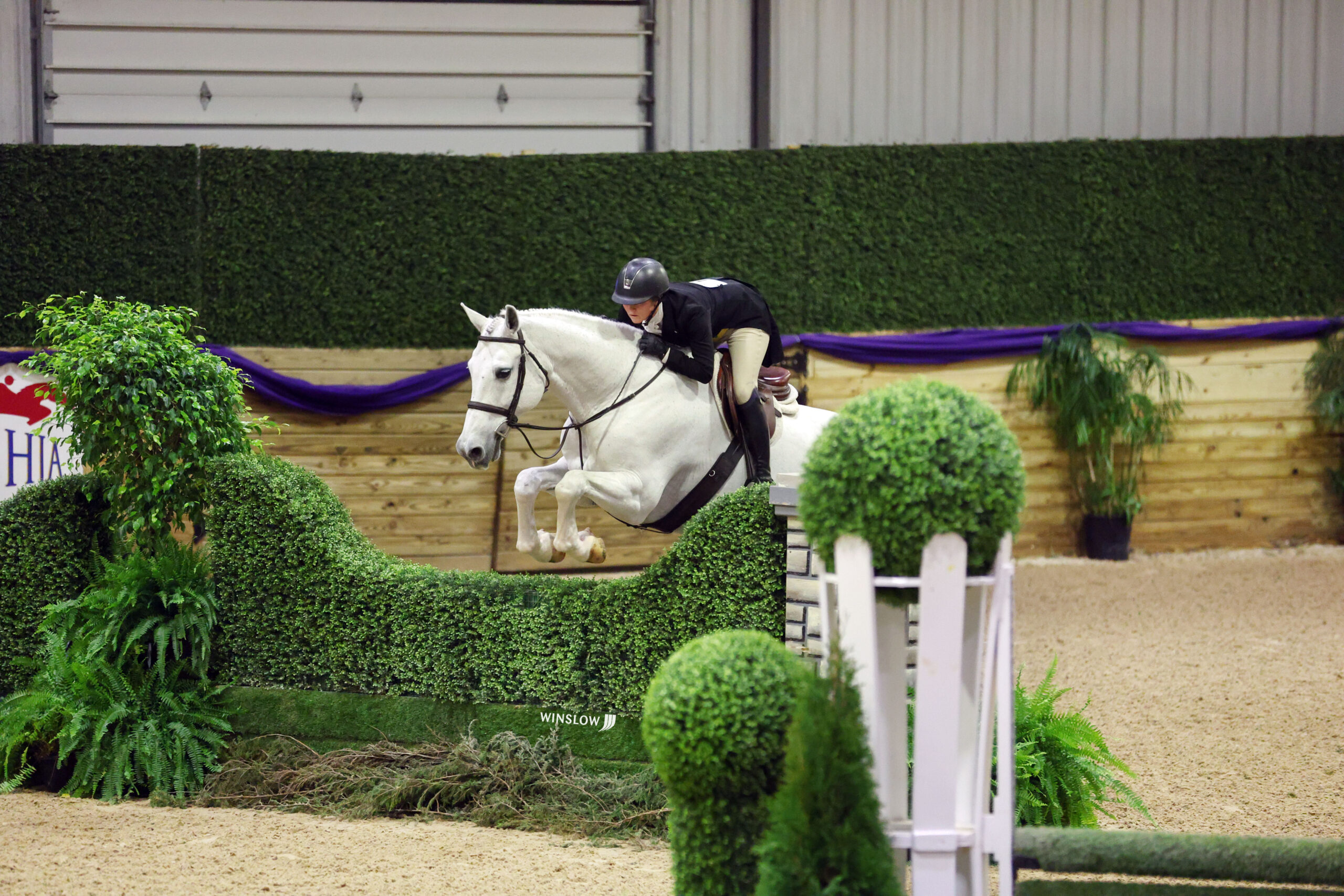 Talent was abundant on the $10,000 USHJA Hunter Derby 3′ Open course, with many scores reaching the high 80s. The twisting tracks kept riders and their mounts engaged as they navigated from one effort to the next. Each rider showed off their horses’ brilliance to the judges, but none could top Melissa Donnelly and Corlando 49 (Cartani x Olanda I).

Donnelly of Just A Folly Farm in Oxford, Michigan, and the 2006 gray Holsteiner gelding laid down a foot-perfect first-round effort, taking all four high options and earning a score of 88. Donnelly and Elizabeth Becker’s seasoned derby horse returned later for the handy round, navigating another brilliant round to earn a second 87, bringing their total overall score to 175 to win the class.

Melissa stopped to chat about today’s flowing courses and her longtime derby partner, Corlando 49. “I really liked the course and it was a change in pace this week. There were so many options. There was a lot of flow and it allowed the horses to really pay attention. I was able to show off his gallop in a few places. Overall I was so happy with him. I think all of my horses are having ‘spring fever’… they were all feeling very fresh this morning. So I was glad to reel him in and complete two great rounds. He was quite well-behaved!”

Michaella Gerlacher and Frances Conti’s Astra Road (Antaeus x Cleopatra) produced a stunning first-round, jumping all four high options to secure a score of 86. Gerlacher, assistant trainer and professional rider at Willow Way Farm and the stylish Hanoverian gelding later returned to the handy round, where they were awarded a score of 83 points for a 169 total point finish and third place honors.

The $10,000 USHJA Hunter Derby 3′ Non Pro course came up nicely for Amanda Wildauer and her own Cassano (Contendro Q), winners of the Non Pro derby during week eight of the Winter Classic series. Wildauer expertly piloted Cassano, a stunning 10-year-old Oldenburg gelding, through the course, jumping out of stride with a consistent pace that earned the duo an 88 in the first round. The pair’s handy earned an impressive 92, for a grand total of 180 points to top the judge’s cards.

We chatted ringside with Amanda Wildauer about her strategy for the class and her horse, Cassano. “I focused on maintaining a forward canter and keeping him straight so that he would jump well for me. He is such a sweet boy in the barn and I’ve had him for four years. He is so snuggly while you’re tacking him up or grooming and he loves to be hugged back!”

Just one point shy away from securing the win was Anneliese Kolaska of New Albany, Ohio, and Herr Drosselmeyer. She and the 14-year-old Oldenburg gelding make frequent trips in the Non-Pro derby ring and recently secured a win during week 10 of the winter series. On today’s course, they produced first-rate rounds that were honored with scores of 89 and 90, totaling 179 for second place.

Rounding out the top three placings were Madeline Brooks and her own Cris Van De Helle (Cristo x Florid II). Brooks and the sixteen-year-old Holsteiner gelding were poised and in rhythm throughout both determining rounds, earning scores of 82, 83 and a 165 total to take home third.