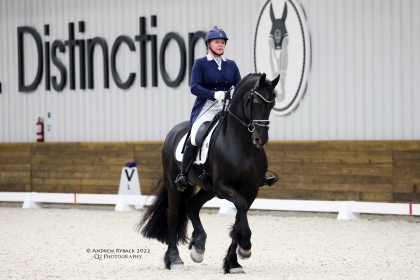 The USDF Gold medal rider picked up four wins, a second and a fourth place with her three unconventional horses, Ruben, Hadrian Interagro and Hawk Interagro. Ruben, a 17-year-old Friesian stallion, was unbeaten in his two starts, logging a top score of 73.125% in the freestyle.

“I always love riding the freestyle with the Friesian because he’s so dynamic and different,” said Vernon, who came across the horse when he came in for training and ended up buying him for herself and training him to CDI grand prix. “We have really cool music which everyone loves — it’s Pink — and even if the judges don’t love it, the crowd goes wild.

“It’s fun with a horse like a Friesian that you don’t necessarily expect to see in the grand prix ring, and I’ve brought many of them up the FEI levels. I like their temperament and trainability, as well as their looks. I like something a little different; there are a thousand bay warmbloods going around the ring. I suppose technically they’re not dressage horses, so they have their weaknesses, but over the years I’ve figured out how to make it work and it’s exciting.”

Hadrian Interagro and Hawk Interagro are also both a little different, both being Brazilian-bred Lusitanos. Vernon has shown the 11-year-old Hadrian — who logged a plus-65% win and a second place at Dressage XIII — all the way from First Level up to international grand prix.

“I’ve had him about five years, and we did our first CDI at WEC at the end of last year,” said Vernon. “It was my very first CDI experience which was amazing and awesome and definitely a learning experience, but we did really well and were placed. I totally love Hadrian; he has all the energy and the pizazz so he’s been really fun to develop.”

Not to be outdone, Peggy Nagler’s Hawk Interagro achieved the 63% score he needed to qualify for freestyle at the level.

“This was Hawk’s second show at grand prix, so we’re just getting our feet wet at the level,” explained Vernon. “Now we have the open gate to put a freestyle together for him, which I am so excited about.

“These other breeds can have their shortcomings, but what it really boils down to is the quality of the training,” continued Vernon. “If you can make all the small pieces work, you get points for that. You may lose points in the walk compared to a warmblood, but if you can hit all the markers and get all the details right, you’ll be just fine. It’s great fun.”

Vernon, who is originally from Wisconsin, bought her farm in Ocala more than 10 years ago. She is immensely grateful for the enrichment of the area that the addition of the World Equestrian Center has brought.

“It’s been an absolute game-changer,” she enthused. “I’m lucky to have been here at the right place at the right time — we are 20 minutes from WEC — and for all the opportunities that this facility has given us. No expense has been spared, and I would probably never have done a CDI if it wasn’t at WEC. I had the best experience.”

Pamela Aide brought a clutch of horses across the levels to Dressage XIII.  She rode Satisfaction HW in the seven-year-old division and brought out both Brunello and Bon De Niro at grand prix level. Satisfaction HW, who is by the Sandro Hit son Sunday and out of a Schumacher mare, was awarded 70.4% in Friday’s FEI 7-Year-Old Quality class, marking Aide’s high score of the weekend. Bon De Niro and Brunello picked up podium places at top level.