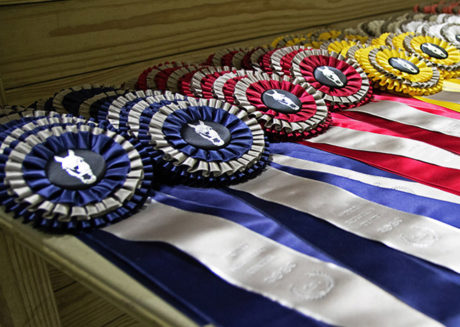 WEC Summer II hosted top hunter/jumper competition throughout the week, with multiple feature classes including nine hunter derbies, a welcome stake, a futures prix and a grand prix. All classes featured tough competition with many top finishers separated by just one point or under one second. We would like to thank everyone for their efforts this week to stick to COVID-19 guidelines and protocols set out by WEC and USEF, both in and out of the ring.

Thursday’s $5,000 Welcome Stake 1.35m sponsored by CWD Sellier saw a fantastic win for Doug Boyd of Sapphire Riding Academy in Libertyville, Illinois and Sapphire Riding Academy’s Berkley III (Pall Mall H x Resina). The pair bested a field of 16, taking first place by just one-tenth of a second. Boyd and the 14-year-old Dutch Warmblood gelding were quick in the first round, jumping clear in a time of 86.689 seconds, well under the time allowed of 90 seconds. The pair continued straight to the jump-off of the Table II 2b event, picking up even more pace and stopping the clock at 40.551 seconds, ultimately taking first place.

The  3’6″-3’9″ section of Thursday’s $2,000 Green Hunter Derbies belonged to Michael Britt-Leon of Windsor Stables in Alpharetta, Georgia who dominated the class with five of the six entries. Britt-Leon found great success with many of his mounts and took first place by one point with Kelly Sims’ Private I (Corrado x Verdi), an 8-year-old Oldenburg gelding. The pair earned scores of 86 and 70 for a total score of 156 to top the class.

The 3’0″-3’3″ section of the $2,000 Green Hunter Derbies on Thursday saw 15 entries, with David Beisel of David Beisel Stables in Goshen, Ohio and Lori Taylor’s  MTM Bentley (Bonaparte Z x Hot Cherie P) continuing their winning streak from last week. Beisel and the 6-year-old Danish Warmblood gelding earned scores of 83 and 84, bringing their overall total score to 167 for the blue ribbon.

Derby action continued on Friday with the $5,000 Open Hunter Derby where a field of 24 entries was topped by amateur Hannah Eddlemon of Wilmington, Ohio and Roberts Stables, LLC’s Snowbird (Vingino x Vegannie). The pair won the inaugural Child/Adult World Equestrian Center Premier Cup Classic this past fall at World Equestrian Center, taking home a 2019 Chevrolet Blazer for the win. They demonstrated the same poise from that victory in Friday’s derby, earning a pair of 88 scores for a total score of 176, taking home another win.

Saturday saw an exciting $25,000 WEC Grand Prix where Kady Abrahamson of Abrahamson Equestrian, LLC of Georgetown, Kentucky and Ocala, Florida, and Abrahamson Equestrian, LLC’s Maraca LS La Silla (Quintero La Silla x Marimba La Silla) stole the win at the end of the class by just one-tenth of a second. Abrahamson and the 13-year-old Belgian Warmblood mare navigated a clear first round in 75.921 seconds, then returned for the jump-off to jump a second clear round in 38.781 seconds for a first-place finish.

The $7,500 Futures Prix 1.30m sponsored by Voltaire Design saw a thrilling win on Saturday for Izabelle Quadracci and her own Tipperary Hill. The pair was quick and clear in the first round in a time of 77.401 seconds, then continued straight to the jump-off, jumping a second clear round in 35.414 seconds, taking the win by about one-half of a second.

Saturday’s $2,000 Non Pro Derby 2’6” saw 23 entries over an inviting course, but it was Aubrey Ciriello and her own Have You Been Good (Do You Have A Minute x Hope To Be Good) who claimed the top spot by one point. Ciriello and the 13-year-old Quarter Horse gelding earned a first round score of 75 before returning for the handy round to score an 81 for a total score of 156, winning the class by one point.

Madison Orr of Canton, Georgia and her own Dreamgirl’s Legacy (Heartbreak x Dreamgirl) emerged victorious in Sunday’s $2,000 Amateur Owner Hunter Derby. The pair placed eighth in Friday’s $5,000 Open Hunter Derby, preparing them well for today’s class. Orr and the 4-year-old Oldenburg mare were flawless in the first round, earning a score of 85. They returned for the handy round, laying down another foot-perfect course for a second score of 85, bringing their overall total score to 170, ultimately winning the class.

Elizabeth Nestor earned top honors in the $2,000 Junior Hunter Derby, taking first and second place aboard her own At Last (Last Man Standing x Jugundii) and Covert (Christ), respectively. Nestor and At Last, a 14-year-old Mechlenburg gelding, earned scores of 87 and 84 to top the class. Nestor and Covert, an 11-year-old Warmblood gelding, earned scores of 85 and 80, totaling 165 for a second-place finish.

Emma Rupinski owned the $2,000 Pony Hunter Derby riding three of the five entries and taking home the blue ribbon aboard RGG Equestrian, LLC’s 14 Karat. The pair was impressive in the first round, earning a score of 80. Rupinski and the 8-year-old Welsh Pony Cross gelding returned for the second round scoring a 76, bringing their two-round total to 156 for the win.

The $500 Adult Hunter Derby saw a fantastic win for Kathryn Kraft of Zionsville, Indiana and her own Evergreen. The pair kept a consistent rhythm in their first round for a score of 78. When they returned for the handy round, Kraft and the handsome 16-year-old gelding took inside turns where possible, earning a score of 81.5 and bringing their total score to 159.5 to win the class.

Samantha Karp of Great Falls, Virginia and Redfield Farm’s Van Gogh (Odermus R x Nimmerike) topped Sunday’s $500 Children’s Hunter Derby. The pair delivered a smooth, flowing first round for a score of 82, then returned for the handy round, taking inside turns and keeping forward motion for a score of 73. Their score totaled 155, sending them into first place.

Congratulations everyone on a great week! See you in August!