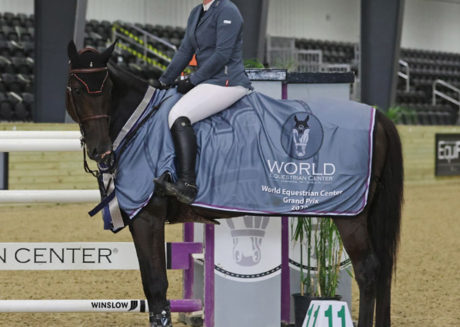 The WEC Summer II show continued today with three exciting feature classes. The $25,000 WEC Grand Prix and the $7,500 Futures Prix 1.30m sponsored by Voltaire Design brought thrilling wins to the Sanctuary Arena, while the $2,000 Non Pro Derby 2’6″ took over the lower hunter ring in the outdoor complex. The theme for today’s classes was “winning by one”, with first place finishers in all three feature classes winning by one-tenth of a second, one-half of a second or one point.

This afternoon’s $25,000 WEC Grand Prix hosted a field of 22 entries over a track of 15 jumping efforts designed by Bobby Murphy of Lexington, Kentucky. The course featured a triple combination, forward lines and inside turn options in the jump-off. Four entries advanced to the jump-off and three were double clear, but it was Kady Abrahamson of Abrahamson Equestrian, LLC of Georgetown, Kentucky and Ocala, Florida, and Abrahamson Equestrian, LLC’s Maraca LS La Silla (Quintero La Silla x Marimba La Silla) who stole the win at the end of the jump-off by about one-tenth of a second.

Abrahamson and Maraca LS La Silla took fifth place in last week’s $25,000 WEC Grand Prix with a double clear round, preparing them well for this afternoon’s class. Abrahamson and the 13-year-old Belgian Warmblood mare were careful and precise in the first round, jumping clear in a time of 75.921 seconds, still well under the time allowed of 79 seconds. The pair were last to return on the short course and turned up their speed as they headed for the first fence. They hugged each inside turn and left out strides, stopping the clock at 38.781 seconds for the win.

Just behind Abrahamson were Kirk Webby and Tolleshunt Investment Group’s Brando Du Rouet (Baloubet du Rouet x Carieny Z). The pair was quick and clear in the first round in a time of 73.234 seconds and were first to return for the jump-off. They set a fast pace, jumping clear in 38.820 seconds, ultimately finishing second by one-tenth of a point.

We caught up with Abrahamson after the class to chat about her win, “I’ve had Maraca LS La Silla for two and a half years. She came to us as a bit of a problem horse. She’s kind of like a grenade, she’ll go off at any moment. I sent her to Scott Keach, who I train with, for the first year and a half that we had her because she was a little bit nervous, scared and unrideable. I started riding her last summer while Scott was in Spruce just flatting her, and I fell in love with her. I showed her a couple of times. I rode her until this winter, then I sent her to Sharn Wordley, who I also train with. He’s ridden her for the past six months to build her confidence. I just got her back about three weeks ago. We planned to keep her in the 1.30m classes, but I jumped her in Chicago and it was really convincing. I brought her to WEC last week and did the grand prix, and she was double clear and placed fifth, so I brought her back this week.”

When asked about her plan for the jump-off, Abrahamson replied, “She jumped great. She was clear in the first round, then Kirk set a really fast pace in the jump-off. I asked my best friend Keely McIntosh to watch the numbers to see what everyone else was doing. There were two entries that were double clear when I went into the jump-off, so I thought that I would just give her a nice ride and be third. I planned to do the same numbers as everyone else, then I ended up leaving out a stride in both spots. I heard Keely’s mom yell, ‘Come on, girl!’ from the ingate as I was heading to the last jump and that made me pick up the pace and leave a stride out.”

“Today is my mom’s birthday. We were at brunch today and she told me that all she wanted for her birthday was a win. She got her birthday present,” added Abrahamson. “I also want to thank Keely McIntosh, Matt Wildung, Sharn Wordley, Scott Keach, my parents, and Keely’s mom, Jenny Booth.”

The $7,500 Futures Prix 1.30m sponsored by Voltaire Design saw a very similar outcome in placings to that of the grand prix. Izzy Beisel of Goshen, Ohio and David Beisel’s Ammeretto (Numero Uno x Ranna) set a tough time to beat with double clear rounds early on in the class, then Izabelle Quadracci and her own Tipperary Hill swept in later in the class to steal the win by about one-half of a second.

Beisel and Ammeretto were one of the first entry of the class, jumping a clear first round in 78.388 seconds, then continuing straight to the jump-off of the Table II 2b event to navigate a second clear round in an impressive 35.892 seconds. Their time appeared unbeatable until Quadracci and Tipperary Hill took to the course. The pair took several top placings in the Futures Prix throughout Winter in the Midwest circuit at World Equestrian Center, but had yet to secure a win. Quadracci and the fiery chestnut mare were quick and clear in the first round in a time of 77.401 seconds. They continued straight to the jump-off, blazing through the course, keeping their pace and taking tidy inside turns. The duo stopped the clock at 35.414 seconds for the win, moving Beisel and Ammeretto into second place.

Quadracci took a few minutes to chat with us ringside after the class, “The track was awesome and the footing was great. Tipperary Hill has been jumping great the past two weeks, so I knew that if I stuck with my plan that she would be good. It came to the jump-off and I saw how fast Izzy went, so I said, ‘Let’s do it!’ I knew I had to give it a shot.”

When asked about her mount, Quadracci commented, “I’ve had her for four years now. She brought me from the High Child/Adult to the 1.30m. She couldn’t be any better to ride. She’s a little sassy at home, but she’s a chestnut mare. She’s always so game to win and I wouldn’t trade her for the world. She’s honestly the best partner ever.”

She also added, “I want to say thank you to my trainers Kathleen Caya and Natalie Hansen of Integrity Farm. I couldn’t do it without them. Their support and training has helped me so much.”

Today’s $2,000 Non Pro Derby 2’6″ saw 23 entries compete over a beautifully designed course featuring stacked barrel standards, hay bale islands and plentiful greenery. Competition was tight, but it was Aubrey Ciriello and her own Have You Been Good (Do You Have A Minute x Hope To Be Good) who claimed the top spot by one point.

Ciriello and Have You Been Good regularly take top placings in the Intermediate Adult Hunters, preparing them well for today’s derby. The pair were steady and accurate in the first round, earning a score of 75. Ciriello and the 13-year-old Quarter Horse gelding returned for the second round, showing off their handy ability for a score of 81. This brought their total score to 156 to ultimately win the class.

Joni Westerhouse and her own Just Nick were just behind Ciriello and Have You Been Good in the $2,000 Non Pro Derby 2’6″. The pair earned scores of 81 and 74 for a total score of 155, claiming the second place spot.