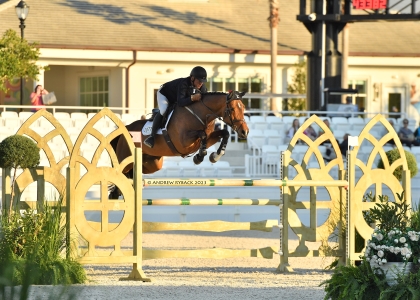 Ocala, FL – It was another action-packed day during the 2023 Winter Spectacular Show Series at World Equestrian Center – Ocala as an impressive field of 24 competitors from six different nations vied for the ultimate prize in the $24,000 C. Jarvis Insurance Welcome Prix. After a thrilling ten horse jump-off, it was Olympic Gold Medalist Will Simpson (USA) and his partner Whoop De Doo (Mr. Whoopy x Double Trouble X) owned by 5 Roosters that snagged the victory.

FEI Level III course designer Ben Townley of Great Britain crafted the opening tracks that showcased three imposing double combinations and several wide oxers. An even ten representatives ultimately qualified to return for the short track while only half managed to yield a double clean effort.

The first two returning entries were taken out of the top placings after incurring a set of faults. Richard Spooner’s performance aboard Molly Ohrstrom’s Halcon produced the first double-clean effort of the class and put the pair to the top of the leaderboard with a time of 39.962 seconds.

Dorothy Douglas was quick to up the ante aboard Davenport Farm’s MTM Pablo (Perigueux x Celina). Douglas and the ten-year-old Warmblood gelding soared through the short course, finishing just two tenths of a second faster than Spooner and Halcon in 39.695 seconds.

Daniel Bedoya (BOL) and Jumpstar Uno gave a solid effort and stopped the clock at 43.352 seconds with all rails up to ultimately secure fifth. Taylor Marie Land and Get Go found an efficient track but had a pair of rails down for eight faults which was good for seventh place.

Tracy Fenney was next in aboard the infamous MTM Apple (Favorit Ask x Kong’s Whopsie) owned by MTM Farm. Fenney opened up the 12-year-old Danish Warmblood mare’s giant step to soar across the jump-off track clear in 37.982 seconds, shaving nearly 2 seconds off of Douglas and MTM Pablo’s time.

Will Simpson (USA) and Whoop De Doo were the second to last pair to attempt Townley’s track. Simpson had a change of plans for the jump-off after watching a few of his fellow competitors, “Spooner did the seven beautifully in the first line. Whoop De Doo has such a quick step, I was thinking of doing the bowing seven, because I knew we could be just as fast as the horses that did six.”

“But, then, Tracy went in on Apple and that pair know each other like the back their hand. She walked down the six in the first line, then was super tight back to the vertical. Then she went ahead and did six to the double combination, which I didn’t even think of doing and I didn’t want to go there quite yet,” laughed Simpson.

“After I watched that, I knew I had to do the six. ‘Whoopie’ rose to the occasion and marched right down the line with her big stride and got right to the base of the second jump. At that moment, I knew it was game on,” said Simpson.

Simpson and the 12-year-old Warmblood mare raced around the track finding each fence out of stride in 37.092 seconds to slide into the first-place spot on the leaderboard.

For Simpson, this was a monumental day for the talented Whoop De Doo, “We took a lot of time bringing Whoopie back. She’s been trending to be back in top form for a while now, and today it felt like she really broke through. It feels like she is going to stay this way through the rest of the circuit, because I could tell she really enjoyed having that cooler put on her for the victory gallop.