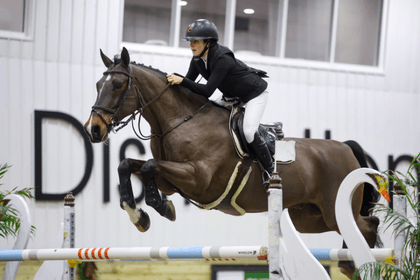 Wilmington, Ohio – This week’s Wilmington Sunday Spotlight shines on 15-year-old Rebecca Gutstein of Glencoe, Illinois. The accomplished junior athlete trains out of Old Barrington Farm and has established herself as a promising talent with her two incredible jumpers. Gutstein stole the spotlight during Winter Classic #5 with her $30,000 WEC Grand Prix win and second place finishes in the $10,000 Welcome Stake and $10,000 Futures Prix. With these top wins under her belt she has emerged as a strong contender amongst the seasoned group of professional athletes competing at World Equestrian Center – Wilmington this winter. We caught up with Gutstein to learn more about her riding career, her string of horses and her future plans.

WEC: How did you get started riding?

I used to live in Scarsdale, New York and there was a pool that I always used to go to in my town. There was also a barn right next to it and you could kind of see the barn from the pool. So, I was about four years old and I just remember, looking at it and really wanting to try it! So, I told my mom that’s what I want to do, and my parents are from the city, so they were unfamiliar with the sport. It took six months of me begging my parents to do it and then they said that when I first got on a horse, I was smiling so much that it was just clear that this was what I was going to do forever!

I leased a pony for six months, just to do the short stirrup and then I just went right into the jumpers. I just knew that’s what I wanted to do. I saw it at the shows and I was just obsessed with it. So, my first jumper’s name was Taz. He was a Thoroughbred and he was 19 when I had him. I just leased him for a little bit and he just showed me the ropes. He was the best and I just really just fell in love with the jumpers from him.

WEC: How has WEC Wilmington played a role in your riding career?

I’ve been coming to WEC Ohio since I was 11 years old. I’m a sophomore in high school now and I started coming here when I was in sixth grade. It’s just such a nice facility, the footing is amazing, and I love how big and open the arenas are. It really doesn’t feel like you’re inside at all. I’ve experienced a lot of stepping stones here. This was only my second show when I was 11. When I came here on my horse, I won the Low Children’s Jumper Classic. I remember how happy I was. It’s taken me from that to my first Grand Prix this past December. So, it just meant a lot to me. It is really nostalgic to come back here now and to remember all of the shows and how far I’ve come.

WEC: Tell us about your current string of horses.

My first one, who I got second in the Welcome with, is Completely Nuts aka “Nuts.” This is my third year showing him and he is just everything that I could ask for. He brought me from just starting in the Low Junior Jumpers to doing the Medium Junior Jumper classics. He is just so cute, and he loves attention. Whenever I get off of him, he refuses to move until he gets cookies, and he is very stuck in his routine! He is a total treat monster. He takes the best care of me.

My second horse is Harley David and I did my first Grand Prix on him here at Winter Classic #2 in December. Harley is 16 this year and I’ve been leasing him for about a year and a half. He’s also just such a good boy. He really took care of me is naturally a quick horse across the ground. He’s definitely a skimmer over the jumps which saves us a lot of time. He does have this little kick out that he does, he just does it all the time! Harley knows how to smile as well. I did my first High Junior Jumper class on him and my first Grand Prix on him.  He means a lot to me.

I have my sister’s horse here this week as well, E-Boy. We did the age group equitation, the Maclay and the Jump Seat Medal. I’m really grateful I was able to show him. He’s the sweetest horse you’ll ever meet and sometimes I feel like he doesn’t really know how big he is! He has such a nice canter and such a nice jump. It is relaxing to ride him, and I feel like I can take a deep breath.

WEC: How frequently do you show?

I’ll probably show once in May, a couple of times in June, and a couple of times in July. The past two years I’ve been going to Traverse City to do young riders [FEI Jumping North American Youth Championships]. I did the Children’s one two years ago and then I just did the Pre-Junior, and my goal this year is to do the Juniors. But when I’m in Florida I’ll do two weeks on one week off, so I fly back and forth with school. It is definitely a lot to manage with my schoolwork because I am in a lot of honors classes, but I love it so much. I wouldn’t want to be doing anything else.

WEC: Tell us about who you ride with now and your barn and how long you’ve been there.

I ride at Old Barrington Farm with Amelia McArdle. This is my third year with her. I love that barn so much. Amelia is an amazing trainer. She’s taught me so much about everything, she’s made me into such a good rider. I love taking lessons and I love going to barn.

WEC: What is your 2023 show plan and what are your goals?

I’m definitely I’m going to Florida and then I’ll do two weeks on one week off until the end of circuit. I think my goal there is to probably move up to do some of the High Junior Jumper classes. Maybe some of the classics too. I also just want to do the National Grands Prix when I show in Kentucky and Lamplight. In August, I will probably do to Junior/Young Rider Championships again.

Thanks for speaking to us Rebecca! We wish you continued good luck with your riding!