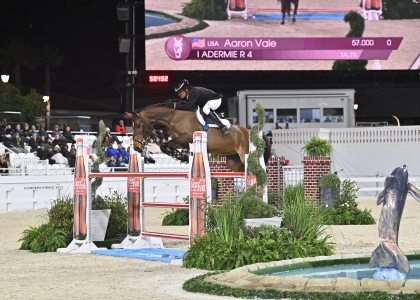 Ocala, FL – The $100,000 Coca-Cola Beverages Florida Grand Prix was the highlight event of week II during the 2023 Winter Spectacular Show Series at World Equestrian Center – Ocala. Chilly temperatures couldn’t freeze out the crowd or competition as the stands were packed to watch a strong field of the world’s best compete for the lion’s share of the prize money under the lights in the WEC Grand Arena. Aaron Vale saved the best for last as he piloted Lori Osterstock’s I Adermie R 4 (Den Ham Blue R x W.Adermie 1) to triumph.

An international field of 32 horse-and-rider combinations representing nine different nations competed over a course set by world-renowned FEI Level III course designer Ben Townley of Great Britain. Nine were able to find the path to a clear first round to qualify for the jump-off.

“The first round was nice. There were a few tricky fences spread throughout the track, that caught quite a good number of riders. The combination away from the ingate and the Antares vertical coming home had the most down. Overall, I think it ended with the perfect number for the jump-off,” expressed Vale.

Daniel Geitner (USA) and Bryn Sadler (USA) followed, but both incurred faults. Next in was Aaron Vale (USA) and his first jump-off mount, Cristo Beech (Its The Business x Ragua) owned by Thinkslikeahorse and Alise Carrico.

Vale and the 12-year-old Warmblood gelding put forth a stellar performance in 38.584 seconds to slide into the first-place position on the leaderboard. “’Cristo’ is getting better and better. He has been jumping a lot of clear rounds lately and he has been getting faster during each jump-off,” stated Vale.

“He’s a very careful horse, so I have to be a bit cautious to not make a mistake to set him back, but I can feel that he is trusting me more and more. I was pretty quick on him, but I could have been more efficient to the Lugano oxer. He jumped up and took too much time in the air which set us back, but other than that I was happy with our round.”

Jacqueline Ruyle (USA) and her own San Chano (Sandro Boy x Carusa) were the next pair down the ramp to try and snag the fastest time. Ruyle and the 14-year-old Oldenburg gelding put forth a stellar effort in a blistering 38.370 seconds to snag the lead.

Next in was Richard Spooner (USA) and his own Quirado RC who navigated a seamless jump-off track, but had a heart-breaking rail at the final fence to eventually earn eighth place. Thursday’s Welcome Prix winners Will Simpson and Whoop De Doo also put forth a good effort but suffered an unfortunate four faults.

Rowan Willis (AUS) and his own 12-year-old Warmblood mare Wellington Grey Goose (Corlensky x Grandira) were the second-to-last pair to attempt to find the fastest track in the jump-off. The pair made a bid in the long run to final vertical, but they crossed the timers just off the pace in 39.433 seconds for fourth.

Aaron Vale had one last attempt to try and snag the winning time aboard the ten-year-old Dutch Warmblood mare I Adermie R 4.

“After Jaci beat me by more than a second, I knew I had to really take my chances,” said Vale. “I Adermie R 4 is a bit smaller of a horse with a smaller step, so I had to gallop from one to two to get the nine done. She was balanced enough to fence two where I could grab the right rein and begin turning before we landed to get to the double combination. I think I did one less to the double than everyone else, then we were really fast back to the Lugano oxer. I did take a bit of a liberty to the navy fence, but she knew it was game on and cleared it. That gave me a little bit more room to the next jump, so I could move up to the final vertical.”

Vale and I Adermie R 4 flew around the jump-off track as the crowd roared stopping the clock at 37.412 seconds to seal the first-place finish.

Vale spoke about the talented mare, “[I Adermie R 4] has been very consistent. She was second here last week, won a grand prix over the summer and won a class last winter. She never lets me down and always comes out to play.”

An additional $5,000 was awarded to the fastest four-faulter of the $100,000 Coca-Cola Beverages Florida Grand Prix. Santiago Lambre (BRA) and Casey received the award with an incredibly fast time of 72.857 seconds with one down.

Avery Erickson received the $5,000 ‘Luck of the Draw’ award.