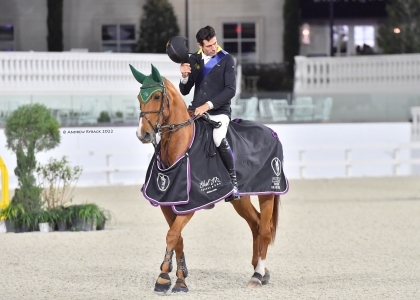 Highlights from last week include Rowan Willis (AUS) and Blue Movie besting an international field of 35 riders to take the victory in the $100,000 Ethel M Chocolates Grand Prix on Saturday night under the lights. Santiago Lambre continued his hot streak on Thursday taking home first and second place in the $24,000 C. Jarvis Insurance Welcome Prix. Read on for additional highlights.

On Sunday morning, Santiago Lambre and his new mount, Nono VD Withoeve owned by All In Horses and Jan De Waard snagged the first-place spot on the leaderboard in the $10,000 1.40m Jumper Classic.

“’Nono’ just arrived this week. This was our first show together and he’s proved himself to be very careful. I showed him the last three days and he hasn’t touched one fence. He’s still a little green, but I think he is going to be a very competitive horse.”

Rowan Willis (AUS) and his own Blue Movie earned a sweet victory on Saturday night in the $100,000 Ethel M Chocolates Grand Prix.

“I always knew Blue Movie was going to be special, ever since she was a foal. It took me a very long time to figure her out, but my patience has paid off. She has taken me all around the world and been a life-changing horse for me.”

“When I decided to make the tight inside turn to the World Equestrian Center vertical, Halcon just rolled back and made it seem like it wasn’t a big deal. I never practice turns like that, and for a young horse to be able to navigate such a tight turn and do it so relaxed is very rare.”

“My plan was to not out handy myself. I spoke with Liz [Reilly] before I went in, and she told me to focus on consistency because it was my first time riding him. I ended up doing a few inside turns but nothing too crazy because we were ahead and didn’t want to risk anything.”

“I have been riding ‘Moose’ for five years now. This is his only job. He shows up, does the derby then is back outside within the hour. He knows his job and he does it very well.”

“I enjoy riding the hunters. It’s nice to have a change of pace and scenery once in a while. Victor was perfect, he made the courses so much fun to ride and he does his job well.”

“I did eight strides from one to two. The seven was possible, but fence two was a bit spooky. Then I left out a stride from the green vertical to the C. Jarvis vertical. Casey has such a big step, she was easily able to leave out a stride.”

Congratulations to all competitors on a successful week of equestrian sport! We hope to see you all back soon for the final two weeks of the 2022 USEF Fall Show Series starting December 7.